Kino // Unrated // October 20, 2020
List Price: $24.95 [Buy now and save at Amazon]
Review by Stuart Galbraith IV | posted November 10, 2020 | E-mail the Author
A Poverty Row horror film starring Boris Karloff, The Ape (1940) is cheap but amusing in its ridiculousness. The outrageous premise was a feature not uncommon with these low-budget offerings from Monogram (which produced this) and Producers Releasing Corporation (PRC), though Karloff delivers a surprisingly sincere performance, not always the case when the actor held the material in contempt. (In 1944's The Climax, for instance, it's obvious Karloff loathes the script, and his performance is glaringly uncaring in that sleep-inducing thriller.)

The basic plot is a variation of a type Karloff and others had been chu ing out for several years. After its classics-filled "first-cycle" of 1931-1936, horror movies briefly fell into sharp decline - indeed, all but vanishing for a few years - partly because of new restrictions imposed by the Production Code, and partly due to Britain's virtual ban of horror films. Actors like Karloff and (Bela) Lugosi had to look elsewhere for work, and in Karloff's case he signed multi-picture deals at Columbia, the lowliest of the major studios, and the even less reputable Monogram, purveyor of ultra-cheap second features.

At Columbia he starred in The Man They Could Not Hang (1939), the first of a series of similarly-plotted mad scientist films, several of which portrays Karloff's character as a basically kindly, often once-respected scientists engaged in outside-the-box experiments. (He'd previously played a similarly sympathetic inventor in Universal's 1937 sci-fi crime film Night Key.) The Ape functions in a similar fashion. 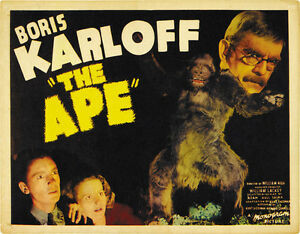 In The Ape, Karloff is kindly Dr. Be ard Adrian, discredited scientist-physician, determined at all costs to find a cure for polio, though it's never called that in the film. (Adrian's wife and daughter died from the disease, we're told.) He's been experimenting with spinal fluid taken from local dogs stolen from various neighbors' backyards, ea ing him the wrath of the local townsfolk, but it's all to help young Frances Clifford (Maris Wrixon) walk again.

The circus is in town (or at least stock footage of one), where an abusive animal trainer (I. Stanford Jolley) is mauled by an escaped gorilla (Ray "Crash" Corrigan). Whisked to Adrian's clinic, the injured trainer lies helpless as the scientist taps his spine for fluid rather than attempt saving him, Adrian's mixture later showing promising signs with Frances. But then in clumsy plotting Adrian foolishly allows his test tube of fluid roll off a table and shatter on the floor. Oops. Where to get more fluid?

Providentially, the mad ape breaks into Adrian's lab and the scientist stabs it to death. A-ha, thinks he, and in that aforementioned outrageous premise, Adrian skins (offscreen) the gorilla, masquerading as the crazed primate to murder other victims for their fluids, the blame falling on the hapless animal.

Like many of these cheap Monograms and PRCs, the script often makes no sense. For instance, the local kids are mercilessly cruel to the gentle doc, taunting him and breaking windows with thrown rocks. Why? No explanation is offered. Most of the town hates him, too, apparently because he couldn't save patients stricken with incurable paralysis some years back. Adrian's ping-pong like personality, a selfless caregiver one minute, a cold-blooded violator of the Hippocratic Oath and ape-skinner the next, is perhaps the most extreme in Hollywood horror.

The Ape is both slighter better and slightly less entertaining than later, loopier low-budget offerings featuring Lugosi and others, particularly George Zucco and John Carradine. Karloff's good performance versus their floridly theatrical ones somehow makes The Ape less fun, though it's still quite enjoyable for what it is, and at 61 minutes, it's not like a great investment in one's time.

Kino's 2K remastering of The Ape, derived from British film elements, complete with British Board of Film Censors card and slightly altered titles to reflect its UK distributor, is a real treat for fans of this type of film. Although public domain copies on DVD of The Ape look better than many other PD titles of this vintage, the image here is pretty close to what we're used to seeing with classic Universal horror titles, not cheapies like this. The English DTS-HD (mono) audio is also above average. Optional English subtitles are provided on this Region "A" encoded disc.

Supplements include two (count ‘em, two) audio commentaries, one featuring Tom Weaver the other with Richard Harlan Smith, both worthwhile, particularly Weaver's, whose Poverty Row Horrors! book makes an invaluable companion to movies of this type.

As a movie, The Ape rates no better than two stars, but its eye-opening 2K transfer and the aforementioned commentary track make this a must for horror fans. Highly Recommended.