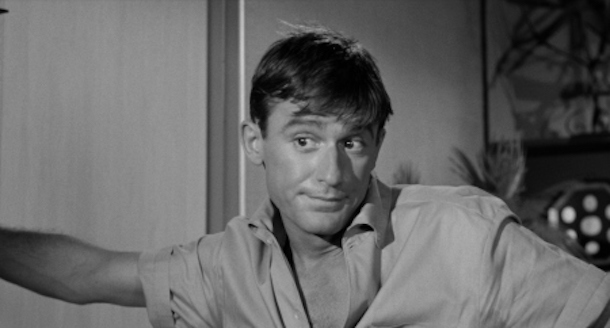 About thirty minutes into George Axelrod's 1966 teen comedy Lord Love a Duck, I found myself exclaiming out loud, "What is this movie about!?!" Not that I wasn't having fun or eagerly lapping up the hilarious performances. I just wasn't sure what exactly this thing is supposed to be. As DVD Savant asked in his review of the 2003 DVD release, "How to analyze a purposely unanalyzable movie?"

The befuddlement may start with the film's central character, who is not like most movie characters. His only drive seems to be disrupting the middle-class silliness he sees around him. He is high school senior Alan Musgrave, aka "Mollymauk" ("a bird thought to be extinct, but isn't"). He is played with impish glee by Roddy McDowall. Alan is not like the milquetoast heroes of writer-director Axelrod's earlier hit plays-turned-films, The Seven Year Itch and Will Success Spoil Rock Hunter?. Alan is an oddball, but he seems smarter and better adjusted than everyone around him -- an omnipotent hipster that Ferris Bueller wishes he could be. But, like Rock Hunter and that Itchy fellow, even Mollymauk is not immune to the charms of a pretty blonde girl.

Tuesday Weld is Barbara Ann Green, a fetching young cheerleader who is used to being the big fish in a small pond but who just wants, well, MORE. Alan agrees to facilitate all of Barbara Ann's dreams, in exchange for... what, exactly? Alan reads as asexual (or sometimes, thanks to McDowall's urbane attitude, a bit camp), but one must assume he harbors a crush to which he won't admit.

This repression of his feelings is part of the point surely. At one point, Alan reacts to a Rorschach test by finding innocent nature images, much to the annoyance of the psychiatrist. "Don't you realize that these things are supposed to be dirty?" she seethes.

No matter. Alan advises Barbara Ann on how to get out of pesky classes -- by using her charms on the lecherous principal, played perfectly by Harvey Korman -- or on how to convince her dad to buy her twelve cashmere sweaters so she can join an exclusive girls' club. (The sequence with Max Showalter as the dad is essentially a queasily incestuous riff on the old Jim Backus laughing record, "Delicious.") Alan helps Barbara Ann meet and marry the square-jawed Bob Bernard (Martin West), while running interference on Bob's cranky mother (Ruth Gordon, naturally). Alan drives Barbara Ann to a beach party, where she meets beach movie maestro T. Harrison Belmont (Martin Gabel). Belmont suggests Barbara Ann do a screen test, but Bob refuses to let his wife do something like that. So Alan plots to kill Bob.

The film plays almost everything -- especially the darker elements like the murder plot -- at a level of madcap absurdity that verges on live-action cartoons. The only exception is the relationship between Barbara Ann and her cocktail waitress mother Marie (Lola Albright). While there are some silly gags at the expense of Marie's alcoholism -- at one point, she drunkenly notes, "I never go out with a married man on the first date" -- Axelrod mostly grounds the character's sadness and plays it for drama. Marie drinks to mourn her wasted potential, and Barbara Ann is partly motivated to become someone special so that she can avoid Marie's fate. It takes real chutzpah to ask the audience to take a break from nonstop insanity and actually care about a few of its characters, but the choice manages not to derail the flick. In fact, it transforms Lord Love a Duck from an amusingly bizarre intellectual exercise into something more human and bittersweet. 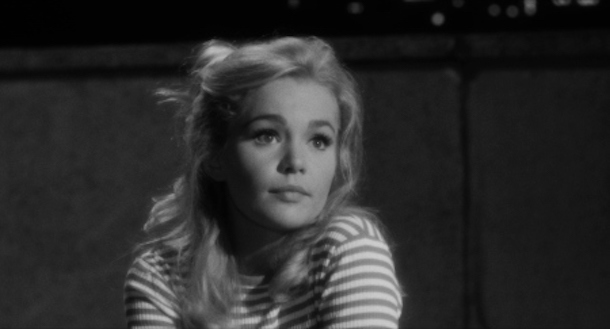 The Video:
Touted as being sourced from a new 2K master, the AVC-encoded 1080p 1.85:1 presentation has a great overall appearance. Excellent detail and depth, deep blacks and well-delineated contrast. A significant improvement over the MGM DVD.

The Audio:
The DTS-HD MA 2.0 mono mix offers good support for the dialogue and for Neal Hefti's music (including the oft-reprised theme song). No complaints. An English subtitles option is available -- and it's an above-average transcription to boot.

- for this film, plus Evil Under the Sun, Heartbreak Hotel, What Ever Happened to Aunt Alice?, and The Art of Love.

Final Thoughts:
Lord love an odd duck. There are some movies in the same tonal neighborhood as Lord Love a Duck -- The Loved One and Better Off Dead come to mind -- but nothing else quite captures the same mix of rawness, wryness, and strangeness. It's pretty special. The spiffy new video transfer is pure gravy. Highly Recommended. 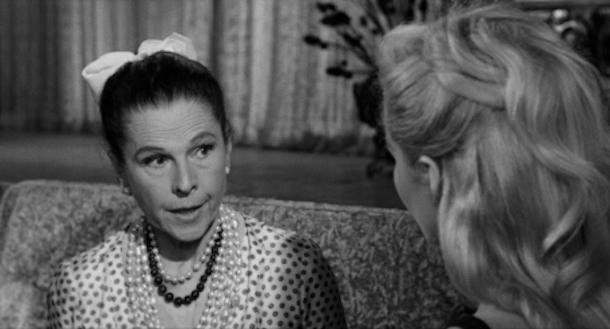