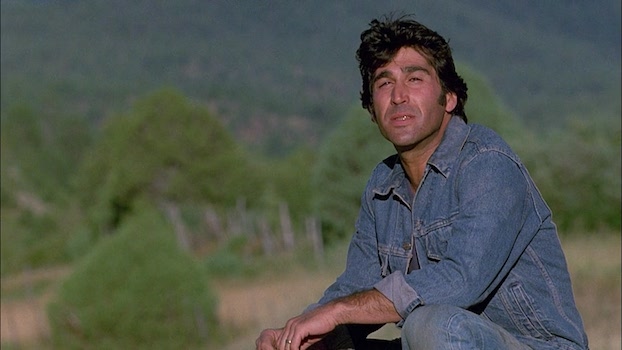 NOTE: The images accompanying this review are promo stills that do not necessarily reflect the quality of the Blu-ray under review.

The Milagro Beanfield War was pretty indifferently received upon release in 1988. It was Robert Redford's much-belated second directorial effort after his multi-Oscar-winning debut, Ordinary People. It was also worlds away in subject matter and tone from that first film. It features an ensemble cast of mostly Latino actors, with some notable Anglo ringers to presumably make the marketing easier (although it didn't help).

The film is set in the fictional town of Milagro, New Mexico, a relatively poor but tightknit community which is threatened by an encroaching real estate development that would force them to move away. The town's comings and goings are witnessed by an old-timer, Amarante (Carlos Riquelme), who bickers with a sombrero-wearing angel (Robert Carricart) that only he can see. Sonia Braga plays Ruby Archuleta, the local mechanic who wants to organize the town to rise up against bigwig developer Ladd Devine (Richard Bradford). John Heard appears as Charlie Bloom, a burnt-out '60s-radical lawyer living in Milagro. Ruby wants Charlie to help lead a resistance, but he is tired of lost causes. Musician-actors Freddy Fender and Rubén Blades are the town mayor and sheriff, respectively, who just want their quiet little town to stay quiet.

That precarious balance is endangered when José "Joe" Mondragón (Chick Vennera) angrily kicks a valve "protecting" the big developer's water and it begins to irrigate his late father's neglected beanfield. Rather than fix the broken valve, he decides to start planting. He becomes a subject of fascination for the town, and a thorn in the side of Devine. Devine asks for support from the governor (M. Emmet Walsh) to stop Joe. He sends for maverick police detective Kyril Montana (Christopher Walken). Although Montana is supposed to be undercover, within seconds of driving into town the locals ID him as a cop.

While the film has some serious underpinnings about how American big business finds ways to displace poor and brown people in the name of greed, the tone skews toward magical realism and humor rather than the wrenching melodrama of Ordinary People. Reading contemporaneous reviews of The Milagro Beanfield War, many critics grumble that the film can't decide whether it wants to be a realistic drama or a charming fable. That was not a problem for this viewer. David Ward (The Sting) and John Nichols's screenplay adaptation of Nichols's novel deftly juggles its many characters without losing track of the central conflict, while Redford's direction (complimented by Robbie Greenberg's sun-drenched cinematography) blends the tones elegantly.

Many of these same reviews paint the film as white liberal hokum, and the jury might still be out on that. I personally didn't detect condescension toward any of the characters, but I'm also not Latino. Maybe the well-meaning white characters -- which also include Daniel Stern as an NYU sociology student who befriends old Amarante -- don't need to be in the story, but they also don't pull focus from the central characters. They are just part of the ecosystem of the town.

The only note that felt oddly forced to me came near the end. **POSSIBLE SPOILER ALERT** Walken's character Montana has been ruthlessly plotting against Joe the entire film and eventually leads a manhunt to capture him. When Walsh's governor tells him to call it off and let Joe go, Montana just seems to switch off and become a normal guy. He even jokes around with Joe, and the townspeople laugh about it. Walken's charisma sells the moment, but it feels totally Hollywood-fraudulent in its suggestion that these folks would suddenly pal around with this guy who did nothing but use his badge to work against them. **END SPOILER**

In the end, the craftsmanship and the excellent performances make The Milagro Beanfield War a feel-good treat. I continue to resist the assertion that this flick is hokum but, on the other hand, well-intentioned, well-made hokum has its value too.

The Video:
As with Kino's recent disc of The Hard Way, this AVC-encoded 1.85:1 presentation is given plenty of room to stretch out across a BD-50 disc, but unfortunately the old master provided by Universal has problems. There is evidence of edge enhancement and the contrast is oddly boosted. This obliterates shadow detail in night-time and dark scenes, sometimes making them hard to make out. Day scenes look relatively better, with suitably saturated colors, but the overall look comes off slightly inorganic and manipulated.

The Audio:
No complaints with the DTS-HD MA 2.0 stereo mix. Dialogue is clear and discernible, while Dave Grusin's Oscar-winning score is well-supported without overpowering the mix. An optional English subtitles track is provided that actually bothers to transcribe most of the Spanish dialogue exchanged between characters too, rather the typical "[speaking Spanish]" or "[speaking foreign language]" cop-out.

- Kremer talks with Vennera over Zoom as they watch the film.

Final Thoughts:
I really enjoyed this movie. The cast is uniformly well-suited to their roles, and the film's gentle use of magical realism gives this David-and-Goliath story its own atypical personality. However, the old HD master used for this release is really quite disappointing. While I eagerly recommend this film to newcomers, the disc is far from definitive. Rent It. 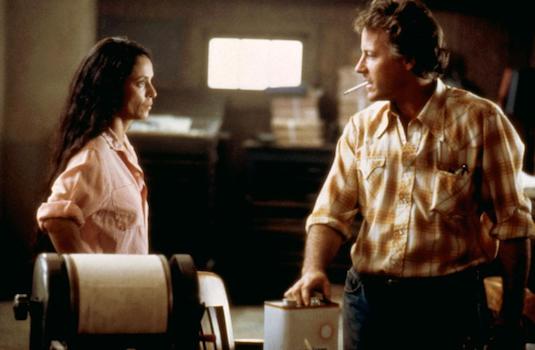