Kino // Unrated // November 17, 2020
List Price: $29.95 [Buy now and save at Amazon]
Review by Stuart Galbraith IV | posted November 23, 2020 | E-mail the Author
Reportedly the first original feature film adapted from a television series, Dragnet (1954) is an excellent police procedural/crime film, far better in fact than its reputation. Originally a radio series debuting in 1949, the first TV show first ran from 1951 to 1959, and following a 1966 TV-movie/pilot film, Dragnet was revived from 1967-70. That last Dragnet, unfortunately, is the one everyone remembers, for creator-star Jack Webb's famously stiff if rat-a-tat acting style, and its striking, even ludicrous contrast to the TV-imagined world of ‘60s counter-culture.

While the revived series still airs in syndication and is available on DVD, the infinitely superior original show from the fifties has inexplicably remained in home video limbo. Poor copies of episodes that have fallen into the public domain have been released, but these only hint at the original Dragnet's innovative and enormously influential style.

And, boy, was it popular. It was a Top Ten show for most of its run, peaking in its third season, when Dragnet was second only to I Love Lucy and commanded an incredible 53.2 rating, a figure unimaginable today. Watching Dragnet the movie, one can easily see how, without it, there might never have been later huge franchises like Law & Order, CSI, Hawaii Five-O, NCIS and more. Indeed, the gritty film of Dragnet plays an awful lot like a 2020 episode of Law & Order: Special Victims Unit, from the violent crime opening to detectives arguing with the Deputy District Attorney about the evidence needed to indict a suspect, the long interrogation scenes, detectives dispatched to find reluctant witnesses, etc. All the tropes were already there, perfected even, on Dragnet nearly 70 years ago.

Those who remember Jack Webb (1920-1982) today mainly (and wrongly) think of him as an emphatically un-hip square, a conservative TV cop lecturing overaged teenagers on the slippery slope dangers of smoking weed. In fact, Webb throughout the 1950s was something like a TV version of Orson Welles. The early Dragnet on radio and TV broke all the rules and created new ones. Both in aesthetic terms and how it was produced, Dragnet even seen now frequently surprises. Michael J. Hayde's revelatory biography My Name's Friday: The Unauthorized but True Story of Dragnet and the Films of Jack Webb explores all this in exhaustive detail and is highly recommended.

The success of TV's Dragnet resulted in a multi-picture deal with Warner Bros., beginning with the movie version of the TV show. Produced on a modest budget of just $500,000, it was a big hit, and eventually led to Pete Kelly's Blues (1955), The D.I. (1957), and -30- (1959), all starring, and produced and directed by Webb. Though increasingly less successful at the box-office, like the radio and TV Dragnet they all have innovative components and are interesting and unusual. 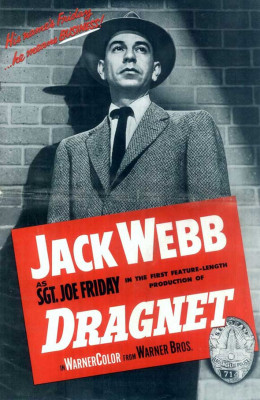 The movie opens impressively. In a prologue with no dialogue, Miller Starkie (Dub Taylor) and Max Troy (Stacy Harris) are walking through an empty lot somewhere in Los Angeles when a man, Chester Davitt (Willard Sage) appears from the opposite end of the lot, brandishing a sawed-off shotgun. Starkie tries to run, but Troy shoves him into Davitt's sights. The gun is fired, and Starkie turns to face the camera in a tight close-up. He's covered with splattered blood. Though Starkie is clearly dead, Davitt reloads both barrels and fires again. (How this passed the Production Code is anyone's guess.) Later in the film, Police Capt. Hamilton (Richard Boone) remarks, "Starkey was hit four times, the first two cut him in half."

Friday grimly adds, "The second two turned him into a crowd."

Dragnet is a "howcatchem," with Webb obsessively interested in meticulously and accurately recreating actual LAPD procedures and policies. They identify the victim, a bookie, and eventually peg high-level gangster Max Troy as one of the two ambushers. But gathering enough evidence first to hold and then later indict him to the satisfaction of Deputy D.A. Alexander (Vic Perrin) proves difficult. Webb clearly loves real-life details like the Minifon Mi-51 recording device an undercover female cop (Ann Robinson) uses, or Webb's monologue directed at Troy detailing the tax deductions of his $464/month cop's salary. (Webb did this several times on Dragnet, I believe.) Even the story's resolution is clever and unusual.

The process, rather than the plot, is what drives Dragnet, unusual for a Hollywood movie of any sort. As with the radio and TV series, Webb stocks the movie with actors culled from those programs, especially members of his stock company of actors, much like Welles. Virginia Gregg, for instance, was to Webb what Agnes Moorehead was to Welles, Gregg here playing the alcoholic, one-legged widow of the murdered man, in a remarkable vignette of acting. Vic Perrin, Stacy Harris, Olan Soule (and a crime scene specialist), Art Gilmore (as a doctor), James Griffith (as a reluctant witness) and others had all appeared on Dragnet, some frequently. (Only Peggy Webber, herself a protegee of Welles, is absent.)

Others in the cast, like William Boyett (Highway Patrol) and stuntman Dick Crockett (Mike Hammer), became regulars on other cop/detective shows. Webb's fondness for offbeat casting and his love of traditional jazz turns up as well, with jazz trumpeter Dick Cathcart, who later dubbed Webb's playing in Pete Kelly's Blues, turning up in one big scene, as well as, of all people, famed art director Harper Goff (20,000 Leagues Under the Sea, Willy Wonka and the Chocolate Factory) as a bridge club manager. Webb probably knew Goff as a Dixieland jazz banjo player.

Though originally released by Warner Bros., Webb later moved his production company to Universal in the 1960s, and apparently when the rights to the movie Dragnet reverted to his company, he sold them to Universal along with the rest of the franchise. This might help explain why the film elements are less than pristine. Shot for 1.75:1 widescreen, straight cuts tend to look fairly good, but opticals such as dissolves and fades tend to be severely dupey. Kino's 2K restoration offers the film in that widescreen format but also in 1.37:1 full-frame, I guess for those he can't think of Dragnet as anything other than a TV show, for clearly the widescreen framing is correct: in the standard version, there's far too much headroom above the actors' heads. The DTS-HD Master Audio (mono) is fine, and optional English subtitles are offered on this Region "A" disc.

Supplements include an audio commentary by Toby Roan and a theatrical trailer.

The movie Dragnet is a cracklin' good crime film, a real surprise for those only familiar with Webb's later ‘60s version. Highly Recommended.