Kino // Unrated // November 17, 2020
List Price: $29.95 [Buy now and save at Amazon]
Review by Stuart Galbraith IV | posted November 24, 2020 | E-mail the Author
Ulysses (Ulisse, 1954), adapted from Homer's Odyssey, was quite the unusual production for its time. A collaboration of Italian, French, and U.S. companies was rare in 1954. It was largely produced and directed by Italians, but featured two Hollywood stars, Kirk Douglas and, to a much lesser extent, Anthony Quinn. In Italy, however, Silvana Mangano, the wife of co-producer Dino de Laurentiis, received top billing. Further, it was shot in 3-D, though apparently never exhibited in that process, and it's possible the complete left/right 3-D negatives no longer survive. Acclaimed cinematographer Eugen Schüfftan, whose diverse credits include the photography of Eyes without a Face and The Hustler, but who also did special effects for Fritz Lang's Metropolis, is likewise credited here with the visual effects, though in recent years much more attention has been paid to the contributions of the film's camera operator, future cult director Mario Bava.

Kino's new Blu-ray, licensed from StudioCanal, offers both the Italian and English versions of the film. Their running times vary by just a few minutes, but put the viewer in the unenviable position of having to choose between the original Italian and the rather tinny English audio, but where Douglas's and Quinn's own voices are heard. Though not in 3-D, the color film is gorgeous on Blu-ray. 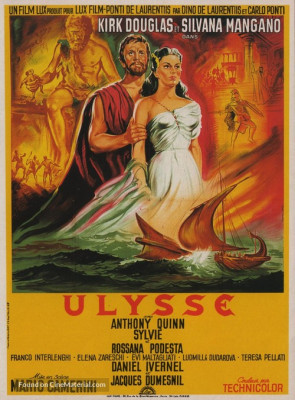 At the palace in Ithaca, Queen Penelope (Mangano), the wife of Ulysses (Douglas), is beleaguered by suitors anxious to marry her after her husband, the king, fails to return home following the sacking of Troy. (In flashbacks we see Ulysses enter the city via the Trojan Horse, and offending Neptune by destroying his temple.) She has agreed to settle on a suitor upon completion of an elaborate tapestry, which she secretly unweaves each night to buy her and Ulysses more time. Their son, Telemachus (Franco Interlenghi; just one year younger than 24-year-old Mangano), has grown tired of waiting, and sets out looking for his missing father.

Ulysses, meanwhile, has washed up on the shores of Phaeacia, suffering from amnesia. Discovered by the Princess Nausicaa (Rossana Podestà), Ulysses is nevertheless welcomed by King Alcinous (Jacques Dumesnil), especially after it becomes clear his daughter is anxious to wed the handsome stranger. However, on the day they are to be married, Ulysses gazes at the sea and begins to recall what brought him there.

In flashbacks the audience learns that after the fall of Troy, Ulysses and his men go ashore on an island in search of basic supplies, only to find themselves trapped in the cave of giant Cyclops Polyphemus (Umberto Silvestri). After barely escaping that threat, Ulysses and his crew pass the rock of the sirens, and later still Ulysses falls under the spell of the sorceress Circe (also Mangano).

Somewhat like Douglas's later The Vikings (1958), Ulysses isn't exactly high art, but as an adventure with loads of action and intrigue it delivers the goods. The picture was not only a major influence on Italy's peplum boom soon after but also, clearly, on fantasy films far and wide, as far-flung as Japan. I don't recall stop-motion animator Ray Harryhausen ever discussing Ulysses, but it so closely resembles his Sinbad movies and Jason and the Argonauts (1963) in myriad ways it just had to have influenced him also. In the end, Ulysses plays like an exceptionally good peplum of the 1958-65 era, during which as many as several hundred were produced, but of which less than a dozen could actually be considered good.

At least six writers, including Ben Hecht and Irwin Shaw, worked on the script, though its title character remains enigmatic and inconsistent: at times a strong and resourceful leader, at others irresponsible and even foolish, though Douglas's screen charisma compensates some. He has a six-month and obvious sexual relationship with Circe, yet returns home to Penelope like she's always been the only woman in his life. Silvana Mangano was not a great actress but the movie makes clear she was a truly extraordinary beauty, and this, too, goes a long way to keep Ulysses a constant feast for the eyes. Beginning the year before this was made, Hollywood actor Anthony Quinn began appearing in European films as well as Hollywood-made ones, particularly in Italy. He starred in Fellini's La Strada the same year as this, along with two other Italian films also in 1954. In Ulysses, Quinn's role is minor, as Antinous, the most rebellious among the suitors. His part couldn't have taken more than a few days to shoot.

Harold Rosson (The Wizard of Oz, Singin' in the Rain) was the cinematographer, and the film is gorgeously photographed from beginning to end. Some scenes uncannily resemble Mario Bava's later color films as director, and reportedly he co-directed the Cyclops sequence, notable for its excellent special effects and make-up design (though Schüfftan was pretty clearly responsible for those), and undoubtedly supervised the lighting and camerawork for the Circe sequences, which look more like something straight out of Bava's Hercules in the Haunted World than anything in Rosson's filmography.

Ulysses is presented in 1.37:1 standard frame, though Tim Lucas's Mario Bava book All the Colors of the Dark and other sources claim 1.66:1 widescreen. Given that the film began shooting in May 1953, the standard ratio is not inconceivable, as Hollywood movies were only themselves just beginning to be shot for widescreen cropping, and CinemaScope hadn't yet appeared. It's also possible it was shown in 1.37:1 in Italy and 1.66:1 widescreen during its release by Paramount in the U.S., which came later. Regardless, it was also, apparently, one of the very last films shot in 3-strip Technicolor and, if that's true, StudioCanal's 4K restoration may have sourced original black-and-white separations as the image has strikingly rich color with no misaligned matrixes. It's definitely a thing of beauty.

The two version of the film both include the original Italian titles, which include a text prologue and epilogue that goes untranslated, though it appears also in the U.S. opening and closing titles included as an extra feature. The English version has the real voices of Douglas and Quinn, along with familiar dubbing actors who'd voice innumerable sword & sandal and spaghetti Westerns for years to come. This audio is tinnier than the Italian track, which runs a couple of minutes longer. Optional English subtitles are provided on this region "A" encoded disc.

Supplements include an information-packed audio commentary by Tim Lucas on the Italian-language version; alternate U.S. opening and end titles; and trailers.

Not a great film per se, but enormously enjoyable and visually dazzling on Blu-ray and supported by excellent supplements. Highly Recommended.