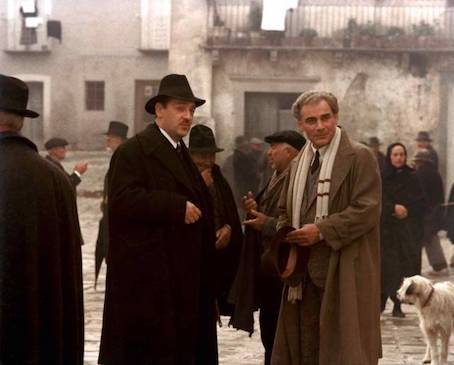 In 1935, Italian artist and writer Carlo Levi was sentenced to internal exile for anti-Fascist activism. He was forced to leave his middle-class life in the Northern city of Turin for the impoverished rural Southern area of Lucania. Levi recounted this time in his 1945 memoir Christ Stopped at Eboli, which was adapted to film in 1979 by Francesco Rosi (Salvatore Giuliano). While the film was released internationally in a 2 1/2-hour cut, Criterion's new Blu-ray restores the original miniseries length of four hour-long episodes.

It's easy to see how one could be tempted to shorten Rosi's miniseries, as the full-length version is unrushed and seems as interested in exploring the setting, the landscapes, and the atmosphere of the tight-knit village of Gagliano (a thinly veiled fictionalizing of Aliano) as it is with following Carlo Levi (Gian Maria Volonté) as he adjusts to his unusual captivity. In stark contrast to modern serialized storytelling, the episodes of Christ Stopped at Eboli offer no dramatic cliffhangers and rarely even feel like they reach a "button;" instead, they end in the middle of quiet, offhand moments indicative of the whole work's neorealism-influenced, observational style.

But paring this film down to its plot also seems like it would work against what makes the miniseries so effective and unique. The languorous pace forces us to become acclimated to Gagliano, just as Carlo must. In some ways, his punishment doesn't seem that bad. He is able to walk around town and be a part of the community -- although he is tailed by a carabinieri to make sure he does not go too far outside the allowed boundaries. Carlo finds a stray dog that he is allowed to keep for companionship. Eventually, he finds a nice old house to live in, where he can paint and write.

Gagliano is typical of small towns, in that everybody knows everything about everybody else. Carlo learns about the other political prisoners in town, although they are not allowed to meet or communicate. He learns of the local priest, who is the local laughingstock. Paolo Bonacelli plays the town mayor, a devoted Fascist who nonetheless seems to delight in having a "gentleman" like Carlo around. The mayor is oddly likable throughout, largely thanks to Bonacelli's performance, even when he tries to steer Carlo away from ideologically "dangerous" literature like Montaigne or when he refuses to send a letter to Carlo's sister that is politically dicey.

The title Christ Stopped at Eboli refers to the fact that Christianity didn't really travel South from the major crossroads of Eboli to the peasant population, but it also suggests that Christian kindness hasn't been extended to them either. The news quickly gets around that Carlo studied medicine -- although he never practiced -- and soon he is flooded with patients. At first he resists, but he realizes he is needed; the other doctors refuse to help the people too poor to pay them. This establishes Carlo's place in the community and gives him a special privileged view into peasant life.

While the film has political convictions, it focuses less on injustice than on humanity and the day-to-day. Volonté's performance helps set the tone, but the film overflows with warmth and compassion for its characters -- maybe even those who don't deserve it.

Irene Papas (Zorba the Greek, Iphigenia) arrives roughly halfway through the miniseries as Carlo's cleaning woman -- the only one allowed by local custom to clean for a single man, because her reputation has already been too sullied for it to cause a stir in the community. Her character helps to illustrate the superstitions and odd customs of the locals. For instance, in one scene, she refuses to throw out the collected garbage because it has gotten too late in the day and she might injure or scare away the angels who come around sundown to protect houses from harm. Carlo mostly reacts to these idiosyncratic beliefs with interest and amusement, although he does finally lash out in anger when she refuses to pose for a portrait because she is afraid for her soul.

Christ Stopped at Eboli ends with Carlo returning to his intellectual friends in Turin. He sees them with new eyes, realizing they want to overthrow the Fascist government without any ideas of how to actually make life better for the peasants he met in the South. There's a little bit of "here's what I learned" patness to the sequence, but it provides an effective synthesis of the many experiences we've shared throughout the film. Carlo's take on the "Southern question" -- a debate with inevitable echoes of the current American political discourse -- is that the middle class and elites want to correct the government for their own sake, while they are essentially ignorant of the poor and the poor are disdainful and essentially ignorant of them.

The film doesn't provide an authoritative answer, but it does illustrate that, at this point, it's worth rephrasing the question. 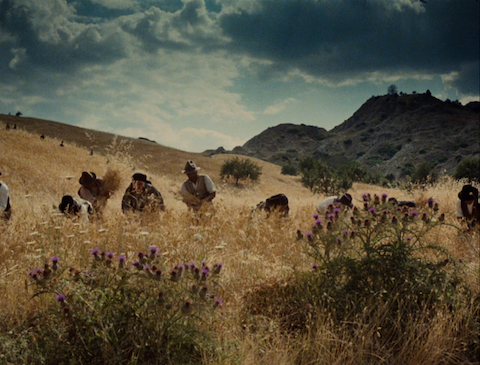 The Blu-ray
Christ Stopped at Eboli is packaged with an insert featuring an essay by Alexander Stille and a 1979 director's statement from Francesco Rosi.

The Video:
Sourced from a 2K restoration, this AVC-encoded 1080p 1.33:1 presentation is mostly quite pleasing. Presumably shot with 16mm film, there's not as much detail in the sumptuous wide shots as one might hope, but that is not the fault of the transfer. In closer quarters and tighter shots, detail and clarity is more satisfying. Colors are satisfying, with the interior scenes looking a little drab and blue-grey thanks to the stone walls of many of the locations. A few minor density issues in the bookending frame story, but not a major distraction overall.

The Audio:
The Italian LPCM mono audio (with optional English subtitles) is well-preserved, but isn't particularly memorable. Mostly, it just gets the job done. Piero Picconi's score goes a bit broad and sentimental at times, but it supports the film well for the most part.

(HD, 27:28) - Moore translated the subtitles for this disc, but he is more than just a linguist. He worked with Francesco Rosi as an interpreter and has an excellent cultural understanding of the world portrayed in Christ Stopped at Eboli. This interview is an excellent, excellent companion to the film.


Final Thoughts:
Christ Stopped at Eboli is a warm and ingratiating character study that eases viewers along an emotional journey. Some viewers may have trouble slowing down to the film's rhythm, but it offers much to appreciate and mull over during its four hour-long episodes. One could boil it down to the catchphrase, "the personal is political," but why boil it down? Highly Recommended. 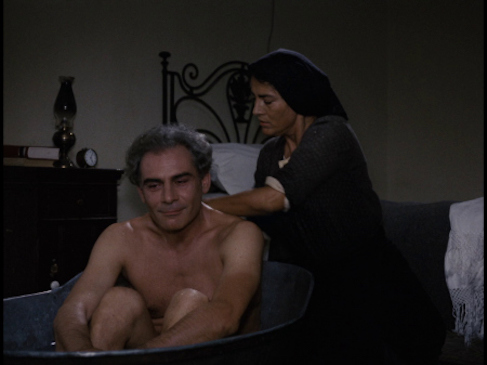