Wonders of Aladdin, The

New England-based movie distributor-turned-producer Joseph E. Levine's big breakthrough was Hercules (1958), the Italian-made sword-and-sandal film Levine acquired for his company, Embassy Pictures. On a modest investment preparing the American version and for advertising and prints, the film became a huge hit, Levine pocketing $4.7 million in rentals, an enormous profit for a dubbed-into-English import. The sequel, Hercules Unchained (1959), did nearly as well.

In response, Levine put together a package of three movies: Morgan, the Pirate and The Thief of Baghdad, both starring Hercules star Steve Reeves, along with The Wonders of Aladdin (1961), headlined by comic actor-dancer Donald O'Connor, Levine selling the package to MGM.

The Wonders of Aladdin, clearly, was intended as a lighthearted family-friendly fantasy-adventure but its disparate elements don't really gel. Recently I tried experimenting with a pasta dish, combing ingredients all if which I liked but combined the end result was not at all appetizing. That pretty much describes The Wonders of Aladdin as well. 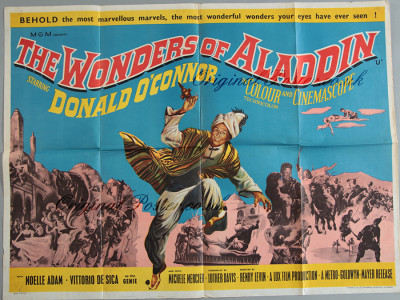 Aladdin's mother (Adriana Facchetti) buys her son a cheap oil lamp, unaware that it contains a genie. Scratching his back with the lamp, Aladdin (O'Connor) accidentally releases the genie (director Vittorio De Sica, a bizarre casting choice) who grants the young lad three wishes. The first wish briefly turns Aladdin into a giant to ward off angry merchants chasing him, one of whom (Milton Reid, Britain's answer to Tor Johnson, in an usually sizable role) becomes his devoted slave. He uses the second wish to join a caravan bound for the wedding of Princess Zaina (Michèle Mercier) to Prince Moluk (Terence Hill, billed here under his birth name, Mario Girotti), with Aladdin's long-suffering love interest, Djalma (Nöelle Adam), tagging along. However, the party is raided and captured by bandits, while elsewhere the Prince is part of another caravan captured by forces loyal to the Grand Vizier (Fausto Tozzi) who plots to marry the princess himself.

O'Connor had been in movies since his early teens, including playing Gary Cooper's character as a young man in Beau Geste (1939). In the early 1940s became a minor star at Universal, as a kind of second-string rival to MGM's Mickey Rooney, with Peggy Ryan as his Judy Garland. After the war, and as O'Connor aged, Universal cast him as the (human) lead of their "Francis the Talking Mule" series of low-brow comedies. Nevertheless, the "Francis" programmers proved enormously popular, O'Connor starring in the first six of seven movies made annually. (Ironically, Mickey Rooney, by this time in even worse career shape than O'Connor, starred in the last one.)

Outside projects helped. O'Connor famously supported Gene Kelly in Singin' in the Rain (1952); his "Make ‘Em Laugh" dance number being one of that classic film's highlights. He occasionally appeared in other big films, including There's No Business Like Show Business (1955) and was a familiar presence on ‘50s TV variety shows.

The Wonders of Aladdin finds O'Connor at the crossroads of his film career. Thirty-five at the time, he's as agile as ever and while he moves and reacts to things in amusing ways, he was not really a comedian per se, and without good material, he can only try to bring amusing bits of business to the film's busy, eventful but largely pointless action. Rather than playing a Harold Lloyd or Buster Keaton-type character playing Aladdin, the script offers something much more the kind of character Sabu played in numerous ‘40s films. The movie, meanwhile, is mired in the look of an ordinary sword-and-sandal picture. Busy but unmemorable, it just kind of plays out. Curiously, the climax, with Aladdin infiltrating the palace of the Sultan by pretending to be an elaborate full-scale mechanical dancing doll, a gift to the monarch, the sequence culminating with a battle with the bad guys, is precisely the climax the later Chitty Chitty Bang Bang (1968). One doubts that film's writers turned to The Wonders of Aladdin for inspiration.

Credited director Henry Levin (Journey to the Center of the Earth, The Wonderful World of the Brothers Grimm) can't rise above the mediocrity of the material. In recent years, Tim Lucas and others have focused on Mario Bava's contributions to the film; in some markets Bava was even billed as co-director, peculiarly so: "A Film by Henry Levin…Directed by Mario Bava." However, in the U.S. version, Bava isn't credited in any capacity.

Lucas surmises that Bava essentially directed the second unit, was in charge of the special effects, and supervised its postproduction, at least outside the U.S., and responsible for about 20% of the film. For the most part, the movie is competent but hardly distinguished. Bava's hand can be seen in the big nighttime chase near the beginning of the film, and later the laboratory of the Grand Vizier's wizard (Raymond Bussières) is lit but not designed like a Bava film. Most of the picture is not good, however, with particularly lousy special effects, especially all the optical work. When Aladdin triumphantly flies about atop a magic carpet, the impact and believability isn't one-tenth of even the 1924 silent film with Douglas Fairbanks.

Filmed in 2.35:1 CinemaScope, the first two reels (20 minutes) of The Wonders of Aladdin look decidedly mediocre, perhaps from a dupe negative, and resemble the blurry and blotchy look one associates with sword-and-sandal films when shown on television. At the 20-minute mark, however, the movie pops into impressive clarity with excellent color, and stays that way for the rest of the film. (Kino is touting a new 4K master.) Though mostly ordinary looking, a few scattered shots, like the Prince fleeing from soldiers at dawn against a brilliant blue sky, are impressive on this Blu-ray. This version of the film runs 93 minutes, shorter than a reported 99-minute Italian version (which even Lucas hasn't located), though apparently also longer than most U.S. prints. The English DTS-HD (mono) audio is adequate. Optional English subtitles are provided on this Region "A" encoded disc.

Supplements include an audio commentary by Tim Lucas, as usual packed with information and insight, much like the long chapter on the film in his hefty Bava book, All the Colors of the Dark.

Very small children might get a kick out of The Wonders of Aladdin, but I found it wanting. Star Donald O'Connor tries hard but the disparate components just don't come together. Still, for its unusualness and Lucas's commentary track, it's Recommended.