Face at the Window, The

Kino // Unrated // October 6, 2020
List Price: $24.95 [Buy now and save at Amazon]
Review by Stuart Galbraith IV | posted December 1, 2020 | E-mail the Author
I confess that, until now, I'd never seen any of the ‘30s British thrillers starring cult actor Tod Slaughter. Watching the peculiar The Face at the Window (1939) I began wondering, "Is this a representative title? Are the others all like this?" Based on various scholarship about Slaughter and listening to the Blu-ray's well-researched audio commentary track, the answer, apparently, is yes, pretty much.

Though far more permissive on matters of sex, British censors have long held an aversion to flat-out horror. During the 1980s the "video nasty," graphic horror films on video cassette but without British Board of Film Classification seals caused quite a stir. Before that, everyone from director Michael Powell to the folks at Hammer Films sparred over every spilled drop of cinematic blood. During the second-half of the 1930s, horror films from Hollywood were all but banned, and this, in part, may explain the unusual nature of Tod Slaughter's domestically produced, decidedly oddball horror films.

As with Slaughter's other starring films in this vein, The Face at the Window is primarily a florid Victorian melodrama, though with horror and even science fiction elements. This one was adapted from an 1897 play of the same name by F. Brooke Warren and follows its basic plot. The movie opens with a revealing text prologue encouraging those in the audience to enjoy being frightened -- or to laugh at its antiquated plot and characters. In other words, while it has horror movie components, by dressing it up as something like camp, the producers were cleverly subverting restrictions that would have been imposed upon if not completely precluded a "straight" horror film. 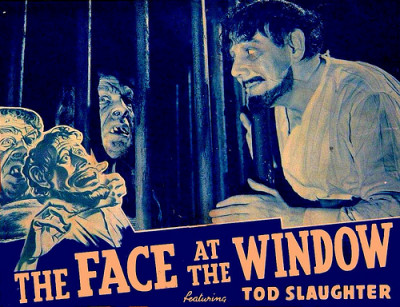 Paris of 1880 is besieged with a series of "Wolf Man" murders, the killer always heard howling like a wolf and peering into a window moments before striking. (However, all those seeing the face at the window wind up dead, so how would anyone living know that?) In any case, the latest killing also involves a bank robbery, the loss of capital threatening the fortunes of bank president M. de Brisson (Aubrey Mallalieu) and the liberty of Lucien Cortier (John Warwick), a bank clerk wrongly suspected of the crime. Lucien and de Brisson's daughter, Cecile (Marjorie Taylor), are in love, but the wealthy Chevalier Lucio del Gardo (Slaughter) lusts after Cecile and wants her for himself, offering to secure the bank's finances in exchange for Cecile's hand. The bank president is reluctant, but agrees to allow Chevalier and Cecile to meet, and let her decide the matter. She refuses his hand in marriage.

Chevalier then sets about framing Lucien of the crime, later taking even more drastic measures, working with confederates at a seedy bar/brothel/sex trafficking ring managed by La Pinan (Margaret Yarde). Meanwhile, Lucien pins all hopes of clearing his name on Professor LeBlanc, a scientist who believes electrical impulses on recently murdered victims can reveal clues about their final moments.

The movie's horror elements are fleeting, limited to a couple of repetitive Wolf Man murders where the monster's face is in each case flashed onscreen for maybe 18 frames (less than one second), so viewers will want to freeze-frame those brief shots to study the makeup design; and a bit more during the effective if over-the-top climax. Likewise, the science fiction element, scientist LeBlanc's experiments with electricity on the dead, is mostly off to the sidelines, and attempts to recreate the kind of electrical shows Kenneth Strickfaden brought to Universal's horror films and serials are rather pitiful.

Nevertheless, The Face at the Window does not at all resemble the threadbare horrors of Monogram and PRC that were soon to follow along Hollywood's Poverty Row. Though in the realm of the "quota quickie," cheap-and-fast British films designed to meet quotas stemming from the Cinematograph Films Act of 1927 (to slow the decline of the British film industry), the film has reasonably good production values, more in line with the B-pictures of Universal or Fox at that time.

What distinguishes The Face at the Window from other horror films is its dialogue, which has the flavor of 19th century stage melodrama, and especially Slaughter's Snidely Whiplash-like scenery-chewing, literally including villainous cackling. One would have assumed, wrongly, that Slaughter was a stage name, but the actor was born Norman Carter Slaughter, in 1885. His screen presence isn't much like that of predecessors such as Lon Chaney, Karloff or Lugosi. Rather, he comes across rather like an older Alan Mowbray, but with the coarser features of Victor Jory. His cinema-of-excess style anticipates the later performances (some of the time) of Vincent Price more than Karloff or Lugosi. Interestingly, Slaughter's is perfectly in synch with the material, while the rest of the cast appropriately plays it straight, no matter that the dialogue is stylized to the point of silliness.

And just as the film boasts better-than-you'd-expect production values, the actors aren't chopped liver, either. Most had respectful stage and movie careers. John Warwick, for instance had a long career in which he was soon typecast as police inspectors and the like, including in Horrors of the Black Museum (1959), a horror film that, in many respects, to this writer now seems a direct descendent of Tod Slaughter's oeuvre, with Michael Gough's way-over-the-top performance (in this and other Herman Cohen-produced films) perhaps deliberately inspired by Slaughter. The Face at the Window and other Slaughter titles were among the very first movies sold to American television (as early as 1942) so who knows?

Boasting a 4K restoration, the black-and-white, 1.37:1 standard screen The Face at the Window looks excellent, on par with Universal's classic monster movies from the 1930s on Blu-ray, with excellent detail and strong blacks, if a bit weaker on dissolves, fades, and other opticals. The English DTS-HD (mono) audio is perfectly fine also. Optional English subtitles are provided on this Region "A" encoded disc.

Supplements include a carefully considered audio commentary by critic and author Jean-Claude Michel that delves deep into this sub-genre and its roots, far beyond the film itself. Also included is an image gallery.

Not for all tastes, but fans of classic horror films will want to get this, especially given its splendid 4K remastering. Highly Recommended.