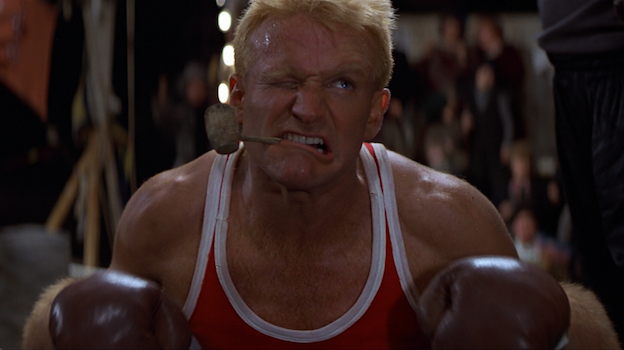 Robert Altman's musical comedy Popeye has had a strange dual reputation since its release in 1980. On the one hand, it is widely dismissed as an infamously misguided financial disaster that ended Altman's one-decade run as a major-studio Hollywood director. It also stalled Robin Williams's big-screen career for a few years. On the other hand, this flick lingers in the memory of certain former children as an agreeably offbeat take on a classic cartoon character that deepens (just a bit) when revisited as an adult. Further proof of this duality: Popeye is well-liked enough to receive a 40th Anniversary Blu-ray release from Paramount, but it clearly bears the brand of a film maudit since it took this darn long to arrive on the format.

Revisiting Popeye on Blu-ray does little to tip the balance further in one direction toward either masterpiece or misfire. The film is sometimes slyly funny and sometimes blatantly unfunny. It is ingeniously conceived in some moments and absolutely bungled in others. It is gleefully unhampered by traditional Hollywood plotting, but this episodic approach comes off as a bit aimless (especially in the film's second half). Harry Nilsson's sketchy song score thumbs its nose at the overblown style of Broadway show music but... well... sometimes it feels a bit thin.

That's not to suggest that the film is lacking for pugilistic slapstick. Popeye gets pulled into a brawl at the aptly named Rough House diner, thanks to the taunts of some toughs headed up by a young(er) Dennis Franz. Popeye also jumps into the boxing ring to save Olive's brother Castor Oyl (Donovan Scott) from a pummeling at the hands of Oxblood Oxheart (Peter Bray), the self-proclaimed dirtiest fighter alive. A lot of the physical comedy in the film works, thanks in large part to Robin Williams's full-bodied commitment. (Theatrical clown Bill Irwin can also be spotted in the periphery of various scenes, doing throwaway physical gags.)

For better and worse, Popeye is a film of moments. While Feiffer has supplied a handful of story threads -- Popeye's search for his long-lost father, Bluto's jealousy over Olive and Popeye's burgeoning romance, Swee'Pea's sixth sense and the trouble it causes, the mysterious Commodore who runs Sweethaven -- none of them can really sustain a two-hour movie. Altman's fondness for digression works well in a rich tapestry like 1975's Nashville, but it's far more hit-and-miss in an intentionally comic-strip-flat creation like this. As Pauline Kael noted in her New Yorker review of the film: "Two-dimensionality is tiresome."

The Blu-ray
Popeye is packaged with a digital HD code.

The Video:
The AVC-encoded 1080p 2.35:1 presentation is excellent. No distracting dirt or damage. Colors are richly saturated. Strong clarity and depth. A high bitrate that takes advantage of the space on this BD-50 disc.


Final Thoughts:
Robert Altman's Popeye is one odd movie. Its unusual aspects are what make it memorable, lovable, and puzzling all at once. Paramount's Blu-ray features a strong A/V presentation and a sprinkling of interesting bonuses. It's modestly priced to boot. That combo of ingredients makes it easier to suggest a purchase for longtime fans or even just the boldly curious. Recommended.