Paramount // Unrated // October 6, 2020
List Price: $47.99 [Buy now and save at Amazon]
Review by Stuart Galbraith IV | posted December 4, 2020 | E-mail the Author
Star Trek: Picard (2020-present) at long last returns the Star Trek franchise to something resembling the characters and vision of the future intended by original creator Gene Roddenberry and others. The revival of Star Trek, having begun with The Motion Picture in 1979, picked up speed throughout the 1980s with new feature films starring the original series' cast, then, concurrently for a time, came Star Trek: The Next Generation (1987-94), Deep Space Nine (1993-99), and Voyager (1995-2001).

But then the carefully crafted Star Trek Universe began to unravel. Star Trek Nemesis (2002), the fourth and final feature film with the Next Generation cast, was poorly received, while Star Trek: Enterprise (2001-05) made disturbing storytelling shifts following the 9/11 terrorist attacks, and was cancelled four seasons into an intended seven-year run. Enfant terrible J.J. Abrams was brought in to revitalize the franchise with Star Trek (2009) a misbegotten rebooting of the series, with new actors reprising characters from the original 1966-69 series, a pointless exercise that, further, eschewed nearly every important facet of the Star Trek universe in favor of visceral CGI action set pieces more akin to Star Wars than Star Trek. That petered out after three increasingly dreary and derivative features.

Star Trek: Discovery (2017-present) marked the return of Star Trek to series television after a dozen-years absence, and while it's been, thankfully, more character-driven than the Abrams films, it similarly is a gluttony of CGI action set pieces, combined with unwieldy and convoluted story arcs founded on dark and/or mystical concepts. And like the Abrams films, is set in an alternate Star Trek Universe that, I for one, don't much like visiting.

When Patrick Stewart, popular star of The Next Generation, announced that he would be returning to his Jean-Luc Picard character in a new series, I approached this news with tremendous trepidation, expecting that while he'd probably be as delightful as before, that his character would be trapped in the same anti-humanist world of Discovery and the Abrams films. Happily, I was, for the most part, wrong. 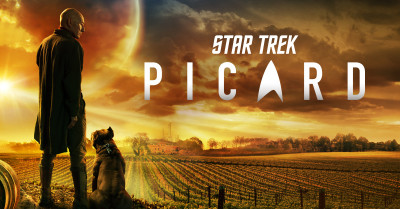 Long after the events of Nemesis, Jean-Luc Picard (Stewart) lives in quiet retirement at his family's centuries-old vineyards in France. His departure from Starfleet was not a happy experience: in both flashbacks (this series has lots) and a combative, present-day television interview, we learn that Picard resigned in protest after Starfleet abandoned Picard's ambitious efforts to lead the mass-evacuation of millions of Romulans prior to that system's star going supernova, after apparently malevolent androids (called "synthetics" or "synths") destroyed the rescue fleet being readied on the planet Mars. Comparatively few Romulans survived, and those that did were mostly relocated to desolate planets, like Native Americans relocated to inhospitable reservations in 19th century America. Further, the Federation bans all form of synthetic life in knee-jerk response to the attack.

Back in the present, Romulan assassins, members of a secret order called Zhat Vash, are determined to kill young female scientist Dahj (Isa Briones), she fleeing to Picard's vineyard without understand what instinctively is driving her there. It's quickly revealed that Dahj is herself an android, a "daughter" (via "fractal neurotic cloning") of Picard's friend and colleague, Data (Brent Spiner), who sacrificed himself at the end of Nemesis. The assassins, however, locate them and kill Dahj, but through synthetic specialist Dr. Agnes Jurati (Alison Pill), Picard learns that Dahj had a "twin" sister, Soji (also Briones), presently assigned to a decommissioned Borg Cube claimed by Romulan refugees.

The most refreshing thing about Picard is that, after years of instantly forgettable, allegedly high-adrenaline action, this series' writers allow characters to actually converse with one another, sometimes for several minutes of screentime. Further, these conversations don't always drive the narrative forward, but are often actually contemplative. They talk about death and the meaning of life, how their lives went wrong and, sometimes, how they're going to try and get their lives back on course. Some (presumably younger) critics have criticized Picard as being "slow," but even though it's the most leisurely-paced Star Trek in two decades, it's almost always engrossing, and never pokey. And, to its credit, it digs deeper better than The Next Generation did during most of its first two seasons. r

Widely known by now is that a number of characters from Next Generation and elsewhere make return appearances, including Brett Spiner as Data, Jonathan Frakes (who also directs an episode or two) as William Riker, Marina Sirtis as Deanna Troi, and Jeri Ryan as Seven of Nine (from Voyager). Impressively, none of these characters are tossed in like a Brady Bunch reunion show. The writing cleverly reintroduces each one acknowledging the passage of time and their advancing ages, and their conversations with Picard are meaningful as well as emotionally satisfying. Where in Abrams Star Wars movies he and the other writers painfully "toss a bone" to fans with awkward cameos and references, Picard uses these old friends in ways that are completely dramatically justified and even broaden their depth.

Picard has much to recommend it, but it does hedge its bets a little with an spfx-heavy, slam-bang climax (in its last two episodes) that the series doesn't really warrant, and several peripheral characters, mainly its two villains, are more Discovery-styled than something appropriate to the tone of Picard. Fortunately, by all accounts, they won't be back for Season 2. Still, Picard gets far more things right, hitting more than a few out of the park, and it's a relief to see anything Star Trek returning to its roots a little.

Filmed in 3.4K digital video for CinemaScope-style framing, Star Trek: Picard reportedly costs $8-9 million/episode and that money is up there on the screen. The 1080p transfers are up to contemporary standards, as is the DTS-HD 5.1 Master Audio. English subtitles are provided on this three-disc, region "A" encoded set.

Supplements are the usual sort of thing one expects on such a high-profile release, particularly Star Trek. Included are mostly superficial making-of featurettes, well over an hour's worth of material, broken up by subject matter into mostly 10-minute or so chunks. Also included are the usual deleted scenes and gag reel; a Star Trek Short Treks called "Children of Mars" running eight minutes; and a video commentary track.

Expecting something frustratingly mediocre but happily surprised by an imperfect but thoughtfully written series with only a few minor bumps easily corrected in future episodes, Star Trek: Picard is the first Star Trek anything I've enjoyed in decades. Highly Recommended.