VCA // Unrated // November 24, 2020 // Region 0
List Price: $24.95 [Buy now and save at Amazon]
Review by Stuart Galbraith IV | posted December 29, 2020 | E-mail the Author
I was surprised to read many disparaging reviews of the Western serial Riders of Death Valley (1941), viewers lambasting what they considered its interminable pacing, a B-Western story stretched across a 15-chapters running more than four hours. Well, I suppose that would be my reaction, too, were I to watch the whole shebang in a single sitting. Serials were never meant to be seen that way, but rather savored one-per-week over three-to-four months. All serials are shamelessly padded and repetitive, to be sure, but Riders of Death Valley is a cut above the usual chapter play for a number of reasons.

Produced by Universal, it was, reportedly, the first million-dollar serial. This is a dubious claim; even the priciest serials, such as the 1936 Flash Gordon, cost just $350,000, and that was considered quite lavish. Judging by what's onscreen, the actual cost was probably in the $400,000-$500,000 range, if even that. It has better production values, a bit more polish, and a much bigger cast of familiar (but not expensive) genre stars, but also features the usual stock footage one encounters in almost all serials, and cuts corners in other ways.

Still, the all-star cast alone is, for serial fans, pretty mind-blowing. Part of VCI's ongoing series of restored Universal chapter plays, Riders of Death Valley thankfully looks fine and without the major encoding failings too often associated with this label. 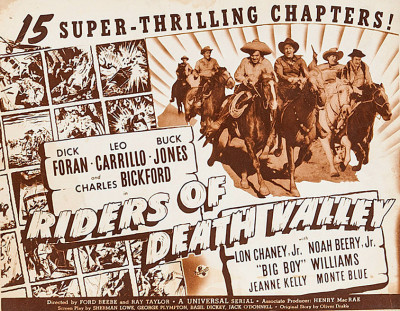 As established in the first chapter, their attentions turn to word of a lost Aztec gold mine discovered by Chuckawalla Charley (Frank Austin) who, dying, bequeaths his valuable map and claim to his niece, Mary Morgan (Jean Brooks), entrusting the map to Jim. Meanwhile, mysterious cowboy Tombstone (Buck Jones) joins the righteous Riders.

Kirby and Davis are mostly on the sidelines, using "dog heavy" Wolf Reade (Charles Bickford) and his "pack," including henchmen Butch (Lon Chaney, Jr.), Dirk (Roy Barcroft), and Pete (Richard Alexander) to do all the dirty work.

Crammed with genre stars like Foran, Jones, and Carrillo, character actors like Beery and Strange, and serial faces like Barcroft and Alexander (Prince Barin in the first two Flash Gordon serials), Riders of Death Valley is a lot of fun just watching them ply their trade. Sixth-billed Lon Chaney was on the cusp of Universal stardom, having already appeared in Man Made Monster the year before with The Wolf Man in release before the year was out. Despite the lowly billing, even he seems to be enjoying himself.

The serial's secret weapon is actor Charles Bickford as the main villain, Wolf Reade. Bickford was a major Broadway star of the late-1920s and soon after a leading player in films, but an acrimonious relationship with MGM Louis B. Mayer, Bickford's middle-age, and an injury on the set of East of Java (1935), in which he was mauled by a lion, led him to lesser fare such as this. Bickford would soon turn his career around when contracted for character parts at 20th Century-Fox, earning three Supporting Role Oscar nominations during the ‘40s, and in major films and prestigious television roles thereafter. Just as the Hopalong Cassidy series benefitted from above average actors as villains (Victory Jory and Lee J. Cobb come to mind), Bickford grounds the often-juvenile plotting with gravitas, the actor to his credit taking the role as seriously as an A-list feature.

The exteriors were mainly filmed in Red Rock Canyon, a popular and picturesque movie location just off the Antelope Valley Freeway in Kern County, California, about two hours from Los Angeles. Its distinctive hoodoos are instantly recognizable in myriad other films, including The Big Country, Beneath the Planet of the Apes, Universal's Buck Rogers serial, and even Jurassic Park.

VCI's new Blu-ray offers a new 4K scan of 35mm fine grain elements. The black-and-white, 1.37:1 standard frame image improves upon the label's earlier serial releases though the mostly bright exteriors of the show may be a factor in this. The first reel of Chapter 6 apparently does not survive in 35mm, so a 16mm source was used. The LPCM 2.0 mono audio is better than average, and optional English subtitles are included on this region-free disc.

Supplements include an audio commentary by Toby Roan on Chapters 1 & 2, an animated photo gallery, and a trailer.

A very entertaining, (genre) star-packed serial, Riders of Death Valley is enormous fun when viewed a chapter at a time (at least several days apart, I'd say) and for fans of this type of film, it's Highly Recommended.