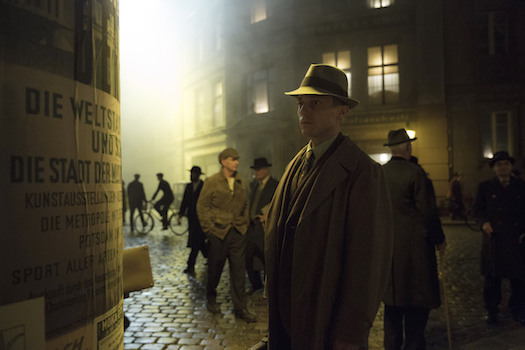 Based on a series of crime novels by Volker Kutscher, Babylon Berlin is a big-budget German-produced noir-style series set in the waning days of the Weimar Republic. Slick and satisfying, the show is a collaboration between writer-directors Tom Tykwer (Run Lola Run), Achim von Borres (Alone in Berlin), and Henk Handloegten (Good Bye Lenin). The first two seasons of the show adapt the first novel in Kutscher's series* and, in 2018, the 16 episodes of these seasons appeared on Netflix in the U.S. all at once. Now Kino has packaged these two seasons in a 4-disc Blu-ray set.

Volker Bruch, previously seen playing an ambivalent soldier in the WW2 miniseries Generation War, here plays an ambivalent police detective Gereon Rath. Gereon is a veteran of the first World War, and it has left him with an addiction to morphine to stave off his PTSD shakes. At the beginning of the show, Gereon has been transferred from his hometown of Cologne to the vice squad in Berlin. His politician father has given him the specific task of tracking down some sex films that are being used for blackmail. Gereon doesn't tell his new partner Bruno Wolter (Peter Kurth) about his mission, but Wolter is suspicious enough of Gereon that his purpose is discovered soon enough anyway.

At the precinct, Gereon crosses paths with Charlotte Ritter (Liv Lisa Fries), a young temp secretary who moonlights in a nightclub brothel to help support her destitute family. Charlotte discovers she has a knack for investigating -- even if she tends to break certain pesky laws in her search for clues -- and she sets her sights on a job as a murder squad assistant. It's not a position that is held by women, but that doesn't dissuade Charlotte.

Meanwhile, a series of conspiracies start to unravel and gradually come to light around our characters. A freight train arrives in Berlin with an extra car not listed on the original paperwork. Inside the car is a cache of gold which once belonged to the family of a Russian count. A Communist cell called the Red Fortress intends to ship the gold to Trotsky in Turkey, to finance a revolution to overthrow Stalin. However, there are others who know about the gold who have different plans.

When authorities learn of the Communist plot, the train is held for inspection. It turns out the other cars on the train do not contain the freight they are supposed to contain either. And certain ranking army officials are not eager for those actual contents to be revealed.

I haven't unpacked all the show's interweaving subplots, partly for the sake of spoilers and partly because the elaborate narrative architecture of the show is far easier to watch and enjoy than it is to concisely parse out. I will say that the writer-director team waste very little of their allotted storytelling space. Seemingly minor characters and events will resurface hours and hours later and become instrumental to the plot of the show. The last episode of season two essentially climaxes in the middle and then wraps up various plot threads for twenty-five minutes. It's admittedly a bit hectic, but the show's overriding panache makes everything go down easy.

The actors are excellent. Bruch has movie star looks, but a character actor's soul. His performance makes us want to believe Gereon is a good guy, even when the character makes self-centered and immoral choices. Fries is a firecracker, who can pull off the dark stuff just as adeptly. Kurth excels at playing an imposing bastard, who nonetheless has a bit of an earthy everyman quality. And the excellence just continues all the way down the cast list.

Without resorting to flagrant pastiche, Babylon Berlin offers a stylishly modern take on its period story. A mixture of vintage and slightly anachronistic elements inform the style of the show -- especially in the many grand nightclub scenes, one of which includes a Bryan Ferry cameo. But Babylon Berlin stops well short of the look-at-me irreverence of Baz Luhrmann's Great Gatsby. The use of 1929 Berlin as a setting inevitably sparks memories of Fassbinder's Berlin Alexanderplatz and Bergman's The Serpent's Egg, and the claustrophobic melodrama of the earlier film mixed with the grungy high-concept paranoia of the latter pretty much sums up the Babylon Berlin recipe.

More than just flashy detective fiction, Babylon Berlin's first two seasons attempt to create the portrait of both a city on the rise and a democracy in danger. To prove politics can be pulse pounding, certain sequences echo classic conspiracy thrillers, like The Manchurian Candidate. Nazis make only a brief explicit appearance in the show at this point, but we can only presume their presence will increase in the ensuing seasons. It's hard not to dread these developments, but I'm quite curious to see how our main characters will navigate these impending cataclysmic events.

*Known in most countries as The Wet Fish but simply called Babylon Berlin in English, to match the show. 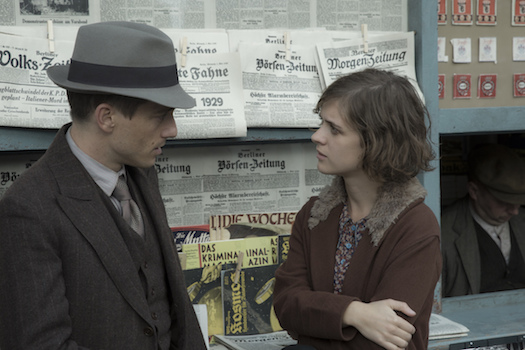 The Blu-ray
Seasons 1 & 2 of Babylon Berlin are presented on 4 BDs (2 per season), housed in a standard-sized keepcase, on back-to-back hubs. It has a cardboard slipcover.

The Video:
The AVC-encoded 1080p 1.78:1 presentation is first-rate. Even without the massive bitrate of some recent Kino offerings (presumably because of the longer runtime of this series), there are no major encoding or compression issues. It's a great-looking new show, which has translated extremely well to HD disc.

The Audio:
The show is offered in either German (with some Russian) DTS-HD MA 5.1 surround audio or DTS-HD MA 2.0 stereo (with optional English subtitles). As with the video, this is a spot-on reproduction of a new soundtrack. No noticeable flaws or errors. The mix is immersive and dynamic. 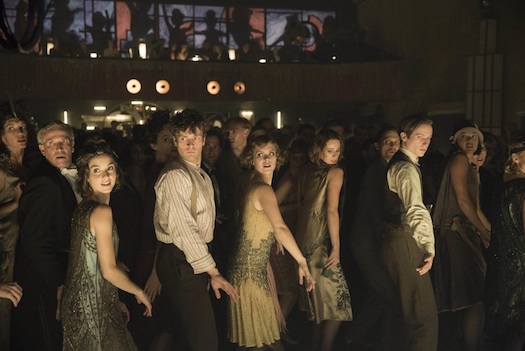