Kino // Unrated // December 1, 2020
List Price: $24.95 [Buy now and save at Amazon]
Review by Stuart Galbraith IV | posted January 12, 2021 | E-mail the Author
Part of the ‘50s vogue for sympathetic portrayals (by white actors) of Native Americans, Apache (1954) is interesting but flawed. It was Robert Aldrich's third feature, following a long career as an assistant director and, immediately before this, several years working in television. His inexperience and the influence of television is in evidence here: the film is lively but choppy continuity-wise, and Aldrich uses tight close-ups so often the film becomes spatially disorienting.

There's plenty of action, however, and star (and co-producer) Burt Lancaster, pushing 40, is in fine athletic form, while the film's empathy toward American Indians is appealing, if muddled in some ways. 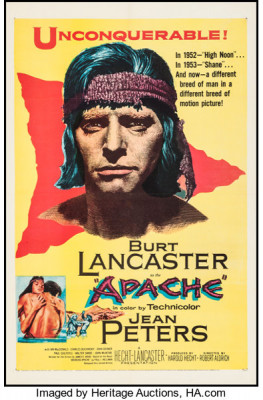 In 1886, Apache chief Geronimo surrenders his tribe to the U.S. Cavalry, in a tense ceremony rudely interrupted by Apache warrior Massai (Lancaster), defiantly charging in with guns a-blazing. He's quickly captured, however, and forced to join the rest of the young men, separated from their women, children, and elderly, loaded onto an eastbound train to be relocated to Florida.

Massai escapes, and in the film's best scenes wanders around late-19th century St. Louis perplexed by such things as Chinese laundries, a restaurant (serving white man's cuisine), women's dresses, a player piano, etc. Lancaster's reactions are interesting because they're not of a primitive man dazzled, even overwhelmed, by modern technology, but rather he finds most of it recognizable but completely alien. Clearly he can't stay here.

Massai encounters a westernized, older Cherokee, Dawson (Morris Ankrum), living in a white man's house with his Indian wife. Dawson implores Massai to adapt to some of the white man's ways, such as farming, acknowledging the days of the warrior Indian are past, that Massai or even thousands like him can't change that.

Instead, Massai embarks on a campaign of terrorism, only to be betrayed by Chief Santos (Paul Guilfoyle), father of prized Indian maiden Nalinle (Jean Peters), she coveted by compliant ex-warrior Hondo (Charles Bronson, still using his birth name, Charles Buchinsky). Massai kidnaps Nalinle, believing she, too, betrayed him, as Massai heads for the hills, to elude recapture during the harsh winter months.

This second-half of the story is far less interesting, with pig-headed Massai constantly at odds with combative Nalinle. Of course, the two are destined to fall deeply in love, and for her to bear him his son. Eventually, together they cultivate a corn field, a modest crop obviously intended as something far grander since, in the overly symbolic climax, Massai hides among the too-few stalks. Their constant bickering is labored and unappealing, slowing the narrative to a crawl.

Amusingly, all of the leads: Lancaster, Peters, Bronson, and even Ankrum, are blue-eyed actors. When they stand alongside real Native Americans appearing as extras the top-billed stars especially come off as unconvincing.

Apache was by no means the first Hollywood movie to present Native Americans sympathetically: Broken Arrow (1950), for one, was a major step in the right direction, while pictures like Fort Apache (1948) dramatized how U.S. policies toward Native Americans, even actions by a rogue officer, can lead to misunderstanding and tragedy. Here, however, none of the white men are likeable, and the screenplay wisely gives the actors playing them, mainly John McIntire, John Dehner, and Walter Sande, varying degrees of racism and intolerance.

Ultimately, though, Massai's actions, killing dozens, is motivated out of a selfish need to retain his warrior manliness, rather than drive the white man from Indian lands. Indeed, throughout the story, he wants no part of even fellow fugitive Apaches, let alone those tamed through Geronimo's surrender. He defines himself one way, and is simply too stubborn to adjust to the tragic but inevitable.

(Spoilers) Two endings were shot. Aldrich wanted Massai gunned down at the end, but was pressured to also shoot a "happy" ending which, of course, is what the film's producers chose. But the "happy" ending begs questions the movie doesn't answer. After the fade-out one can't help but wonder how Massai'll make out, given all his violent mischief. (The fate of the real-life Massai is not known.)

Originally released by United Artists but now part of MGM's library, Apache has never looked good on home video. A full-frame DVD from 2001 used an outdated master, and while Kino's new Blu-ray is appropriately widescreen, the results aren't much better. A trailer, included as an extra, is mostly drained of color, but the trailer is noticeably sharper and much brighter, with ‘50s-era color timing for the nighttime scenes. The feature, conversely, has blotchy color, less detail, and is way too dark. The DTS-HD Master Audio (mono) is not any better, with audible "pops" here and there, like from dirty print source. Optional English subtitles are provided on this Region "A" disc.

Just a trailer, described above.

Worth seeing for its cast, and as a fledgling effort by director Robert Aldrich, as a movie Apache is hit-and-miss while the video transfer is mostly a miss. Rent It.