Return of the Musketeers, The

Kino // PG // December 8, 2020
List Price: $24.95 [Buy now and save at Amazon]
Review by Stuart Galbraith IV | posted January 14, 2021 | E-mail the Author
Adapted from Alexandre Dumas's Twenty Years After (1845), director Richard Lester's The Return of the Musketeers (1989) reunited most of the original cast and key creative force behind the well-regarded and commercially successful The Three Musketeers (1973) and The Four Musketeers (1974).

Return, however, was shrouded in production problems and, ultimately, great tragedy. Its budget and shooting schedule were significantly reduced shortly before production commenced, resulting in a rushed, corner-cutting atmosphere. In this environment Lester's Spanish crew mistakenly sprayed water on a cobblestone street for a scene featuring, on horseback, actor Roy Kinnear, a supporting player in most of Lester's films. Kinnear's horse slipped, Kinnear fell and broke his pelvis. Worse, he received inadequate, possibly even incompetent care at a nearby clinic and died of a heart attack.

The decision by producer Pierre Spengler and (apparently) Lester to finish the film using a double for Kinnear's unfinished scenes angered many. Several actors considered quitting in protest and, reportedly, co-star Richard Chamberlain did leave the film, though his character's reduced role is mostly in keeping with the original novel. Many of those who stayed on regretted their decision later. Immediately after Lester directed Get Back, a record of the 1989-90 Paul McCartney World Tour, but then all but quit the business, Kinnear's death being the primary factor.

All this overshadows The Return of the Musketeers, but while the picture is certainly compromised it's mostly a worthy sequel. 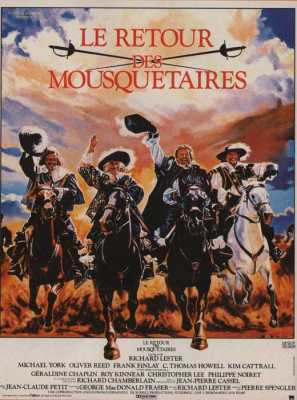 Twenty years after the events in The Three/Four Musketeers, corrupt Cardinal Mazarin (Phillippe Noiret, dubbed) has replaced Cardinal Richelieu, played by Charlton Heston in the original films; a beautiful portrait of Heston-as-Richelieu hangs on a wall. Like his predecessor, Mazarin exerts significant influence over the court of boy-king Louis XIV (David Birkin), the son of Anne of Austria (Geraldine Chaplin).

D'Artagnan (Michael York), his career going nowhere and needing money to live on, agrees to an appointment by Mazarin, D'Artagnan determined to reunite the original Musketeers, all of whom long ago returned to their former lives under their real names. Porthos (Frank Finley) is a bored nobleman, and eagerly joins D'Artagnan, but Aramis (Chamberlain) has become a priest, the Abbé d'Herblay, and refuses. Athos (Oliver Reed) lives quietly if drunkenly on his estate with his young ward, Raoul (C. Thomas Howell), and like Aramis his sympathies are against Mazarin, and likewise refuses to enlist.

Raoul, meanwhile, has already encountered Justine (Kim Cattrall), the daughter of Milady de Winter (played by Faye Dunaway in the original films), she determined to find and kill the Musketeers whom she blames for her mother's execution long ago.

The Return of the Musketeers is best enjoyed a few days or weeks after viewing the original films; without their context, it's rather like watching Return of the Jedi without ever having seen Star Wars and The Empire Strikes Back. This is particularly true here, as Dumas's Musketeer stories are steeped in the politics of 17th century France (and its neighbors, particularly England) with an idealogy that was vaguely pro-monarchy (if an idealized one) and anti-corruption, though in Lester's hands even the benign monarchs are viewed as airheads. Lester wisely wanted to include footage from the first two pictures, primarily to bring viewers up to speed, but producer Pierre Spengler either refused him or couldn't obtain the footage due to rights issues.

After his first two Musketeers, Lester directed the similarly styled Royal Flash (1975), likewise written by George MacDonald Fraser, then the interesting Robin and Marian (1976) but then his career went into a sharp creative decline. He directed the big-budgeted Superman II (1980), finishing the film after Richard Donner's acrimonious departure and, by himself, Superman III (1983), but where Donner understood Superman's place in pop culture mythology, Lester's approach to the material went in an opposite direction, all but sneering and contemptuous.

Which makes The Return of the Musketeers so surprising. Stylistically, it conforms with the quick-paced, wryly satirical films he made throughout the 1960s and returned to for Musketeers and Royal Flash. The Return of the Musketeers would have been better had it more warmth and honest sentiment (of the type in the silent The Iron Mask) than it does but, then again, Lester was the most unsentimental of directors. It is, however, very funny at times, and he and Fraser's historical fidelity help keep it interesting. Michel Legrand scored the original films, but is replaced here by Jean-Claude Petit. His score is too lushly conventional, okay in scenes of derring-do, but inapt for the comical moments.

Kinnear, as manservant Planchet, functioning as a kind of wry Greek chorus, is obviously doubled in several scenes a la "Fake Shemp," the same practice employed when Shemp Howard of the Three Stooges died suddenly and was replaced by a double seen mostly from the back. Lester, at least, found a good mimic to dub Kinnear's lines, but this double's appearance here and there is a sad reminder of Kinnear's untimely death.

Nevertheless, it's still a joy to see York, Reed, Finlay, and Chamberlain, older, a bit sadder, more resigned to their later lives, redeemed somewhat by this last adventure. Fraser's script amusingly acknowledges both Reed's weight gain and notoriety as a big boozer. Cattrall is well-cast, completely believable as the daughter of Dunaway's character. The supporting cast is in fine form as well, with Christopher Lee returning as de Rochefort, Jean-Pierre Cassel returning this time as Cyrano de Bergerac, and with newcomers Bill Patterson as Charles I and a brief but hilarious cameo by Billy Connolly as his golf caddie.

The Return of the Musketeers was released theatrically in Europe but not in the U.S. Instead, it went straight to cable television, which is where this reviewer first saw it. The handsome Blu-ray presents the film in an excellent video transfer with especially good DTS-HD Master Audio stereo surround, adapted from the original Dolby Stereo mix. This version obviously dubs the performances of French actors Noiret and Cassel, though a French DVD of the English track retains their original voices; too bad that wasn't done here. Optional English subtitles are provided on this Region "A" disc.

Supplements consist of a trailer and a new audio commentary track by film historian Peter Tonguette.

Though plagued by so much tragedy, The Return of the Musketeers is mostly a worthy follow-up to the original films, and Highly Recommended. Just be sure to watch the first two before dipping into this.