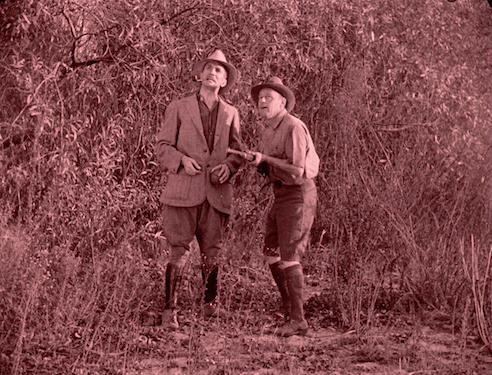 Kino Classics and Something Weird Video have teamed up for the restoration series Forbidden Fruit: The Golden Age of the Exploitation Picture, which has so far included titles like Mom and Dad, Reefer Madness, Unashamed, Marihuana, Tomorrow's Children, She Shoulda Said No!, and Test Tube Babies.

The eighth entry in the series, Ingagi (1930), was an enormous box office success that presages a lot of genre filmmaking, from Cannibal Holocaust to King Kong. It was sold as a legit African safari documentary, with a filmmaking group of explorers in search of a tribe that sends its infertile women to live and mate with gorillas -- or "ingagi," as they are called in Kinyarwanda.

To modern eyes, it's easy to see the fakery. The filmmakers have repurposed old footage -- much of it from a 1915 film called Heart of Africa, documenting an expedition by Lady Grace Mackenzie. They have shot clearly staged footage to shape their story. Then they have added a supercilious narration track to tie it all together.

The first hour of the film is intriguing, but not particularly inflammatory. There are nice vignettes of African* city life, such as some Hindu street performers, that gives way to jungle footage. The expedition encounters crocodiles, monkeys, pythons, lemurs, giraffes, leopard, hippos, and lions. Some creatures we get to just witness, while others are trapped or brutally killed. (Viewers put off by injury to animals are advised to stay away).

Throughout, the narration condescends to the natives who help guide the expedition, calling them "boys" and making small jokes at their expense. At one point, a tribal ceremony is shown and the narrator comments that it is "like something out of an opium smoker's dream."

The film's preposterous and much-hyped closing twenty minutes are pure sideshow hokum, but they are not the film's only attempt at believe-it-or-not showmanship. One vignette that made me laugh was the discovery of a "tortadillo," a hybrid species that is clearly achieved by putting a fake armadillo tail on a tortoise. In a similarly silly moment, we are told about an encounter with pygmies but the footage clearly shows some children who are dressed as natives and given fake facial hair.

The climax is distasteful and -- like most snake oil -- ultimately dissatisfying. The restoration includes the full uncensored conclusion, in which several African-American actresses wander around naked, pretending to be the native brides of the Ingagi. A small child seen only in long shot is claimed to be the half-human/half-animal spawn of the Ingagi's mating with one of these women** (yikes!). When the Ingagi is finally seen, it is obviously a guy in a gorilla suit. To the film's credit, it's a great-looking gorilla suit, but an obvious fake nonetheless. Charles Gemora, who plays the gorilla, was a makeup artist who showed up as a gorilla in over fifty films, including doubling Marlene Dietrich in Blonde Venus when her character wears a gorilla suit.

Ingagi is fascinating even if it's not entirely fun. There's definitely some interest in the classic wildlife footage, but the continued brutality of the hunters (which admittedly is not shown as explicitly as it could be) eventually becomes deadening. And the way the black characters are treated -- whether it's the actual African natives put down by the narration or the American actors put into demeaning situations -- is so offputting and infuriating that it would derail any self-respecting Bad Movie Night.

*I am vague here, because the film is vague, never specifying from which African countries the footage originates.

**One presumes that the 1940 film Son of Ingagi was betting viewers would think it was a film about that baby gorilla-human all grown up. While Son of Ingagi might be notable as the first horror film with an all-black cast -- written by and costarring Amos and Andy star Spencer Williams -- it has no narrative connection to Ingagi. 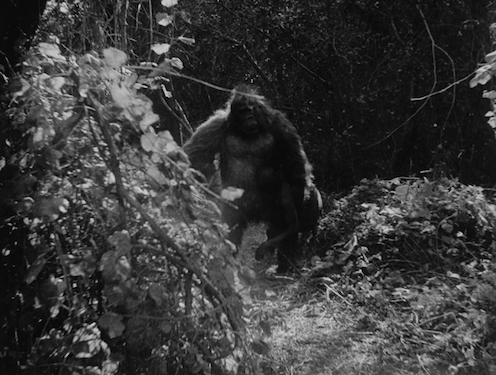 The Video:
This AVC-encoded 1080p 1.33:1 presentation is sourced from a new 4K restoration based on two 35mm prints stored in the Library of Congress. The film itself is made up in large part of older and somewhat damaged footage -- the narration even comments upon this a few times -- so it's unsurprising that a lot of dirt and scratches remain. Contrast and detail fluctuate throughout, based on the provenance of the shots. It's easy to spot the staged footage, because it was clearly the easiest to restore. Most of the film is tinted light red, with nighttime shots presented as untinted black-and-white.

The Audio:
Even more than the picture, the LPCM 2.0 mono audio is pretty rough stuff. The narration is always understandable, but there is plenty of age-related distortion and damage. It has been cleaned-up to be palatable, but this definitely sounds like an uncared-for film. The dopey organ score that plays throughout can be heard just fine, not that that's good news. Something nifty: the optional English SDH track includes transcriptions of not just the narration, but also of a few passages from the original script that have not survived on the soundtrack.

- There are two different audio tracks. On one, historian Kelly Robinson takes a look at the film in the context of gorillas' history as villains in horror. On the other, Forbidden Fruit series curator Bret Wood looks at the history of the film, its making, and its controversies. He also mentions having misgivings about reviving such a racist film, but thinks its influence was so great that to ignore its place in history is dishonest. Both tracks are rewarding listens.

Final Thoughts:
Genre and exploitation buffs will surely have an interest in the long-unavailable Ingagi. The Forbidden Fruit crew has done a good job of restoring the film as best they can, and they have done an excellent job of supplementing the film with cogent and informative commentaries. The film itself is cruel to humans and animals, so I can't, in good conscience, recommend it on its own. This package, however, is certainly Recommended. 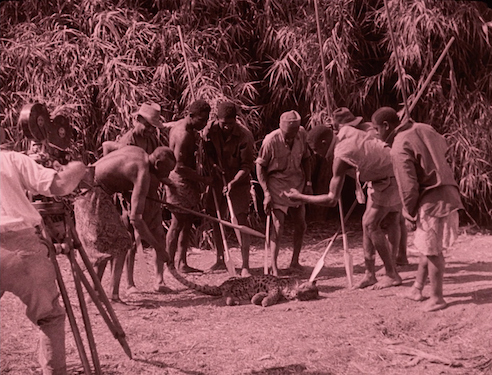