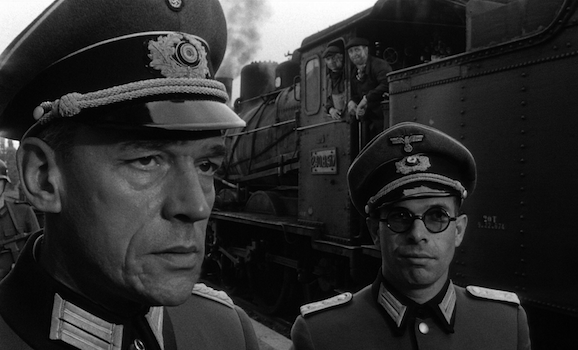 John Frankenheimer's 1964 action thriller The Train has already been released on home video in North America three times in the past seven years. In 2014, Twilight Time released a limited edition Blu-ray that quickly went out of print. In 2015, Kino Lorber jumped in with a new DVD that was sourced from the same master as the Blu-ray and marked a great improvement over MGM's original '90s disc release. In 2016, Twilight Time released an Encore Edition of its Blu-ray, since the demand was still there. Now, sadly, Twilight Time is no more, so Kino Lorber is able to pair its DVD release with a newly updated special edition Blu-ray that is essentially the same as the previous releases with a few extra bells and whistles (see Special Features below).

As for the film, it comes from director Frankenheimer's "golden age," which also saw the release of The Manchurian Candidate and Seconds. As such, it's unsurprising how deftly crafted The Train is, with Burt Lancaster leading a small crew of underground French operatives during the waning days of the Nazi occupation. In fact, original director Arthur Penn was fired because star Lancaster wanted to guarantee the film didn't skimp on crowd-pleasing action in favor of existential character study.

Well, this viewer might be the rare person who kinda might have liked to see a version where Penn stayed and Lancaster got the boot. Don't get me wrong: Frankenheimer is no dummy, and he keeps all the nailbiting action rooted in character. And of course Lancaster is a tough guy icon -- I recently reviewed his early turn in Brute Force and was in total awe. But casting red-blooded American Burt Lancaster as a French resistance fighter is almost as ridiculous as casting Klaus Kinski as an Irishman. Lancaster's character, Labiche, is set-up as being resistant to the idea of the film's whole mission, which further creates the impression that Lancaster doesn't belong there.

The mission involves a train loaded with priceless French art squirreled away during the war by Nazi colonel Franz von Waldheim (Paul Scofield). Now that the war is clearly breaking bad, von Waldheim desperately wants to collect his ill-gotten masterpieces and skedaddle. Allied forces are on their way, so von Waldheim needs everything transported to Germany tout de suite. Railroad man Labiche and his collaborators, Didont (Albert Rémy) and Pesquet (Charles Millot), have to figure out ways to delay, misdirect, and -- if it comes to that* -- derail the train.

Scofield is the perfect baddie: single-minded, sharp, and refined. Plus, he's clearly as attached to the paintings for their artistic merit as their resale value. I will acknowledge that there is logic in setting up a contrast between von Waldheim and Labiche's values so completely that Labiche doesn't give a shit about art and would rather just blow up the train. But there's a part of me that wonders what would be so wrong if Labiche shared his countrymen's enthusiasm for preserving the "soul" of French culture, which the paintings are meant to represent.

Speaking of those countrymen, The Train has a great French supporting cast, including Jeanne Moreau as a widow, who runs a small hotel where Labiche is forced to cool his heels by the Nazis, and Jean Renoir favorite Michel Simon as a grouchy engineer, who is only too happy to wreak some damage to keep those paintings from crossing the border. Only drawback: some of the French cast members -- Simon included -- have been dubbed with new voices that are an uncanny mismatch (especially since the lip-sync is dead-on).

The film has a series of tense and intricately constructed setpieces that do their fair share of crowd-pleasing. The boldest involves an elaborate bit of subterfuge where Labiche and co. have to convince some Nazis on board that they are driving the train on schedule to Germany when they are in fact taking a loop back into France. There are also some tricky shenanigans with the railroad track itself which lead to a few spectacular train disasters.

I admit I wasn't as bowled over by The Train as many of my DVD Talk colleagues linked above were. But I must also admit The Train is a breath of fresh air, in terms of being a suspenseful action flick that has layers of personality and makes (a little) room for grander considerations about war and idealism and art. It hits a lot of the right notes; I just wish that it hit more. 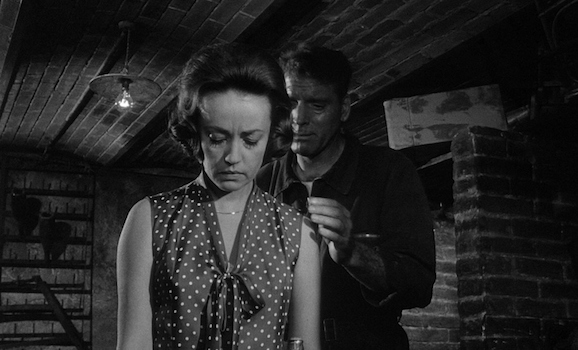 The Blu-ray
Kino Lorber's Special Edition of The Train comes with a limited edition slipcase and reversible cover art that highlights two different vintage images. It includes a small booklet featuring an essay by Julie Kirgo. I do not have the old Twilight Time edition to check and see if this is identical to her booklet essay from that release (though I would presume it is).

The Video:
This viewing was my first exposure to The Train, so I haven't seen the other recent Blu-ray editions. However, reputable online sources suggest that this AVC-encoded 1080p 1.66:1 presentation is essentially identical to (and is definitely sourced from the same master as) Twilight Time's OOP and Arrow's Region B Blu-rays. In other words, if it ain't broke, don't fix it. The detail and contrast is striking, complimented by a satisfying filmic texture. Frankenheimer was fond of deep focus, and nothing looks incorrectly soft or sloppy. There are a few specks here and there, but nothing majorly distracting.

The Audio:
No complaints from the DTS-HD MA 2.0 mono audio. Dialogue is clear and Maurice Jarre's rousing score is well-supported. When guns fire and explosions go boom, you can hear that stuff real good too. DVD Beaver notes that this version is sampled at 16-bit, while other Blu-rays went with 24-bit. This first-time viewer would have had no clue. An optional English subtitles track is provided.

- This is the original commentary that has been on the film at least as early as DVD, and probably dates back to the laserdisc. Frankenheimer has good insights, but he often just watches scenes play out before commenting. That leaves big gaps, which can be mildly frustrating.


Final Thoughts:
If you already own one of the recent Blu-ray editions of The Train, you're in good shape. The main feature is essentially of the same A/V quality. There are a few new and different special features on Kino Lorber's new disc, but I wouldn't personally consider them worth a double- or triple-dip. For the first-time viewer, however, this disc certainly comes Recommended. 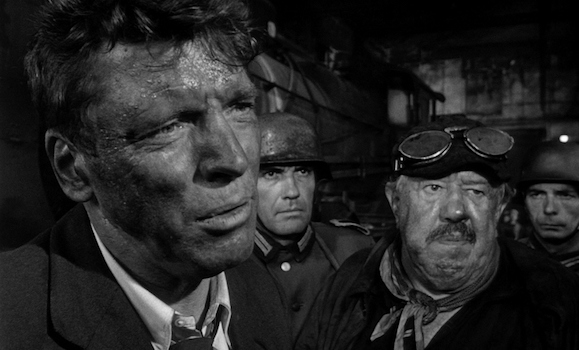