Code Red // PG // February 16, 2021 // Region 0
List Price: $29.95 [Buy now and save at Amazon]
Review by Stuart Galbraith IV | posted February 11, 2021 | E-mail the Author
In 1978, I was on a summer vacation trip to Traverse City, Michigan with my family, and we were staying in some crummy motel when, on the TV there, an ad came on for a movie called Slithis. I was mesmerized by this Creature from the Venice Canal, and after we returned home to suburban Detroit I eagerly looked for it in the newspaper ads. Alas, to my best knowledge it never played that market or, if it did, Slithis somehow eluded me.

So, for nearly 43 years I've wanted to see it, and now, thanks to Code Red's new Blu-ray, that curiosity has be satiated. Under its proper, onscreen title, Spawn of the Slithis the movie is pretty much what I expected it to be all along: ultra-cheap but, just barely, professional; derivative and old-fashioned, an anomaly even when it was new. Clumsy and even stupid at times, but also for fans of such monster movies, it's surprisingly watchable and even mildly admirable here and there. Drawing from Creature from the Black Lagoon (1954), The Monster of Piedras Blancas (1959) and, especially during its last 15 minutes, Jaws (1975), Slithis more or less accomplishes what it sets out to do. 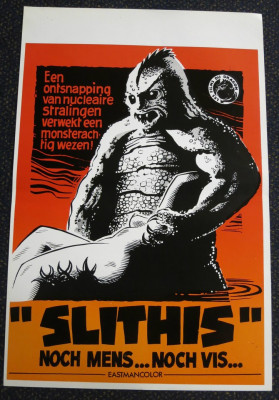 Wayne Connors (Alan Blanchard, who resembles a young Tom Jones) is a dissatisfied journalism teacher at Palisades High living in Venice, California when a series of strange killings - mutilated dogs and a middle-aged couple - inspire him to return to his indie reporter roots, though wife Jeff (Judy Motulsky) is at first annoyed by Wayne's growing obsession for answers.

From the outset, the movie audience is aware that a Gill-Man-type amphibious creature (it also resembles the monsters from The Slime People) is responsible, it praying upon various winos and hippies lounging about the Venice canals, near some of the same locations Orson Welles used for Touch of Evil. Aided by high school science teacher Dr. John (J.C. Claire, certainly not that Dr. John) and eccentric Jamaican (?) fisherman Chris Alexander (Mello Alexandria) with additional information provided by radiation-scarred Dr. Burick (Dennis Falt), Wayne gradually determines that the Slithis is the result of radioactive waste mutated and evolved from mere protoplasm. Wayne and Dr. John shut the gate providing ocean water access into the canals, but have a harder time convincing the local police, especially Venice's wild-eyed, excitable police lieutenant (Hy Pyke).

Most of the cast and crew that made Slithis did few, if any other films. The IMDb seems to think that the Jack Kelly providing a radio announcer's voice is the Jack Kelly famous for TV's Maverick, but that seems mighty unlikely. The only name in the credits that jumped out for this reviewer is the film's script supervisor, Mimi Leder, later an occasional director but best known as a supervising producer on China Beach and ER. The three leading actors have a combined total of five projects, for instance, though Blanchard and Motulsky come off reasonably well, with naturalistic performances. As is often the case with low budget films, these performances are highly variable. Blanchard is good enough that I expected his resume to be peppered with lots of supporting parts on ‘70s TV detective shows like Cannon and The Streets of San Francisco (instead, he did just one other movie) while, conversely, Hy Pyke's police lieutenant is outrageously hammy, like Lionel Atwill on amphetamines.

Taking a page from better low-budget horrors like The Blob (1958), director Stephen Traxler's script admirably attempts to flesh out his stock characters with bits of dimensionality. The idea of making the hero a high school journalism teacher is pretty clever, as is the use of the school's science lab to carry out the investigations. Slithis's various victims are given little quirks, especially John Hatfield's Bunky and Rocky Fumarelli as two winos. Some of this character fleshing-out serves to burn enough film to reach an acceptable running time, but it's still better than average for this sort of picture.

Some of Traxler's plotting is clumsy, however: Wayne, intrigued by the gruesome murder of the middle-aged couple at the beginning, simply walks into their ravaged, still-bloodstained house. There's no police tape, no "No Entry" postings, and the front door isn't even locked. The crime scene is still a mess, with blood everything and broken knickknacks strewn about. A policeman (David Ridenour) interrupts Wayne's trespass, but instead of arresting Wayne he unhesitatingly provides details about the investigation. Some of Traxler's directorial choices are also a bit odd. The movie opens with kids throwing a frisbee around, shot in slow-motion, but the slow-motion continues even when one of them finds the mutilated remains of several dogs, as if Traxler's cameraman forgot to switch the motor back to normal 24fps. Traxler clearly had a fondness for similar ‘50s films: the movie features POV shots of Slithis that are clearly a nod to those in It Came from Outer Space (1953).

Mostly, though, Slithis does what it sets out to do, and for a reported cost of $100,000 looks a lot more polished than other films at that budget level. The Slithis costume is unusually good, and, considering its PG rating, the movie surprisingly gruesome and even features brief flashes of (female) nudity.

Code Red's Spawn of the Slithis is derived from a 2017 2K scan of the original camera negative and looks great throughout, pleasingly sharp and free of debris, and with accurate color timing. The mono sound is also fine, despite the low-budget shortcomings, and the disc is region-free.

Supplements include a short, deleted scene that's missing audio but which explains a continuity error in the final cut. A trailer is also included.

Not exactly a good movie but, for fans of ‘50s monster movies it's an amusing outlier, and Spawn of the Slithis is Recommended.