Kino // Unrated // February 9, 2021
List Price: $29.95 [Buy now and save at Amazon]
Review by Stuart Galbraith IV | posted February 12, 2021 | E-mail the Author
The 3-D Film Archive strikes again, with another outstanding restoration of a classic ‘50s 3-D title, Wings of the Hawk (1953). Though not particularly memorable as a Western, despite sure-handed direction from Budd Boetticher, it's a very well-crafted studio product of its era, and it uses the 3-D format exceptionally well, this release also including a restoration of its outstanding stereophonic audio. Further, among the extra features is a rare 3-D cartoon short, Hypnotic Hick, the first and last Woody Woodpecker cartoon of its kind. 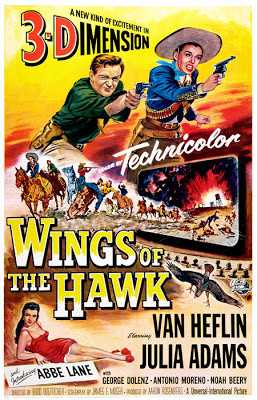 Set in 1911, during the Mexican Revolution, Wings of the Hawk stars Van Heflin, in his first film after Shane, as "Irish" Gallagher, an American prospector who strikes gold just in time to have his mine seized by the corrupt official of the province, Col. Paco Ruiz (George Dolenz, Mickey's father). Pursued by Ruiz's Federales, it looks like curtains for Irish when a band of rebels led by Raquel Noriega (Julia [Julie] Adams) sends them packing.

Unsure of what to do about the American, the wounded Raquel blindfolds Irish and takes him back to their weak-willed leader, Arturo Torres (Rodolfo Acosta), to whom Raquel is engaged. Irish removes the bullet lodged in Raquel's shoulder, and he teases her for "playing soldier." Eventually, with nothing to lose, Irish joins their fight, hoping their efforts might help him retake his stolen mine. Raquel, meanwhile, is anxious to rescue her sister, Elena (Abbe Lane, then married to Xavier Cugat) who has become Ruiz's mistress. Further, Raquel and other rebels, including Tomas (Pedro Gonzalez Gonzalez), but not the overly cautious Arturo, are anxious to acquire guns in an elaborate plan hatched by Machiavellian revolutionary Pasquel Orozco (Noah Beery Jr., wildly cast against type).

Amusingly, much of the effectiveness of the 3-D is the result of studio penny-pinching. Near as I can tell, not one foot of film was shot in Mexico. Rather, the vast majority appears to have been filmed on hills of the backlot overlooking the studio, once spacious land now overrun by Universal's ugly theme park. Clifford Stine, better known for his cinematography in the special effects unit, occasionally worked as the primary Director of Photography on movies requiring extensive special effects (e.g., Abbott & Costello Go to Mars, This Island Earth, The Brass Bottle) or had unusual technical requirements, like 3-D. He brought enormous imagination to It Came from Outer Space, Universal's first big 3-D hit, and his staging here takes full advantage of the format, if less so than that sci-fi classic.

The movie is standard stuff for the most part: the trite combative if burgeoning romance between Irish and Raquel, with his now-dated chauvinistic dismissiveness toward any woman engaged in traditionally male roles. Acosta's rebel leader is so pathetically spineless there's no doubt in whose arms Raquel will wind up at the end, nor any doubt about Arturo's fate with the Federales.

But the movie delivers with plenty of action, the occasional chair thrown at the 3-D cameras, and some of the staging is, in 3-D, really interesting, particularly an execution witnessed at ground level through iron bars from a cellar. A Katy Jurado type would certainly have been better-suited as a fiery Latina but it's still fun to see Julie Adams give it a whirl, and she certainly looks sexy in her form-fitting rebel pants. And as bizarre it is seeing Noah Berry Jr. as a wily revolutionary, his performance is actually quite good.

Pedro Gonzalez-Gonzalez provide much-needed, wonderfully executed comedy relief. Gonzalez had recently appeared as a contestant on the quiz show You Bet Your Life with Groucho Marx, resulting in what was probably the funniest segment of that series' entire dozen-year run; even Groucho couldn't contain his laughter as Gonzalez unwittingly drove the proceedings off the rails. In Wings of the Hawk, he reprises some comical dance steps he performed on that show, and soon after was put under contract by John Wayne's production company, though this was his first film.

Kino's Blu-ray of Wings of the Hawk is offered in both 3-D and 2-D versions (as is the cartoon). The feature is presented in its original 1.85:1 widescreen. Apparently, the 3-D Film Archive had its work cut out for them with faded original film elements (IPs of the left and right images were 2K scanned), which don't quite "pop" with vibrancy like other early ‘50s Universal color titles, but which are more than adequate. The image is impressively sharp, even in 3-D, and as noted above the process is utilized well throughout. (The original intermission break is also included.) The 3.0 original 1953 High Dynamic Range theatrical stereo mix is equally impressive. Frank Skinner's score really comes alive, while dialogue and sound effects are aggressively directional. A 5.1 Surround remix is also offered, and optional English subtitles are provided on this Region "A" release.

The real draw here is the Woody Woodpecker cartoon Hypnotic Hick, which uses 3-D far better than Lumberjack Rabbit, the more familiar and more widely available Bugs Bunny short in 3-D. Though Woody as a character pales compared to Bugs, the cartoon offers all kinds of amusing 3-D antics that give the process a workout. Also included are good commentaries by film historian Jeremy Arnold and 3-D expert Mike Ballew (his running 20 minutes); and, in 2-D, a trailer.

A must for 3-D buffs, Wings of the Hawk is a DVD Talk Collectors Series title.