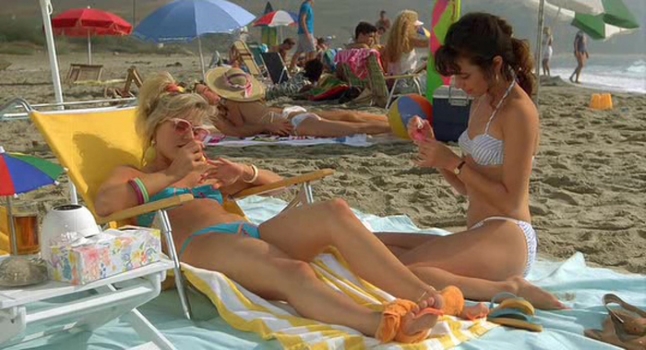 NOTE: The images accompanying this review are from various online sources and do not reflect the quality of the Blu-ray under review.

The 1987 comedy The Allnighter is an odd duck of a film. The only starring vehicle to date for rocker Susanna Hoffs, of "Eternal Flame" hitmakers The Bangles, The Allnighter attempts to merge the raunchy teen comedy sensibility of the '80s with the more innocent tone of '60s beach party movies (but not in the self-consciously goofy style of Back to the Beach). It's got bikini babes, hunky surfer dudes, and an all-night college graduation fiesta at the beach. Cowriter-producer-director Tamar Simon Hoffs (who is also Susanna's mother) strives to make a candy-colored hangout movie, but the end result is lacking in story and laughs. Arguably, this kind of movie could survive with one and not the other, but the lack of both makes this would-be soufflé rather flat and boring.

Susanna Hoffs's character, Molly, is stuck with a classic teen-movie conundrum: she wants to find true love on the night before her college graduation. On the Blu-ray's included commentary track, Tamar Hoffs admits that the script was conceived for high school characters, and the idea of desperately seeking true love over the course of one night seems more suited to that milieu. A self-possessed twentysomething like Susanna Hoffs doesn't naturally seem like she should have these kind of coming-of-age issues.

Molly wrestles with admitting her feelings to blonde surfer C.J. (Terlesky), but also entertains a crush on aging rocker Mickey (Twin Peaks' Michael Ontkean). Meanwhile, her roommate Val (Dedee Pfeiffer) has second thoughts about getting engaged to a yuppie dolt. Joan Cusack is Gina, the third roommate who is obsessed with recording and editing her final video project the whole time (even though they're graduating tomorrow?).

The main trio make convincing friends, as does C.J. and his surfer pal Killer (James Anthony Shanta). The cast's general good spirits make The Allnighter fairly easy to watch, even if they can't completely fight off the inevitable tedium brought on by the film's sloppy storytelling. Pam Grier similarly provides a glimmer of fun when she shows up late in the film as a stern police sergeant, but the role is sadly too small and perfunctory to make a major difference.

The Allnighter has an undeniably offbeat energy which, along with Susanna Hoffs's presence, has ensured a cult following for this flick. I wish that was enough to convince me to recommend it. (It's not.) 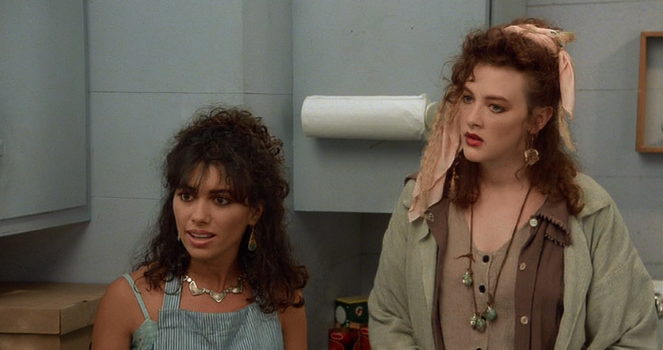 The Video:
The AVC-encoded 1080p 1.85:1 presentation is solid. Colors and clarity are both strong. Kino has once again afforded a generous encode bitrate to squeeze every last bit of image out of Universal's old master. It looks better than some.

The Audio:
The DTS-HD MA 2.0 audio is clean and clear, with a decent amount of oomph. Optional English subtitles are provided.

- Ported over from the 1999 Anchor Bay DVD. (Sadly, the short film The Haircut, starring John Cassavetes, did not also make the leap from that DVD to Blu-ray.) A great discussion between mother and daughter about their memories making the film. Susanna gets embarrassed over certain scenes, especially the scenes in her underwear.

Final Thoughts:
A game cast can't rescue this teen comedy from its undernourished script. If you're already a fan, Kino has honestly created a solid presentation with good supplements. But I don't foresee a lot of new converts to the Allnighter cult. Skip It. 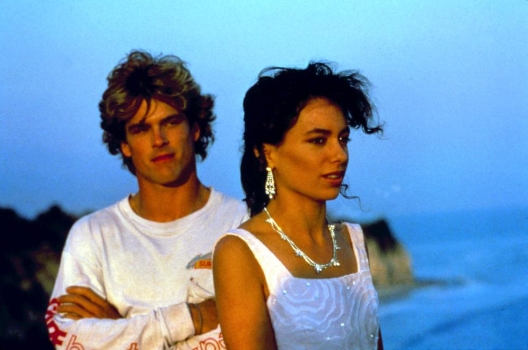