Kino // Unrated // February 9, 2021
List Price: $24.95 [Buy now and save at Amazon]
Review by Stuart Galbraith IV | posted February 18, 2021 | E-mail the Author
Though it has its share of good points, including a good performance from star Charles Laughton, The Suspect (1944), a period film noir from director Robert Siodmak, operates from an untenable premise leading to an inevitable, unsatisfying resolution. The video transfer is also problematic, comparing unfavorably against other black-and-white Universal titles from the mid-‘40s also on Blu-ray, while the audio has strange issues this writer has never quite encountered before. 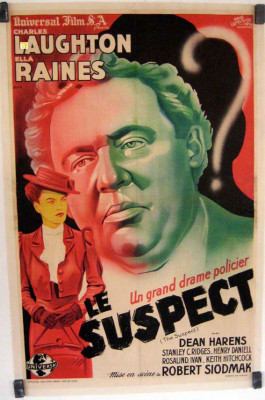 In Edwardian London, Philip Marshall (Laughton) is the manager at a bustling tobacconist firm, much respected there, and admired by his neighbors for his unusually kind and generous demeanor. However, his wife Cora (Rosalind Ivan) is a shrew with no redeeming features at all, and despite Philip's best efforts to maintain a happy home, Cora makes his life miserable. Further, as the film opens, in a fit of rage Cora has destroyed a week's worth of paperwork their son, John (Dean Harens) toiled over. This so upsets him he moves out, leaving poor Philip even more miserable and alone.

At the office, Philip is approach by a pretty young woman, Mary Gray (Ella Raines), seeking employment. Philip is unable to offer her a job, but when he finds her sobbing on a park bench later he kindly begins to look after her, even helping her find employment elsewhere. He's clearly smitten, but even more surprising is that, despite their age difference, and the fact that Philip is fat and not handsome, she falls deeply in love with him. When Cora refuses to divorce him, Philip breaks off his relationship with Mary and tries to make his own marriage work against impossible odds, but then Cora threatens to ruin Mary's life, too, and, offscreen, he murders her.

The problem here is that Laughton's Philip is entirely sympathetic, even saintly, while Cora is a monstrous woman with no redeeming qualities at all. Later in the story (spoilers), Philip's spendthrift next-door neighbor, Simmons (Henry Daniell) tries to blackmail Philip over the murder and Philip is forced to do away with him, too. But he's just as awful as Cora, leeching off and abusive toward his sweet-natured wife (Molly Lamont). As with Cora, absolutely no one mourns his death and everyone is far better off.

Unfortunately, The Suspect is a Hollywood movie made in 1944, when the Production Code absolutely forbade any movie character from getting away with murder, so the story can only end unhappily for all the sympathetic characters. Were this a European film from, say, a decade later, The Suspect would probably have allowed Philip, Mary, Mrs. Simmons et. al. to live happily ever after, and the same story might even have been done as a black comedy. Instead, The Suspect is merely mildly depressing, especially since it's clear from the start that no uplifting ending is remotely possible.

Another problem with the film is that its story requires a police inspector to gradually close in on Philip's crimes. Stanley Ridges plays that inspector here, Huxley, a low-key, Columbo type. But Ridges lacks the charisma the part needs (imagine an Alastair Sim-type in the role) and his detecting is frequently ludicrous. In his first scene with Philip, Huxley explains to Philip how he believes Cora might have actually died, telling Philip in exhaustive detail How He Did It with zero evidence but ripe with eerie shadows and damming music. Mostly though, Ridges adds nothing to film except pushing the story to its forgone conclusion. Ridges had one of those generic faces and acting styles that was rarely memorable, though he was good enough in the right role to occasionally make an impression. He was, for instance, both funny and sinister in Lubitsch's To Be or Not to Be, while grievously miscast in others (e.g., Black Friday).

The ineffectiveness of Ridges is made all the more obvious in Laughton's scenes with Henry Daniell, who is very memorable as the next-door cad. If one needed an oily, sinister type one could do far worse than cast Daniell, who is a pleasure to watch here, especially since Laughton wisely underplays Philip in these scenes allowing Daniell to be more flamboyant.

The rest of the cast is adequate though the unexplained mixture of British and American-accented actors in Edwardian England draws attention to itself.

Something seems to have gone wrong here. Recent Universal transfers of their ‘30s-‘50s titles have been almost uniformly splendid, but The Suspect just looks fair. The opening titles and other opticals (dissolves, process shots) look unusually soft and grainy, and in straight cuts the image wavers between impressive and disappointing, even within the same reel. Even stranger, the audio sounds weirdly unfinished: there are moments with the soundtrack is absolutely dead with no ambient sound effects at all. The dialogue, music and sound effects tracks are all there, but in dialogue scenes the mix sounds unpolished, as sound effects levels are inconsistent from shot-to-shot within the same sequence. Why this is I have no idea. It's possible the film was rushed into release without the usual polish from Universal Sound Department, or maybe whomever did the transfer used some odd, half-finished source. It's not horribly distracting and most audiences probably won't even notice, but it did attract my attention. Optional English subtitles are provided on this Region "A" title

The single supplement is an audio commentary by author and critic Troy Howarth, he finding much less fault with it than I did.

Worth seeing for Laughton and a few other reasons but overall disappointing, The Suspect is mildly Recommended.