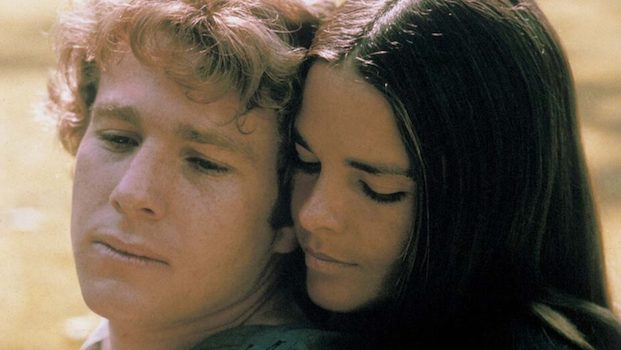 Love Story announces its attention to dehydrate its viewers out through their eye sockets immediately. The film is bookended by shots of Ryan O'Neal's character, Oliver Barrett IV, looking on mournfully as the character's voice-over demands, "What can you say about a twenty-five-year-old girl who died?" The film attracted enough viewers who wanted to know the answer that it was a 1970 megahit. It helped save Paramount Pictures from closing up shop. It instantly turned Ryan O'Neal and Ali MacGraw into superstars. It gave the world the iconic and utterly dubious maxim, "Love means never having to say you're sorry."

But is it actually any good?

In the end, one's opinion of the film will likely boil down to exactly how much it made them cry. In the case of this reviewer, I got choked up a few times but never felt a dam-burst of emotion leading to full-on sobs. So, my reaction is: pretty good, but I've cried at better.

In a way, this might be because the relationship between filthy rich Harvard boy Oliver and pulled-up-by-her-bootstraps Radcliffe girl Jenny Cavalleri (MacGraw) is relayed in brief sketches that might have been bracingly modern fifty years ago, but feel too elliptical and superficial in a modern context. Their early courtship is characterized by faux-screwball banter, with smart-aleck Jenny filtering her class resentment into lighthearted putdowns. She constantly calls Oliver "preppie" (is this where Saved by the Bell got it from?), and he calls her a "bitch," with different modifying adjectives at different times. In classic Hollywood terms, of course, this means they really love each other. At least Oliver has the self-awareness to declare, "verbal volleyball is not my idea of a relationship."

Erich Segal's script offers some predictable hurdles for the couple to overcome. They have wildly different dreams: Jenny is set to study music in Paris, while Oliver is on track to attend Harvard Law School. Oliver's father, Oliver III (Ray Milland), is an old-money snob who cuts off support to his son when the lad decides to marry Jenny. (In contrast, Jenny's dad is unsurprisingly a warmhearted regular guy, played by John Marley from Faces and Cat Ballou.)

Nonetheless, their love gets them through the lean years. Oliver scores a high-paying lawyer gig in New York, and life seems pretty cushy until the revelation that Jenny is dying.

I don't believe the word "leukemia" is ever spoken in the film -- I had to find it in a synopsis of Segal's bestselling novel, based on his script -- and the vagueness around Jenny's terminal illness is another place where the film seems glibly sketchy and robs the tragedy of greater impact.

Although it is typically thought of as a chick flick, this is definitely Oliver's story, which might be its biggest flaw. Jenny's trajectory -- the promising musician who gives up her dreams in the name of love and ends up dying before she even gets to see the world -- plays out largely in terms of how it makes Oliver feel. He feels guilty, he feels grateful, he learns a vital life lesson. Even that signature line about never saying you're sorry unwittingly suggests Jenny is admitting that her feelings don't matter: Well, your character has developed, which is priority number one.

Of course, I know there are armies of Love Story fans that would likely shout me down for saying all that. And I think there is a lot about Love Story that works. O'Neal and MacGraw are young and pretty, have great chemistry, and are intensely charming, even when they are saying horribly combative things to each other. MacGraw is particularly luminous, and it's hard not to join the millions who have fallen in love with her right along with O'Neal's character. Writer Segal and director Arthur Hiller bring a convincing naturalism to most scenes, which makes it easier to avoid pigeonholing this flick as airport-paperback, proto-Lifetime-network schlock. Love Story was clearly a big hit in 1970 because, well, its heart was in the right place. However, fifty years later, it's more apparent that the film's values were slightly out of whack. 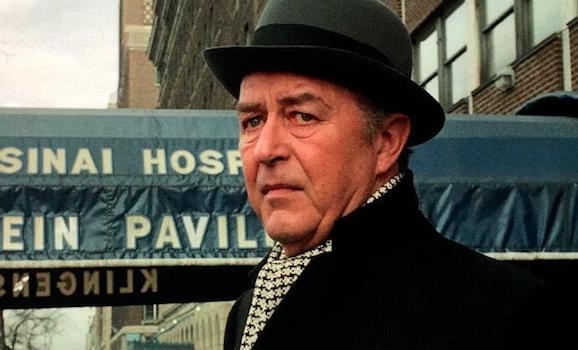 The Blu-ray
Love Story is spine #15 in the Paramount Presents series. The standard keepcase has a cardboard slipcover that opens to reveal a vintage poster design. The cover art features a picture collage on the reverse side (fully visible when you take out the disc). A Digital HD code is included.

The Video:
Per other reviews, Paramount's earlier Blu-ray was no slouch in the A/V department, but this new AVC-encoded 1080p 1.85:1 transfer is sourced from a 4K restoration and looks absolutely outstanding. Apart from a few opticals and dissolves, the image is consistently razor-sharp (within the expected realm of Richard Kratina's sometimes loose and handheld location camera work). Encoded at a high bitrate, there are no noticeable digital issues. A consistent satisfying film texture.

The Audio:
The film is best served by the English DTS-HD MA. 5.1 surround remix. There are not a lot of flashy immersive effects in the remix, but Francis Lai's Oscar-winning score is far more dimensional and impressive in 5.1. Purists can stick with a lossy Dolby mono (224kbps) mix, in English, German, French, or Japanese. Subtitle options: English, English SDH, German, French, or Japanese.

Special Features:
All the special features (including the audio commentary) have the same subtitle options as the feature.

Final Thoughts:
It's ironic that Love Story was such a universal hit in 1970, because more recent reviews can't seem to decide whether the movie is pandering schlock or a genuine romantic triumph. Maybe the truth lies somewhere in between. Love Story is a well-crafted film and genuinely felt story that is nonetheless pretty superficial and indicative of a largely bygone (dare I say it?) Boomer mindset. If you can somehow approach Love Story without baggage -- either positive or negative -- I think it plays as a solid little film. Paramount's new Blu-ray is a notable technical upgrade over earlier releases, so the whole package comes Recommended. 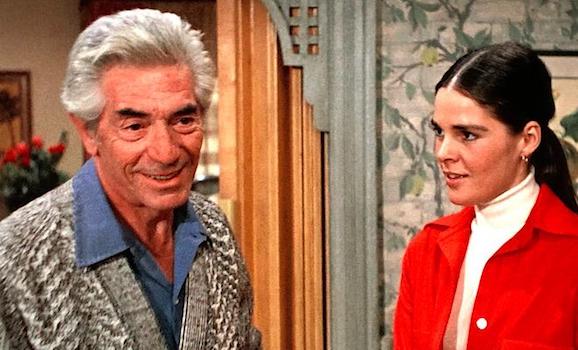