Man With a Movie Camera

The Movie and the Audio: 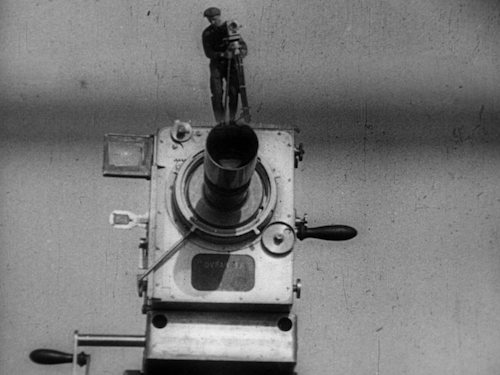 Kino's Blu-ray comes from a British Film Institute presentation of this silent Soviet classic that is set to a musical score by Michael Nyman, best known as a frequent collaborator of Peter Greenaway and the composer for Jane Campion's The Piano. It's an audio/visual marriage made in hell. Nyman's music often ignores the nuances of Vertov and editor Elizaveta Svilova's visual rhythm, trying to override it with a new rhythm and a dissonant atmosphere. Of course, there are moments where the score seems to work with the film. It's natural that sometimes it should. After all, you can play Dark Side of the Moon while watching The Wizard of Oz and sometimes that seems to sync up too.

There's nothing deficient in the LPCM 2.0 stereo audio presentation on the disc, so my low audio score in the sidebar is purely related to my dislike for this music. Nyman's minimalist compositions, when placed against Vertov's visuals of people at work and machinery in action, can't help but feel like a self-conscious knock-off of Philip Glass's score for Koyaaniqatsi. That comparison isn't fair to Nyman, to Glass, or to Dziga Vertov, but I calls 'em like I sees 'em. So, if you watch this version of Man with a Movie Camera, I'd recommend putting something else on as soundtrack. (Hey, maybe Dark Side of the Moon? Couldn't hurt to try, right?)

Also, turn off the subtitles. The optional English SDH track is almost entirely unnecessary, since the film only has some introductory titles that need translating. Nonetheless, the subtitle track keeps you informed of when the music changes mood from, say, "(soft orchestral music)," to "(hurried orchestral music)." It's ridiculously dumb, especially since the music doesn't typically fit the picture!

The pictures in question are structured to play out vaguely like "a day in the life" or to create a "city symphony" like Walther Ruttman's Berlin: Die Sinfonie der Großstadt. In Vertov's vision, the movie cameraman is a part of the Moscow ecosystem, distilling the essence of city life -- especially among the working class -- for the sake of later entertaining those who lived it. (The film is bookended by shots of a movie theater audience watching and enjoying the cameraman's labor.) Different sections of the film deal with the city "waking up" (not just the people, but the factory machinery and the city transports), or the general circle of life (images from a wedding, from a funeral, from a hospital birth, all cross-cut to suggest simultaneity), or the visual juxtaposition of different kinds of work (the hands of a seamstress matched to those of a manicurist matched to those of this film's editor Elizaveta Svilova).

The man with the movie camera (really, Vertov's brother Mikhail Kaufman and his colleagues) is the ever-present central figure. There are dozens of shots of the filmmakers laboring to capture the footage you are seeing: most impressively, improvised tracking shots off the sides of streetcars or on a tripod stationed in the back of a convertible. Through the use of tricky double-exposures, Vertov includes images of the cameramen floating like spectral sentinels high above the bustling city, doing their work.

It's still a wildly impressive film. Man with a Movie Camera's DNA can be traced through hundreds of documentary, experimental, and art films in the ensuing years, but the effect here still feels unique and fresh. 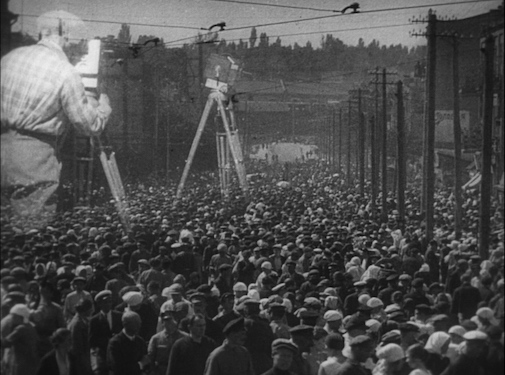 The Video:
This film was released on Blu-ray six years ago, as part of a Dziga Vertov collection by Flicker Alley. Based on most accounts, that edition has been carefully restored and looks quite good. It's puzzling then why Kino's AVC-encoded 1080p 1.33:1 presentation (which, to be fair, is essentially the BFI's presentation) looks so rough and dirty. The film is consistently plagued by dirt, specks, and scratches, with some minor stains, density issues, and occasional image wobble. It just looks like a flat transfer from a print, with some tweaking done to the contrast. Based on other online reviews, this version is darker than either the BFI's Region B release or the Flicker Alley version.

- Like all of the bonuses, this is a well-researched combo of history and analysis.

Final Thoughts:
Man with a Movie Camera is as dazzling and strange as it was 90+ years ago. Any film buff worth their salt should check this film out. However, this presentation doesn't offer the film in the best light. While this stand-alone edition is cheaper than other Dziga Vertov Blu-ray collections on the market, I still think it's a Rent It at best. 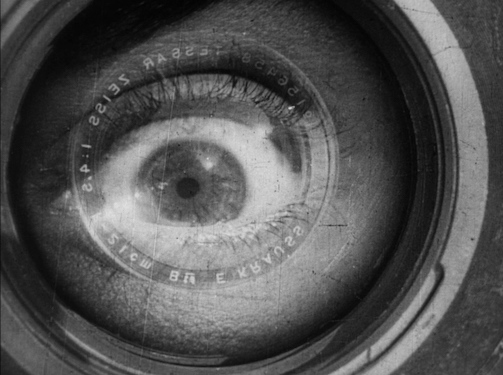