Kino // PG // March 23, 2021
List Price: $24.95 [Buy now and save at Amazon]
Review by Stuart Galbraith IV | posted February 25, 2021 | E-mail the Author
Actor Gregory Peck starred in some good Westerns later in this career (The Stalking Moon, Billy Two Hats) but Shoot Out (1971) is as bland as its title. Made by the same Producer-Director-Screenwriter team behind the popular and acclaimed True Grit (1969), Shoot Out clumsily tries to recapture some of that magic, pairing bank robber Peck with a young girl, grafting that story onto an unrelated, underdeveloped revenge plot. That doesn't work, but the biggest problem with the film is that the three thugs dispatched to follow Peck's character throughout the story are contenders for the Most Gratingly Annoying Villains in Western Movie History. 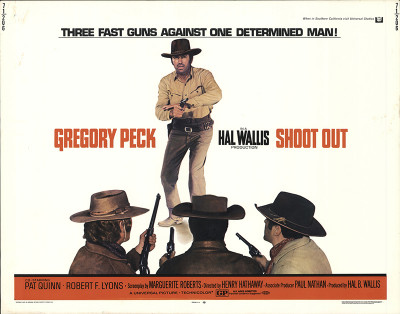 The movie opens with Clay Lomax (Peck) released from prison after seven long years, following a bank robbery during which his partner, Sam Foley (James Gregory), shot him in the back and left him for dead. (A visually dull flashback shows this.) Now rich and respectable, Foley hires Bobby Jay Jones (Robert F. Lyons), Skeeter (John Davis Chandler), and Pepe (Pepe Serna) to track but not kill Lomax. It's obvious to the movie audience but not Foley that Jones is both completely irresponsible and a psychopath to boot.

Lomax misses all this because he's at the train station where train conductor Frenatore (Paul Fix) drops off a package for Lomax: seven-year-old girl Decky (Dawn Lyn), daughter of another old prostitute-girlfriend of Lomax's, recently deceased. The child may or may not be his, but he's nonetheless saddled with taking care of her. Meanwhile, Trooper survives just long enough to gasp out Foley's whereabouts, and so Lomaz and Decky set out with the three thugs plus an effectively kidnapped Alma trailing them.

Shoot Out has its good points. Gregory Peck is excellent, as he almost always was, as is Dawn Lyn. Their scenes together have a real, Paper Moon-like charm. Susan Tyrrell is also very impressive in an ultimately thankless role, putting new wrinkles on the hooker-with-a-heart-of-gold character, Tyrell coming off here a lot like a young Gloria Grahame. There are a lot of nice, little moments peppered throughout, like Lomax lassoing a young, wild foal for Decky to ride, but she's upset that it's being taken from its mother, forcing Lomax to release it. Another good scene follows, with Arthur Hunnicutt playing an old homesteader haggling with Lomax over the price of another pony.

This was Henry Hathaway's penultimate feature, preceding the minor blaxploitation (!) thriller Hangup in 1974, a sad career-capper. Unfortunately, much of what's wrong with Shoot Out is Hathaway's fault. The acting is wildly inconsistent, playing like the cast was left to its own devices, and one suspects the quality of the scenes between Lomax and Decky were largely Peck's doing rather than Hathaway's. Seasoned performers like Paul Fix and Jeff Corey are fine in their parts, and Susan Tyrrell is much better than her part is written, but Lyons, Chandler, and Serna are just awful as the primary villains, outrageously overacting as mindless, sadistic thugs. Instead of threatening and terrifying they come off as unbelievable and insufferable. Lyons is especially bad, particularly during the ludicrous, disappointing climax. An actor like Bruce Dern wouldn't have had any better luck with the poorly written part overall, but it's likely he would have been subtler and less thoroughly unreal.

Marguerite Roberts wrote the script, her last. Busy throughout the ‘30s ad ‘40s, she was blacklisted in 1951 for refusing to answer to the House Un-American Activities Committee but came back for a flurry of work during the 1960s. True Grit is by far her best screen credit of that period, but that closely followed Charles Portis's novel, later effectively remade with Jeff Bridges. Shoot Out, on the other hand, just sputters.

Licensed from Universal, Shoot Out, in 1.85:1 widescreen, looks good, not exceptional in any way, but workmanlike solid throughout, as is the DTS-HD Master Audio (mono). Optional English subtitles are provided on this Region "A" encoded disc.

Supplements are limited to a trailer and a new audio commentary track by film critic Nick Pinkerton.

For Western fans, Shoot Out has enough good points to make it worth seeing once, but it's doubtful you'll ever want to pull it off the shelf again. Tepidly Recommended.