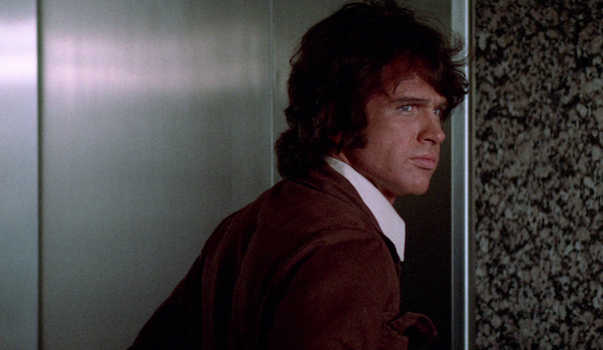 Even setting aside its potentially inflammatory subject matter, the 1974 political thriller The Parallax View is a truly unusual movie.

It opens with a political assassination whose details are intentionally supposed to remind viewers of the infamous killings of President John F. Kennedy and his brother Senator Robert F. Kennedy, and then it proceeds to dramatize one of the finest "just because you're paranoid doesn't mean they're not after you" plots ever executed in American film.

Director Alan J. Pakula also seems to toss in and toss away genres at unexpected intervals, starting with a baseline of Manchurian Candidate-type intrigue, before shifting gears to the kind of carefully wrought character study seen in Pakula's Klute, some newsroom tension that would anticipate All the President's Men, and even some broad action-movie tropes like a barroom brawl and a muddy car chase. Then the film ends in a roughly 20-minute section that could have been imported from a European art film, full of deadpan wide shots and featuring not a single word from our main character.

But the headline shouldn't be that The Parallax View is a strange and almost-schizophrenic movie. Instead, we should marvel at how the film is arguably more entertaining and resonant because of its elegant/inelegant mash-up of styles and ideas.

Warren Beatty stars as reporter Joseph Frady, who was stranded on the ground when political candidate Charles Carroll was gunned down at a campaign event high up in Seattle's Space Needle. Years later, his ex, Lee Carter (Paula Prentiss), comes to him, frightened. She was present at the Carroll assassination, and in the ensuing years, six of the people present at the event have all died of "mysterious circumstances." At first, Frady dismisses her concerns as paranoia, but then Lee ends up on a coroner's slab. So, despite the misgivings of his editor (the great Hume Cronyn), Frady starts poking his nose into these strange deaths.

The Parallax View's storytelling is pretty clean and straightforward, but it has some good surprises worth preserving, so I'll start to get a little vague here. Frady becomes more convinced of a conspiracy once his life is directly threatened and some of the people he taps for information start winding up "accidentally" dead. In his snooping, he stumbles upon a recruitment questionnaire for the Parallax Corporation. Based on the questions, he suspects Parallax is recruiting and creating assassins. To firm up his hunch, he poses as an antisocial candidate for recruitment.

Beatty's performance is good throughout, but he's particularly interesting when Frady is trying to be an Angry Young Man that Parallax would want to court. This performance within a performance is extremely nuanced and subdued, but it's also distinct from the character's more typically Beatty-ish behavior.

One of the film's key sequences is a visual test that Frady is given to see if he has the right temperament for the job. It's a montage of still images juxtaposed with words like "Love," "Father," "Mother," and "Me," that is clearly designed to rile up the kind of individual who feels alienated and left behind in '70s America. (DVD Savant did a thorough piece just on this montage that is worth checking out, along with his review of Paramount's original DVD.) The film is coy about revealing how exactly Frady passes the test: does he somehow fake it? Or is he actually someone whose state of mind isn't totally divorced from those men who can be manipulated into killing on demand?

The Parallax View takes on a fatalistic air in its final sequences, but that does nothing to unknot the tension. Frady tries to thwart another potential assassination attempt, but we can't help feeling like he's out of his depth -- or, more to the point, is he in too deep?

The strange style shifts of The Parallax View can feel too intellectual for their own good and might rob the film's climax of dramatic power for some viewers. This is how I felt when I first saw the film years ago. But, when viewed in the right headspace, those bold choices distinguish the film even more than its unapologetically cynical politics. This is a film that all too sadly has gained in relevance and potency with time.

The Blu-ray
The Parallax View is packaged with an insert featuring an essay by Nathan Heller and a 1974 interview with Alan J. Pakula.

The Video:
Sourced from a new 4K restoration, this AVC-encoded 1080p 2.39:1 presentation really just brings out the idiosyncratic beauty of Gordon Willis's cinematography. Excellent detail, contrast, color saturation. There are inevitably a few of Willis's signature "Prince of Darkness" shots, and the encode gives us nuanced detail in those shadows without distracting crushing. Outstanding.

The Audio:
The LPCM mono audio shows remarkable depth and nuance too. Even without stereo or surround effects, this is a surprisingly rich soundtrack. An English SDH option is provided.

(HD, 15:00) - I'm dubious of anything over a few minutes being labeled as an "Introduction." The comments from Cox (director of Repo Man and Walker) contextualize the film within the realm of JFK conspiracies and the general film culture of the time, which was full of stories of paranoia and political corruption, but are spoiler-y enough that I think it's best to leave this discussion until after an initial viewing.