Crossed Swords (aka The Prince and the Pauper)

Kino // PG // March 23, 2021
List Price: $29.95 [Buy now and save at Amazon]
Review by Stuart Galbraith IV | posted March 1, 2021 | E-mail the Author
A handsomely produced if slightly stodgy historical-adventure targeting family audiences, Crossed Swords (originally released in the U.K. as The Prince and the Pauper, 1977) was criticized at the time for reasons that seem less serious crimes today. Most negative reviews were unduly harsh on star Mark Lester (Oliver!) for both his performance and his age, while Richard Fleischer's direction, to a lesser degree, was unfavorably compared to Richard Lester's helming of The Three and Four Musketeers (1973/74), made by the same producers and screenwriter and featuring a few of the same cast members (Oliver Reed, Raquel Welch, Charlton Heston, etc.).

But Crossed Swords' all-star cast is clearly having fun, much of this fun successfully conveyed to the movie audience. Filmed mostly in Hungary, the production design and cinematography (by Jack Cardiff) are good, featuring a few still-amazing process shots concerning Lester's dual role. 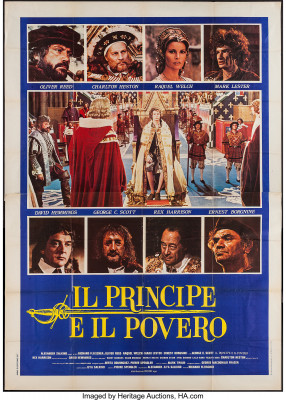 Adapted by George MacDonald Fraser from Mark Twain's 1881 novel, the movie is set in 16th century London where a dying King Henry VIII (Charlton Heston) orders the Duke of Norfolk (Rex Harrison) arrested to ensure a smooth royal transition for his son, Prince Edward of Wales (Lester). Meanwhile, pauper Tom Canty (also Lester), trained as a thief by his abusive father, John (Ernest Borgnine), in running from the law, ends up at the palace, eventually falling down a chimney into Edward's royal bedchamber. Noticing their incredible resemblance, Edward orders Tom to swap clothes so that Edward might appear at a masked ball that evening dressed as a pauper. However, the Duke of Norfolk mistakes prince-turned-pauper Edward for an intruder, and has him thrown out of the castle. The pauper-turned-prince, Tom, unsure of what to do, pretends to be heir to the throne until Edward's return.

Outside the castle, Edward's claims to be the Prince of Wales riles an angry mob, but he's rescued by swordsman Miles Hendron (Oliver Reed), who believes Edward to be a harmless lunatic. Briefly back under his father's thumb, John drags Edward to caverns where a gang of thieves and paupers, led by a former monk known as The Ruffler (George C. Scott), hide out. Later, reunited with Miles, they visit Miles's estate, stolen by his scheming brother, Hugh (David Hemmings), who has also taken Miles's fiancée, Lady Edith (Welch), as his wife. Meanwhile, back in London, Henry VIII dies and as preparations are being made for Edward's coronation, Tom lets his role as England's new ruler go to his head, despite the protestations of Princess Elizabeth (Lalla Ward).

At the age of nine, Mark Lester became an international star following the huge success of the movie version of the musical Oliver!, Lester playing Oliver Twist. As a child performer, he enjoyed steady employment over the next several years, and popularity in unexpected places. A 1971 British drama in which he starred, Melody, is virtually unknown in the U.S. but has been warmly regarded throughout Japan ever since, the kind of picture still frequently shown on Japanese television and available on Blu-ray.

As an actor, Lester's range was always pretty limited. Truffaut effectively capitalized on Lester's strengths expressing fear and the boy's innate awkwardness for a short scene in Fahrenheit 451 (1967). (Throughout his career, Lester had an odd way of walking, as if always unsure of his footing.) He was 17 when he made Crossed Swords. His voice had changed but his range remained limited as did his essential awkwardness. At this point in his life he was also rail-thin, like a scarecrow, making Edward's acrobatic skills with a quarterstaff hard to swallow. However, he's not nearly as awful as critics at the time (and many now) claim: he's just a former child actor who never quite evolved into an adult one. The historical Prince of Wales was just nine at the time of Henry's death, something reviewers pointlessly latched onto, forgetting that scores of great films have taken far greater liberties with historical fact.

Production of the film must have seemed like old home week: in addition to those returning from Musketeers, many in the cast, including Welch, Heston, Borgnine, Harrison, and others had worked with director Fleischer before. That many of these English characters have slight (Heston and Scott) or dodgy (Borgnine) accents or, in Welch's case, an emphatically American one, are a minor issue. The film boasts impressive, expensive-looking sets populated by scads of costumed extras; it looks more lavish than its $8 million budget.

Fleischer seemed oblivious to screenwriter Fraser's (or Twain's) sense of humor and irony; other than a couple of moments, he treats it as a straight historical drama, though the acting often rises to the occasion, especially by Rex Harrison and Oliver Reed. Indeed, it's one of Reed's best screen performances, even if the film itself is ultimately minor.

Filmed in Panavision and running 113 minutes, Crossed Swords looks just okay on Blu-ray. Film elements under that title and even the original Warner Bros. logo are sourced, but the video master, touted as a new 4K restoration from the original negative, is much too dark for my tastes. The DTS-HD Master Audio (2.0 stereo surround) fairs much better. Optional English subtitles are provided on this Region "A" encoded disc.

Supplements, all on the same disc as the feature, include an "international version" (but also titled Crossed Swords) of the film running 121 minutes, but it's in standard definition, from an old CanalPlus transfer. Considering how few will want to rewatch the film in that format, it might have made more sense to increase the main feature's bit rate by limiting the international cut to those scenes not in the shorter version. (It includes optional English subtitles as well.) Additionally, there's a new, 18-minute interview with Mark Lester, he now only faintly resembling his former actor self, covering all the salient points of the film, including an expectedly outrageous anecdote about boozy Oliver Reed. A theatrical trailer is included, as well as an audio commentary featuring film historians Howard S. Berger, Steve Mitchell, and Nathaniel Thompson.

A good family film, despite its many but minor faults and too-dark video transfer, Crossed Swords is Highly Recommended.