Paramount // Unrated // January 26, 2021
List Price: $29.99 [Buy now and save at Amazon]
Review by Stuart Galbraith IV | posted March 5, 2021 | E-mail the Author
Arguably comedian Danny Kaye's best comedy, The Court Jester (1956) is finally on Blu-ray with a video transfer befitting its VistaVision origins. It's doubtful the movie has looked this good since its initial releases; better, certainly, than past inadequate past home video versions.

Kaye was unique among comedians of the time. After a few, low-budget two-reelers he made for Educational Pictures in the late-1930s, Kaye made his feature debut in the splashy Technicolor musical Up in Arms (1944), the first of many films he made for producer Samuel Goldwyn, who spared no expense on future Kaye vehicles. Indeed, Kaye starred in nothing but big-budget color films until 1958's Me and the Colonel, his first starring feature in black-and-white. The Court Jester was reportedly the most expensive film comedy made up to that time, at $4 million, and the money is all there, up on the screen.

Popular but not commercially successful when it was new, The Court Jester and The White Christmas (also featuring Kaye) belong in the increasingly tiny handful of classic films that people who normally avoid old movies still watch. 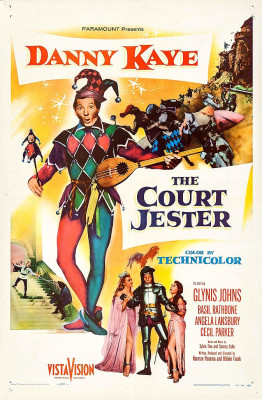 Following the murder of the Royal Family of England by Lord Ravenhurst (Basil Rathbone, in his first movie in ten years) and his men, Roderick the Tyrant (Cecil Parker) has usurped the throne, residing in the castle with his marriage-aged daughter, Gwendolyn (Angela Lansbury). News arrives that the infant king, with his unmistakable birthmark, the "purple pimpernel," survived the attempt on his life, and is safely being held by the Black Fox and his band of rebels, hiding out in the Sherwood-like forests nearby.

Fearing for the infant's safety, the rebels disband, entrusting the baby to Hubert Hawkins (Kaye), the rebels' minstrel, and Maid Jean (Glynnis Johns). Hiding out in a barn, they encounter Giacomo (John Carradine), en route to the castle as the King's newly hired jester. Jean knocks Giacomo unconscious, believing it a swell chance for Hawkins to infiltrate the castle and restore the throne to the true King of England. With some reluctance, Hawkins assumes Giacomo's identity but soon after Jean is taken prisoner, as a "wench" for the King's upcoming ball.

At the castle, the audience but not Hawkins soon realize that the real Giacomo is also an expert assassin hired by Ravenhurst to prevent an alliance between Roderick and Sir Griswold of MacElwain (Robert Middleton). Further, man-starved Gwendolyn has her confidant, castle witch Griselda (Mildred Natwick), cast a spell on Hawkins. At times, under Griselda's influence, he's dashing and fearless, boldly romancing the Gwendolyn and planning assassinations with Ravenhurst, and at other times, as Hawkins-as-Giacomo, scared out of his wits that Jean's scheme will unravel at any minute. Get it? Got it? Good.

Norman Panama and Melvin Frank produced, directed, and wrote the funny script. They'd been writing partners since 1935, famously for Bob Hope's radio show and some of his movies at Paramount, including the best of the "Road" pictures with Bing Crosby, Road to Utopia (1945), for which they were nominated for an Academy Award (at a time when few comedies were so honored). They first worked for Kaye on Knock On Wood. Though overly long and padded with production value, the farcical screenplay wittily spoofs earlier swashbucklers, especially Adventures of Robin Hood (1938) which, of course, featured Rathbone as Sir Guy of Gisbourne. The picture has scads of funny, quotable dialogue ("The pellet with the poison's in the flagon with the dragon! The vessel with the pestle has the brew that is true!") while Kaye is quite hilarious in several scenes, none better than when, disguised as an old man with a bad cough, being questioned by the highly suspicious Captain of the Guard (Herbert Rudley).

Partly what makes The Court Jester so delightful is that while some in the cast like Johns and Parker effortlessly alternated between comedy and drama, others like Rathbone, Natwick, Middleton, and Rudley rarely appeared in comedy films, and certainly never before given the opportunity to earn laughs on their own playing straight-man (or -woman) to Kaye's minstrel. The vessel with the pestle exchange, for instance, works partly because of Kaye's hopeless confusion but equally so because of the earnestness and urgency of Mildred Natwick's spot-on performance.

The musical numbers, by Sammy Cahn and Sylvia Fine (Kaye's wife) are delightful, too. The opening titles ("Life Could Not Better Be") have Kaye onscreen playing around with the billing of the cast and crew. Rathbone must have been delighted: his name reappears onscreen twice. "Outfox the Fox" offers clever choreography incorporating Hawkins's friends, a band of midgets, while "I'll Take You Dreaming" and "The Maladjusted Jester" provide songs essential to any Kaye vehicle, respectively, a sentimental lullaby and comical tongue-twister.

Credit, too, must go to the special effects team of John P. Fulton, Irmin Roberts, and Farciot Edoart, who handled the movie's numerous matte shots, all flawlessly executed or nearly so. Many sci-fi films of the 1950s have fewer optical effects than this musical-comedy.

The only real fault with the film is that, like many of Kaye's vehicles, its lavishness tends to overwhelm the comedy. Though a gorgeous film to look at, one almost wishes it had one-quarter the budget and two-thirds the running time (trimming all the unnecessary fat). The release of a new, Technicolor Danny Kaye musical must have been a big deal throughout the ‘40s and ‘50s, but one wonders what kind of career Kaye might have enjoyed doing smaller-scale but perhaps even funnier comedies occasionally, movies driven more by more realistic characters and situations and less on lavishness and pageantry.

The Court Jester was shot in VistaVision, which ran standard 35mm film through the camera horizontally (like a still camera) rather than vertically, the norm for motion pictures. So instead of exposing film in which each frame was, roughly speaking, 35mm wide and four perforations (i.e., sprocket holes) in height, VistaVision exposed frames 35mm high and eight perforations wide. When VistaVision movies are remastered from their original negatives for Blu-ray as this was (in 6K, no less), this means a source image about twice as sharp as conventional 35mm movies, resulting in titles like White Christmas, The Ten Commandments, Vertigo, and One-Eyed Jacks, movies that look stupendous in high-definition. The Court Jester, which never looked good before on home video, now finally sparkles as it should, with an extra-sharp, extra-bright and steady image and rich, vivid color. The 1.78:1 widescreen image, approximating the original VistaVision aspect ratio, compliments the DTS-HD Master Audio, available in 2.0 mono in English, French, and German, with optional subtitles in those languages. The disc is Region "A" encoded.

Supplements are limited to a digital copy code for those who want to watch the film that way; a trailer in standard definition, and a short featurette hosted by Leonard Maltin. Maltin's segment is really designed for mainstream audiences, not film or comedy buffs, so it's short (7 minutes) and doesn't go into much detail but generally hits all the salient points.

A still-delightful comedy the entire family can enjoy, The Court Jester finally looks as good as it should, and is a DVD Talk Collector's Series title.