Santo in The Treasure Of Dracula: The Sexy Vampire Version 4k Restoration

VCI // Unrated // February 9, 2021 // Region 0
List Price: $29.95 [Buy now and save at Amazon]
Review by Stuart Galbraith IV | posted March 8, 2021 | E-mail the Author
Hold on to yer hats -- this one gets pretty convoluted. One of the great icons of Mexican popular culture, El Santo (born Rodolfo Guzmán Huerta) was a silver-masked wrestling star who, beginning in 1958, concurrently starred in more than 50 feature films made through 1982, two years before his death in 1984. In these films El Santo ("the Saint") played a souped-up version of himself, a wrestling champion who moonlighted as a crime fighter and scientific genius, in stories often incorporating sci-fi and/or horror elements. Though he never removed his mask, Santo was never regarded as anything less than a pillar of his community.

One such film was Santo en el tesoro de Drácula ("Santo in ‘The Treasure of Dracula'"), released in 1968. Like other Santo films of the period, it was shot in black-and-white, but a separate color version, El vampire y el sexo ("The Vampire and Sex"), was filmed simultaneously for release outside Mexico. That version features an abundance of topless women, though limited to footage of their naked, copious breasts, with Dracula occasionally caressing their bountiful bosoms, some approaching Russ Meyer movie proportions. Though at no point does Santo himself ever interact with the semi-naked women, Santo the actor was concerned these scenes might damage his squeaky-clean image -- in the movie, he politely turns down alcohol, preferring coffee -- and appears to have made some kind of agreement with the producers to suppress the "sexy" international version, at least within Mexico.

However, film elements for El vampire y el sexo were discovered around 2010 and, despite protests from wrestler El Hijo del Santo ("Son of Santo"), a restored version of the international version premiered in Guadalajara in 2011.

VCI's Blu-ray of the 4K restoration is confusingly marketed, but consists of only an English-dubbed version of El vampire y el sexo. Not included is the black-and-white Treasure of Dracula, nor is there an option to listen to the film in its original Spanish, though optional English subtitles are provided for the English audio. The English dubbing is apparently recent, with credits for that work tacked on after the movie ends. The Hispanic actors doing the dubbing are generally quite good; the one dubbing Santo sounds a lot likethe original star. 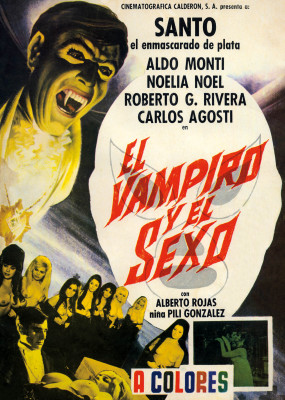 In this entry, Santo has invented a kind of time machine; for some reason the elaborate set-up has been installed at the home of Dr. Sepulveda (Carlos Agosti), who lives with his daughter, Luisa (Noelia Noel), and her adopted ward, Paquita (Pili Gonzalez), the little girl's parents having been killed by gangsters. Santo has invited a group of scientists to inspect the time machine, but they merely scoff. Santo is uncharacteristically unprepared: he has no volunteer to demonstrate the time machine, so the haughty scientists go home.

Luisa, however, believes in Santo, and volunteers to be the first to try the device, its design blatantly imitative, though effectively so, of the big set in Irwin Allen's The Time Tunnel, if greatly reduced in size. The time machine doesn't work like most such devices in movies, for what it actually does is send Luisa, suited-up in a gold jumpsuit, back in time to a past life. As such, Luisa finds herself in late 19th century Mexico where, now the daughter of Professor Soler (Jorge Mondragon), she becomes the target of "Dr. Alucard," Dracula (Aldo Monti) himself. Santo, Dr. Sepulveda, and comic relief Perico (Alberto Rojas) are able to follow Luisa's movements via an all-seeing television monitor.

The way-back scenes are a reasonable approximation of the look of Hammer's Dracula movies. With Luisa already sporting bite marks on her neck, her father sends for the very Van Helsing-esque Professor Van Roth (Fernando Mendoza), who often exclaims "Mein Gott!" with a Spanish accent. Bizarrely, though Santo can whisk Luisa back into the present at any time, he waits until well after Dracula his taken Luisa as his vampire bride, she even turning into a bat at one point, and until seconds before Van Roth is about to stake her in the heart before Santo finally returns Luisa to the present.

Ah, but that's just the beginning of this story. Back in the present, Santo hopes to recover the Dracula's treasure, a jewels-filled coffin, from a nearby crypt. However, "The Black Hood," looking like the villain in from a German krimi, is aware of Santo's efforts and determined to get the treasure for himself, even if it means bringing Dracula back to life!

The Santo movies are an acquired taste, to be sure, but can be very entertaining when viewed in the same spirit as Mexican audiences first saw them then. Holding them all together is Santo himself, whose earnestness and clean-cut image is the core of their appeal. By all accounts, Huerta essentially became Santo in real life, nearly 24-7, much like William Boyd and Leonard Slye gradually came to be Hopalong Cassidy and Roy Rogers offscreen as well as on, appearing in public only as those genuinely beloved screen characters. Santo, apparently, was never seen in public without his silver mask. After his retirement, he appeared on a Mexican talk show and, without warning, finally, fleetingly exposed his face for no more than a second, effectively saying goodbye to his fans. He died a week later.

This international version of Santo in ‘The Treasure of Dracula' is a fairly typical entry, with its singularly unreal plotting with a total disregard for logic and plausibility. Despite the usual over-lit lighting style common to these films, scenes set in the past achieve a reasonable approximation of the look of the Hammer Dracula films, with halfway decent fog-shrouded sets and, occasionally, evocative camera angles and lighting effects. It's a hodgepodge of genre tropes, with amusing variations. Rather than garlic, the usual vampire deterrent, for some reason here it's mistletoe used to keep Dracula at arm's length, Van Roth bandying about a twig resembling a wishbone. The nudity, largely confined to Dracula's crypt, stops the narrative dead in its tracks, and is reminiscent of such gratuitous scenes in Jess Franco's films, though more professionally (if still artlessly) photographed. Likewise, Santo movies often crudely cut away to wrestling ring matches, as if acknowledging the wrestler's day job. Here, the "Black Hood" proposes a match to settle a dispute over Dracula's treasure, so Santo matter-of-factly agrees to resolve things by wrestling the villain's son, Atlas.

For those accustomed to mediocre, full-frame transfers of Santo movies, this 4K restoration will be something of a revelation. While far from perfect, with scattered shots showing damage and technology stretched in bringing color back to gone-magenta film elements, mostly this widescreen presentation looks well above average, with a decently strong image and, for the most part, vibrant color. The English-only audio is strong as far as the newer dubbing goes, okay insofar as the music and effects tracks. The disc itself is region-free.

Supplements include lengthy comparisons (running about 25 minutes) between this version and the black-and-white Mexican release version, it with poor picture quality and, curiously, also presented in English. Also included are short clips from other Santo movies featuring the same dubbing cast, hinting without ever stating explicitly at more Santo titles down the pike.

I would have preferred both versions of the film and Spanish audio options with English subtitles, but Santo in ‘The Treasure of Dracula', "The Sexy Vampire Version" (as VCI calls it) serves as a good introduction to the loopy but genuinely appealing world of Santo and his crime-fighting sci-fi/horror adventures. Highly Recommended.