Man of the East

Man of the East (E poi lo chiamarono il magnifico, "And Then They Called Him Magnificent," 1972) is an instantly forgettable Spaghetti Western comedy. How forgettable, you ask? About five minutes into Kino's new Blu-ray, I realized not only had I seen it before, but already had a German Blu-ray that I'd watched only a few years before. The film stars Terence Hill, i.e., Mario Girotti, a blonde-haired, blue-eyed Italian-German actor, who had been appearing in Italian movies since he was a teenager, working in every genre. When sword-and-sandal movies were in vogue he appeared in those, and when the industry switched overnight to Westerns, he made Westerns, often as a kind of second-string Franco Nero.

Hill's career really took off, however, with They Call Me Trinity (1970), which teamed him with frequent co-star Bud Spencer. Straight spaghetti Westerns were in decline, but this comic one struck a chord with audiences and was hugely popular throughout Europe, prompting a sequel, Trinity Is Still My Name (1971), which for a while was the all-time top-grossing Italian movie. Not long after Hill also starred (with Henry Fonda) in My Name Is Nobody (1973), the best of this type of spaghetti Western, but in between Hill made Man of the East, a Le Pied-tendre ("Tenderfoot")-type shaggy dog tale. It's low comedy not far above the level of the Bowery Boys, but whereas Leo Gorcery and Huntz Hall would only subject their audiences to 65 or 70 minutes of their antics, Man of the East runs an excruciating 127 minutes. 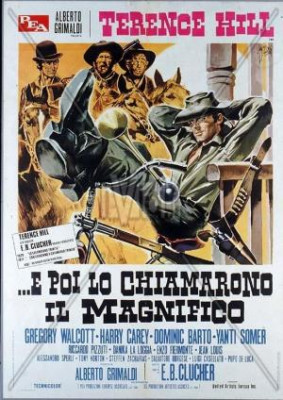 The film opens with long introductions of each of the main characters, spoofing or maybe just imitating the first 45 minutes or so of The Good, the Bad, and the Ugly. (The musical score by "Oliver Onions," actually Guido & Maurizio De Angelis, is imitative of Ennio Morricone's Western scores.) Bull (Gregory Walcott, of Plan 9 from Outer Space) pretends to be a mute working at a stagecoach station, and learns from two bounty hunters about the death of his old friend, "The Englishman," leader of a former Hole in the Wall-type gang; Holy Joe (Harry Carey, Jr.) is a sanctimonious grizzled preacher in a town of barflies, gamblers, and prostitutes; and Monkey (Dominic Barto) is in jail, but Bull and Holy Joe help him escape.

They learn of the arrival of British nobleman Sir Thomas "Tom" Fitzpatrick Phillip Moore (Hill), "The Englishman's" straight-laced son, a greenhorn visiting the American West for the first time. (The film frequently cuts away to footage of his long arrival, in aerial shots lifted from Support Your Local Gunfighter.) They all eventually meet up at the gang's old hideout in the mountains, not long after Money, Holy Joe, and Bull unsuccessfully robbed the stagecoach Tom was traveling in. In a letter to his old friends, Tom's late father asks the three aging outlaws to make a man out of his son. This turns out to be no easy task; for one thing, Tom would rather ride a bicycle than a horse, often while wearing a deerstalker hat. Cattleman Frank Olsen (which sounds like "Austin" in the English version) wants to buy up Tom's inherited land but he refuses. He does, however, fall in love with Olsen's beautiful and virginal daughter, Candida (Yanti Somer).

The long film is adequately produced but aimless, built around set pieces like a big scale saloon brawl that, while admirably inventive and executed by well-trained stuntmen, isn't nearly as hilarious as it seems to think it is. None of it is.

The film is moderately interesting for the presence of Walcott and especially Carey. Though forever saddled with his brief association with Ed Wood, the North Carolinian was a busy, capable actor throughout the 1950s through the ‘80s, occasionally in good films like The Sugarland Express and Norma Rae. He seems to be enjoying himself, which is something. Harry Carey Jr. was a longtime member of John Ford's stock company of actors, an association that led to almost constant work in the Western genre, everything from non-Ford films with John Wayne and others, and nearly every Western TV show of the ‘50s and ‘60s. By the 1970s his parts in feature films usually consisted of one short scene or two, whereas in Man of the East Carey is prominently featured throughout. One of the last survivors of that era of Western filmmaking (he died at 91 in 2012), Carey's was treasured presence. Man of the East is mostly poor, but genre fans can find some enjoyment in Carey's large, comical role.

Although filmed in two-perf Techniscope, Man of the East shouldn't look as muddy as it does. The image is adequate, but just barely so, with listless color and an overall image that never really pops like it should, relative to other late-period Techniscope Westerns. The DTS-HD Master Audio (mono) is likewise just okay. The film is offered only in English (on which Walcott's and Carey's own voices are heard) with optional English subtitles. Region "A" encoded.

Supplements consist of an audio commentary track by filmmaker and spaghetti Western fan Alex Cox, and a trailer.

The type of movie Variety reviews used to say was for "undiscriminating audiences," Man of the East is awfully tepid with obvious low-brow comedy that goes on forever. Far from Terence Hill's best work in the genre, it's for hardcore fans only. Rent It.