Kino // Unrated // April 27, 2021
List Price: $29.95 [Buy now and save at Amazon]
Review by Stuart Galbraith IV | posted March 18, 2021 | E-mail the Author
Released in 1964, The Time Travelers is an anomaly, a throwback to ‘50s-style sci-fi rather than something more resembling a sci-fi film from the mid-‘60s, produced on a modest (probably well under $250,000) budget, though infused with imagination and obvious enthusiastic effort throughout. Though poorly directed, it employs a grab-bag of cleverly executed trickery, predominantly magician's illusions adapted to the film's futuristic setting. Genre fans are understandably forgiving of pictures like this one: while the movie isn't exactly good, the obvious effort to create visually interesting vignettes holds more appeal than a cheap movie with more professional polish but uncaring and even contemptuous of its audience. 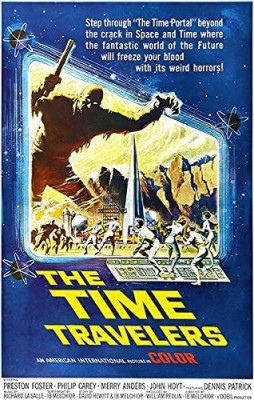 In the 1964-present day, university-funded scientists Dr. Steiner (Preston Foster), Dr. Steve Connors (Philip Carey), and Carol White (Merry Anders) are under pressure to produce results from their experimental time machine-like viewing monitor, with technician Danny McKee (Steve Franken) warning them the college plans to about to shut down all funding. In an act of desperation, Steve ramps up the power (or something) and the device, centered around a wall-sized monitor, begins to work, presenting images of a nearby parking lot two days in the past. Testing the viewer in future mode, they find the campus has turned into a desolate, post-apocalyptic landscape. Moreover, Danny realizes the monitor isn't just showing images of the future, but has somehow become a portal into the future, with Danny casually stepping into the image and wandering offscreen, out of sight.

Alarmed, the three scientists follow, hoping to retrieve him but now, in the year 2071, the portal back to the present vanishes, and the foursome are chased through barren terrain by radiated mutants. The time travelers find refuge in a nearby cave, and are rescued by the only "normal" humans left alive, a group of scientists (played by actors including John Hoyt, Joan Woodbury, and Dennis Patrick) nearly ready to abandon earth altogether, aboard a rocket ship bound for Alpha Centauri.

The Time Travelers was directed and co-written by Danish writer Ib Melchior, by all accounts a charming, imaginative man working on the fringes of the Hollywood film industry. He wrote or co-wrote low-budget movies and for television, often but not exclusively of a fantastic nature, sometimes adapting foreign-made product into an acceptable English-language version, his credits including an unmade American version of the first Godzilla sequel (called "The Volcano Monsters"), Reptilicus, Journey to the Seventh Planet, Robinson Crusoe on Mars, and Planet of the Vampires. As a director, he helmed the oddball "Cinemagic" film The Angry Red Planet (1959). In later years (he died in 2015 at 97) Melchior claimed producer Irwin Allen stole his concepts for the series Lost in Space and that Allen later ripped off The Time Travelers for The Time Tunnel (as well as an unsold TV-pilot, Time Travelers).

Imaginative though he was, as a director Melchior was all-thumbs. Both The Angry Red Planet and The Time Travelers are clumsily directed. In The Time Travelers especially, Melchior lingers too long on almost every shot in the picture, which could lose 15 minutes without actually eliminating any individual scenes. Though already short (about 80 minutes minus the credits), the stodgy pacing and unimaginative set-ups and rudimentary editing hurt the film. What's good about The Time Travelers is mostly the work of others: David L. Hewitt's sometimes effective magic tricks, the second-unit direction, Vilmos Zsigmond's colorful cinematography, etc.

The on-set magic harkens back to the early fantasies of Georges Méliès; some of it is pretty obviously a stage trick adapted for the film, like Danny's brief trip through a teleportation device but others are so well done the audience doesn't even notice it's there. One example of the latter is when a genetically modified orange tree in a "hydroponic garden" produces oranges in seconds (obviously little balloons) then one is passed via a technician to Steve who, within the same shot, peels and eats an obviously real orange. The uncredited technician (maybe Hewitt himself) cleverly palms the balloon orange, effortlessly passing a real one to actor Carey instead. It's a simple effect, but seamless.

The other tricks employed are sometimes very clever, such as replacing a "living" android's head and, once replaced, the android gets up and walks away, all without any cuts; others are merely pointless and instead of serving the story stop it dead in its tracks, such as Famous Monsters editor Forrest J. Ackerman's cameo as a technician who magically turns metal rings square for no clear reason.

The plot mostly reworks the tropes established in movies like Flight to Mars (1951) and Beyond the Time Barrier (1960), while incorporating bits from other films, like the When Worlds Collide-like signs counting down the days and hours until blast-off, urging workers to remain diligent. The science of the time-viewer borders on outrageous fantasy, but the conundrums of time travel are thoughtfully though not logically dramatized, including the unusual ending (mild spoilers), with the main characters seemingly caught in an endless time loop. (Amusingly, exteriors of the laboratory are the USC Doheny Library, home to the Film & Television Library and its archives.)

Hewitt's enthusiasm for the project apparently included other special effects in the film, including a modest but decent-looking miniature of the spaceship and launchpad that he personally built. His early promise was followed by a busy but disappointing career making directing films so appallingly bad as to be virtually unwatchable, including Dr. Terror's Gallery of Horrors (1967) and The Mighty Gorga (1969).

But The Time Travelers' everything-including-the-kitchen-sink approach is undeniably appealing. For such a cheap movie it offers several fairly elaborate sets, lots of costumed extras and built-from-scratch futuristic props and set pieces. The exterior locations are evocative and don't resemble those used again and again in other cheap sci-fi films: no Bronson Canyon, no Vasquez Rocks, etc.

Touting a new 2K transfer, The Time Travelers is presented in its original widescreen with what old-time reviewers used to call "fetching color." Dissolves and other optical effects are grainier and dirtier, possibly always so, but straight cuts reveal a lot more detail than the earlier DVD version. The DTS-HD Master Audio mono audio is acceptable and accompanied by optional English subtitles. Region "A" encoded.

The lone extra is a trailer, which amusingly confuses Steve Franken for Dennis Patrick. Neither actor could have been pleased.

This is the type of film that's likely to appeal only to hard-core sci-fi buffs, but for them this is a most welcome release and Highly Recommended.