Kino // Unrated // April 6, 2021
List Price: $49.95 [Buy now and save at Amazon]
Review by Stuart Galbraith IV | posted March 23, 2021 | E-mail the Author
Kino's back with another round of fair-to-middlin' Westerns, in this case all originally produced by Universal-International during the 1950s. Western Classics II consists of The Redhead from Wyoming (1953), Pillars of the Sky (1956), and Gun for a Coward (1957). None of them are bad; none are exceptionally good, but fairly decent meat-and-potatoes oaters. 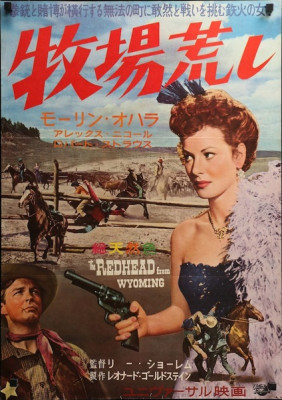 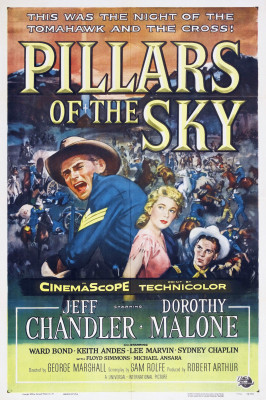 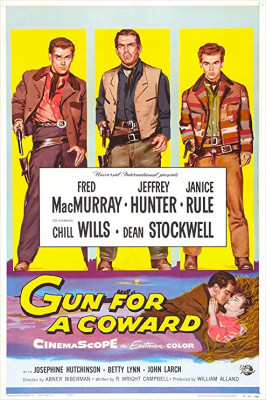 The Redhead from Wyoming (1953) is Maureen O'Hara, fresh from arguably her best film, made at the height of her beauty: John Ford's The Quiet Man (1952). Here she plays (American-accented) Kate Maxwell, star of the stage brought to Wyoming Territory by former lover Jim Averell (William Bishop), a shady gubernatorial candidate who sets Kate up with an all-expenses-paid saloon to manage, actually a front for Averell's cattle rustling scheme, his men stealing mavericks (stray, unbranded cattle) from rancher Reece Duncan (Alexander Scourby) while accusing settlers of the deed. Averell's plan is to start a range war to advance his political aspirations, while getting rich off the stolen mavericks, all with Kate's name on the paperwork, should his scheme backfire.

The movie seems to have been prompted by the huge success of MGM's film version of the Broadway hit Annie Get Your Gun (1950), starring Betty Hutton, which in turn prompted similar female-starring Westerns, including Warner Bros.'s Calamity Jane (also 1953), a virtual remake of MGM's film with Doris Day and different songs (but the same leading man). In both films the female protagonist was wild and uncultured, but a crack shot. Both films seem to think a woman couldn't be superior at "men's work" and be sexy and feminine at the same time, that she needed a man to domesticate her.

In The Redhead from Wyoming, the screenplay puts O'Hara in an even worse - certainly more confusing - position: this pentagonal conflict, of Averell and his gang using Kate against both ranchers and settlers while a drifter sheriff, Stan Blaine (Alex Nicol) mostly idly observes from the sidelines, makes Kate look like a fool for most of the film. Averell reveals his scheme to Kate early on, even admitting he's playing her for a sucker, the fall gal, so to speak, but she does nothing about it, resulting in a lot of dead cowboys by the final reel. She seems to still love Averell in spite of everything, while she's also attracted to circumspect Sheriff Blaine, who gives few signals he's even interested. All this is a shame considering the fiery, sharp-tongued Irish woman O'Hara was, in real life, somebody who probably could've made out just fine in the real West.

The lush Technicolor, not to mention O'Hara's bountiful bosom, on display to a degree that would've made Jane Russell blush, help some. The film also is of interest for all the up-and-coming talent soon to become major Western television stars in their own right: Dennis Weaver (Gunsmoke) as a hot-headed settler; Jack Kelly (Maverick) as Averell's tight-lipped henchman; and as a showgirl, future soap opera star Jeanne Cooper, who spent much of the ‘50s guest starring on Western TV series.

Pillars of the Sky (1956) is a workmanlike Western with religious overtones unexpectedly thrust front-and-center for the climax. Mostly, though, it's a slight variation of a familiar Western plot: a career Cavalry soldier respected by the local Indians is put to the test when a new superior officer, sometimes ambitious, sometimes racist and/or crazy but always with no Indian relations experience threatens to destroy years of carefully natured trust. John Ford's Fort Apache (1948) is the best example of such films, while Universal told essentially the same story in Seminole (1953); in both Seminole and Pillars of the Sky Lee Marvin plays a sympathetic career sergeant.

This time out the trusted liaison between the U.S. government and the Indians is First Sergeant Emmett Bell (Jeff Chandler) while the new superior is Col. Edson Stedlow (Willis Bouchey). He's ordered to build a government access road and fort through the middle of an Indian reservation in 1868 Oregon Territory, already too small for the many tribes there, igniting an Indian war led by Chief Kamiakin (Michael Ansara, no stranger to such roles). The large patrol under Stedlow's command is repeatedly attacked, their numbers whittled down to a mere handful of men as well as two women: Calla (Dorothy Malone), the estranged wife of Capt. Tom Gaxton (Keith Andes), she long in love with Bell; and Mrs. Avery (Olive Carey), the wife of a murdered prospector. Unlike most films of this type, it generates considerable suspense as it looks like everyone might just be killed.

Setting it apart from other Cavalry vs. Indians films, Pillars of the Sky pivots around a character played by Ward Bond, a preacher named Holden (one not far removed from his preacher character in The Searchers), trusted by most of the various Indian tribes, who has actively been converting them to peace-loving Christianity, baptizing them and giving them names drawn from the Bible. Bell himself starts out as a fallen Christian, whose father taught him to memorize the Bible, though he's lost his faith for unclear reasons, and surprised when Holden names him as his obvious successor. Just as everything appears hopeless, the climax turns on Holden's impulsive actions, and the Christianity vs. heathen conflict unexpectedly moves to the forefront.

Directed by George Marshall, Pillars of the Sky is handsomely produced in color and CinemaScope, with impressively big-scale battle scenes. It was based on cartoon writer-turned-Western novelist Henry Wilson Allen's 1953 story "To Follow a Flag," Allen's work adapted into sometimes good Western movies including The Tall Men (1955), Young Billy Young (1969) and others.

Though a strong sense of déjà vu permeates the film - besides almost remaking Seminole it features three actors late of The Searchers: Bond, Carey, and Walter Coy - the movie is just good enough to work reasonably well on its own. The "gift" of Christianity (and the names Bond's preacher bestows upon them) is, obviously, extremely condescending and presumptuous by today's standards, with Native American religions and cultures dismissed as "animal-like" according to the film, certainly uncivilized compared to the superior White Man's God. The climax, however, almost makes this hooey play. A quiet scene with Chandler, Bond, and Marvin also plays effectively, and all the more remarkable considering ultra-conservative and bigoted Bond reportedly hated both actors.

The psychological Western Gun for a Coward (1957) starts out well, thanks to an interesting screenplay by R. Wright Campbell, the brother of actor William Campbell, both of whom worked frequently with director Roger Corman during this time. The story unravels a bit in its second-half, but is mostly undone by its inapt casting.

Will Keough (Fred MacMurray) has been a father figure for his two younger brothers since the death of their rancher father following a rattlesnake bite. Middle-brother Bless (Jeffrey Hunter) is soft-spoken and under the thumb of his widowed mother (Josephine Hutchinson), who pressures Bless to move back with her to St. Louis, while youngest brother Hade (Dean Stockwell) is fearless, the opposite of Bless, even cocky. Keough appreciates the intense and unfair pressure his mother burdens Bless with, but is himself consumed with making his late father's dreams a reality.

Will is engaged to Audrey "Aud" Niven (Janice Rule), the daughter of another rancher, Andy Niven (Paul Birch), but she and Bless secretly love one another. The story heats up during a big cattle drive, with failed homesteader Stringer (John Larch), hired as a cowhand, bringing the latent tensions among the brothers to the surface.

The obvious problem with Gun for a Coward is MacMurray's age. He was 52 at the time but looks even older, and was less than five younger than Hutchinson, playing his mother but looking more like his wife. (She wears slight old-age makeup; without it, they would've looked the same age.) He was also 18 years older than Hunter, and nearly 30 years older than Stockwell. Though MacMurray's performance is fine, the age difference is a constant distraction.

Dean Stockwell, however, is outstanding in his first adult role (and first movie in six years). At that time, he bore a strong resemblance to James Dean, and is impressively physical throughout, leaping into saddle and such with the grace of earlier Western actors like Harry Carey Jr. and Ben Johnson in Rio Grande (1950). Jeffrey Hunter, meanwhile, seems to have been a capable actor when working under a strong director, but rather shrill in less capable hands, like Gun for a Coward's Abner Biberman. The character, as written, is required to be capable but psychologically scarred following a childhood incident, not a coward but non-violent by nature. Both Will and the screenplay suggest Bless just needs a little hardening up, to become a true man of the West that the West requires. Hunter, alas, just isn't up to the complexities of the character, at least not under Biberman's direction.

Produced by William Alland between his sci-fi pictures for Universal, the picture has a decent budget though Alland, enamored of cost-cutting stock footage during this period, can't resist using a lot of cattle drive stock shots that don't match the new footage well.

Two hits and a miss. Filmed in three-strip Technicolor for 1.37:1 standard aperture, The Redhead from Wyoming looks practically perfect, with rich, bright color and an impressively sharp and aligned image throughout. Pillars of the Sky, in color and CinemaScope, also appears impressively sharp for a relatively early ‘scope title, and it's color also holds up well. Disappointingly, Gun for a Coward suffers from what's fast becoming an epidemic among HD transfers of classic movies: it's way, way too dark. One look at the trailer, included on the disc (each film gets its own disc and slipcase), drives home this point. The trailer (though recropped for 1.85:1 widescreen) is bright and clear, interiors and exteriors lit like other ‘50s CinemaScope movies. But the transfer of the feature itself presents mid-day exteriors as if it were nightfall, and nighttime scenes so dark much detail is lost and one has to squint to see what's going on. My guess is that those supervising such transfers are misguidedly trying to make older movies resemble contemporary ones, rather than how they appeared to 1950s audiences, when soundstage lighting was brighter and day-for-night was commonplace. That Gun for a Coward is further hampered by grainy opticals, dirt and other imperfections make this an unusually disappointing film transfer. The DTS-HD Master Audio, mono for all three, is acceptable. English subtitles are provided on these Region "A" discs.

Supplements consist of trailers and audio commentaries on each disc: Samm Deighan on Redhead, Toby Roan on Pillars, and Lee Gambin and actress Rutanya Alda on Coward.

Though none are memorable, Western fans will enjoy these films, though like me they may be disappointed by the too-dark video transfer on Gun for a Coward. Overall though, Recommended.