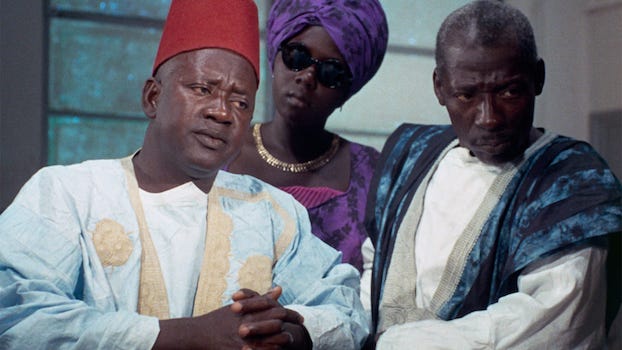 It's odd. I cannot think of many films that make me as anxious as Ousmane Sembène's second feature, Mandabi (1968). And this is likely not the reaction of most viewers. The film is a darkly comic look at what happens to a poor Senegalese man who is entrusted with a postal money order (the titular mandabi) by his nephew who has been working as a street sweeper in France. News of the money order travels quickly through the poor village where the man, Ibrahima Dieng (Makhouredia Gueye), lives with his two wives and seven children. Soon, everyone is hoping to do business, settles debts, or receive a handout from this newly acquired wealth.

"A fool and his money are soon parted," goes the saying, and somewhat inevitably the only reason that Sembène puts Dieng in charge of this money order is so that he will be even poorer than he already is at the film's end. Something about that idea makes me fidget and squirm more intensely than anything in Uncut Gems. Granted, there is a slight kinship between Adam Sandler's Uncut character and Dieng, in that they both are show-off know-it-alls who know far less about the workings of the world than they think. But Dieng's pride and self-interest is far from the main source of his downfall; pointedly, the broken systems of "modern" Senegal are his true undoing.

Dieng needs an ID to retrieve the money order, but the wannabe big shot -- who, at this point in time, would have been around at least fifty years longer than the independent Republic of Senegal -- has never bothered to get one. Traveling largely on foot, the illiterate Dieng loses days trying to get an ID, seeking help at government offices, whose dead-eyed paper pushers ask for documents that he must retrieve from yet more offices. Acquaintances offer assistance along the way -- for a price -- and every offer should raise Dieng's suspicions, but it rarely does. At one point, he borrows money to get a photo taken for the ID, but the photographer merely pretends to take the snapshot. The transaction eventually ends with a fistfight that leaves Dieng with a bloody nose, a 300-franc debt to his friend, and no photo.

As tough as it was for me to watch this character run through this capitalist gauntlet, there are many aspects of Mandabi that kept me hooked into the film. Sembène's ability to capture the flow of life in Dakar -- whether in Dieng's shantytown or the big city centers -- not only informs his protagonist's dilemma but provides a transportive time capsule. Sembène worked largely with nonprofessional actors -- for better and worse -- but his lead, Makhouredia Gueye, was a theater actor who brings disarming layers to his portrayal of Dieng. Early in the film, DIeng is almost strictly a clown, but by the film's end, he is not only tragic, he is a three-dimensional human.

Mandabi was groundbreaking, as the first film made by an African filmmaker in an African language (Wolof, although many of the sellout middle-class characters speak in French). Sembène designed the film to reach the average moviegoer in Senegal, and to address the way capitalism and neocolonialism was wrecking the young republic; therefore, the film ends on an ambivalent, though decidedly activist note. Some viewers might be put off by the sudden spelling out of the film's themes, but I found it made the ending more resonant and helped me to set aside my reservations about the tangle of events that had preceded it. 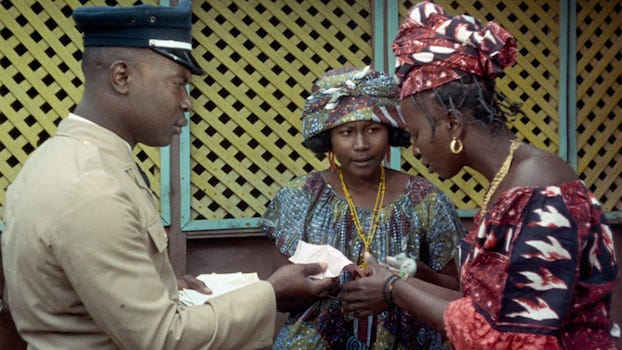 The Blu-ray
Mandabi is packaged with a leaflet featuring an essay by Tiana Reid and excerpts from a 1969 interview with Ousmane Sembène. Also included is a chapbook-sized reprint of Sembène's novella The Money Order, which was the basis for the film.

The Video:
The first time I saw Mandabi was on New Yorker's muddy-looking DVD, and compared to this new restoration, it is night and day. The AVC-encoded 1080p 1.66:1 presentation offers excellent detail, rich colors, and a satisfying grainy appearance that speaks to the image's origin on 16mm film, but is not overwhelmed by the limits of the format. Dirt and damage is pretty well cleaned up, and the image is stable throughout.

The Audio:
Age- and budget-based limitations are a little more apparent on the Wolof (with some French) LPCM mono soundtrack (offered with optional English subtitles). Sometimes the track sounds thin and ALMOST distorted, but these rough edges have been smoothed out enough that viewers will likely notice, but be unperturbed, by these lo-fi flaws.

(HD, 29:46) - Film scholar Sanogo offers an energetic and thorough discussion of the politics and style of Mandabi, as well as its place within Sembène's filmography.

Final Thoughts:
This is a gorgeous restoration of Ousmane Sembène's second feature. Technically, this is leaps and bounds better than the old R1 DVD. The supplemental materials expound upon the themes and context of the film brilliantly, while also offering a necessary appreciation of Sembène as a filmmaker. The whole package comes Highly Recommended. 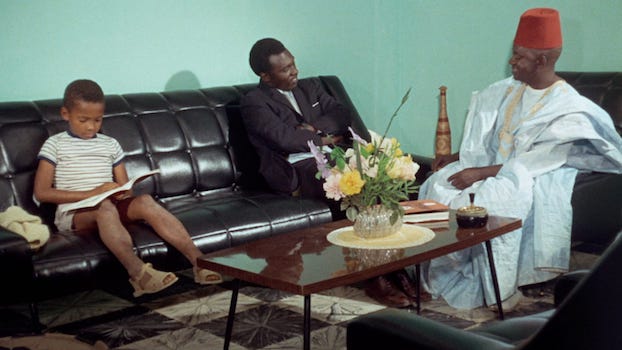