Captain Newman, M.D. (1963) is much better than you might expect it be; I expected some mawkish military melodrama laced with obvious, broad comedy relief. In a way those things are there, but the intelligent screenplay (by Richard L. Breen and Phoebe & Henry Ephron, from Leo Rosten's novel), even better acting, and an impressively authentic depiction of mental illness among soldiers fresh from battle make this one a winner all the way.

Originally released to DVD as part of Universal's The Gregory Peck Collection from November 2008, Captain Newman arrives on Blu-ray via Kino. 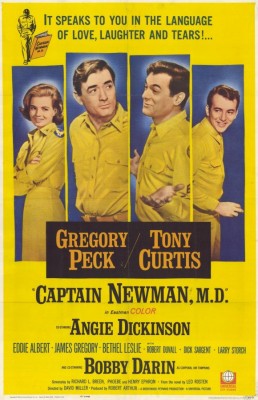 In 1944, Capt. Josiah "Joe" Newman, M.D. (Gregory Peck) runs a psychiatric ward that's part of a larger Army Air Corps hospital in the Arizona desert. As mental illnesses like post-traumatic stress were only beginning to be understood, Newman faces much resistance from the Army brass, particularly autocratic Col. Pyser (James Gregory, in his familiar pompous persona). In clumsy yet effective exposition, Newman introduces the ward to Pentagon liaison Lt. Alderson (Dick Sargent) and, by extension, the audience. Not long after, Newman compels Cpl. Jackson Leibowitz (Tony Curtis) and nurse Lt. Francie Corum (Angie Dickinson) into working at the understaffed ward.

Patients include Col. Norval Bliss (Eddie Albert), a highly intelligent man so resistant to Newman's treatment that he completely breaks with reality, adopting the identity of "Col. Future" and refusing any discussion of "Col. Past." Left alone in his room he incessantly rattles off orders at a machine-gun pace. Newman begins recording Bliss's rants hoping to decipher them.

Capt. Paul Winston (Robert Duvall, also in Peck's To Kill a Mockingbird the previous year) is a catatonic soldier who, after being shot down behind enemy lines, spent 13 months hiding in a basement until finally rescued.

Lastly, Cpl. Jim Tompkins (Bobby Darin) is combative and drinks heavily, (mild spoilers) the result of having survived a horrific plane crash. Under Sodium Pentothal (called "Flak Juice" by the patients) Jim is able to purge some of this horrible guilt.

One wonders if Gregory Peck consulted with director John Huston (who directed Peck in 1956's Moby Dick) while Captain Newman, M.D. was being developed or perhaps in its early stages of production. Huston had made a controversial film called Let There Be Light (1946), a documentary following cases quite similar to those in Captain Newman, M.D., severely mentally ill soldiers at a military hospital. It was so unnerving and starkly honest that the U.S. military banned its distribution for more than 30 years. One of the patients, an African-American who has lost the ability to speak, is nearly identical to a patient in Huston's film.

Captain Newman, M.D. plays like a mainstream dramatic adaptation of Huston's film. Some of the most disturbing symptoms admittedly have been toned down for movie audiences, but otherwise they're very realistically portrayed and must have made 1963 audiences squirm in their seats with discomfort. Even by this time mental illness, especially mental illness in the military, was all but taboo.

Singer Bobby Darin earned an Academy Award nomination for his performance (he lost to Melvyn Douglas) and despite his background as a singer he's actually fine. Indeed, he really bares his soul during the Sodium Pentothal sequence - so much so that during his throes of anguish Darin's toupee is visibly dislodged. The filming of that scene was later recreated for Beyond the Sea (2004), the Bobby Darin biopic starring Kevin Spacey.*

Even better though is Eddie Albert as Bliss. Before Green Acres Albert, a real-life war hero awarded the Bronze Star (for rescuing 47 Marines under heavy enemy machine gun fire), was probably best known for his military roles. He brings obvious verisimilitude to the part but was also such a fine actor that his character's personality shifts are genuinely disturbing.

Captain Newman is an almost perfect role for Peck. He projects intelligence and understated authority quite well, and both the part and film hinge on his reactions to his patients' often bizarre and inexplicable behavior. He was one of the best listeners in the business.

At 38 but playing a decade younger, Tony Curtis is really too old to be believed as a brash young corporal who thinks he knows more about medicine than his commanding officer. But he's there for comedy relief, Curtis is up to the task, it's not too intrusive, and Peck and Curtis are genuinely amusing in their scenes together. Late in the film, animated, versatile character actor Vito Scotti turns up as the spokesman for a group of Italian POWs. He's quite funny and brings out the best in Curtis, too.

David Miller directed. He'd been around since the 1930s, eventually working his way up to A-level productions. He'd just come off Universal's acclaimed modern Western starring Kirk Douglas, Lonely Are the Brave (1962), and proved a good match with both Peck on the material, apparently a real actors' director. Not long after Miller and Peck reunited for a World War I action-thriller called The Bells of Hell Go Ting-a-ling-a-ling, co-starring Ian McKellen with a screenplay by Roald Dahl. The movie was in production for five weeks in Switzerland but abruptly abandoned, supposedly due to bad weather. He never worked with Peck again, but near the end of his career made the fascinating Executive Action (1973), a conspiracy film about the John F. Kennedy assassination with a script by Dalton Trumbo.

Filmed for 1.85:1 projection, Captain Newman, M.D. mostly looks great. The image is notably sharp and the color good. Scattered moments here and there, sometimes but not always on either side of dissolves or other opticals, are significantly grainier, but overall this is a bright, impressive transfer. The DTS-HD Master Audio (mono) is also good, and optional English subtitles are provided on this region "A" encoded disc.

Supplements are limited to an audio commentary track by Samm Deighan and a trailer.

A very pleasant surprise, Captain Newman, M.D. is like an excellent TV-movie (before TV-movies were commonplace). Directed by David Miller with an emphasis on the performances rather than visual flair, it's nevertheless a classy, intelligent A-picture and Highly Recommended.

* Coincidentally, Bethel Leslie, who plays Duvall's wife, was later nominated for a Tony for her 1986 performance as Mary in Long Day's Journey into Night, a revival that helped established the actor playing Jamie: Kevin Spacey.