Lovely Way to Die, A

A neo-noir with good points and bad ones, A Lovely Way to Die (1968) has the basic components of a decent crime thriller but never once do these varied qualities gel. Writer A.J. Russell had a fairly schizophrenic career, first in early television anthologies like Studio One and Lights Out before switching to comedy, including both The Honeymooners and The Phil Silvers Show. He then switched back to drama for a time, eventually creating The Bold Ones: The Senator, and long after that was a story consultant on the soap opera General Hospital.

One of the many odd things about A Lovely Way to Die is that Russell seems to be trying to give the film a Billy Wilder-esque black comic tone, the kind of thing Wilder did so well in movies like Double Indemnity and Sunset Blvd., but those efforts are so poorly done here that they're almost invisible. What isn't invisible is Kenyon Hopkins's appallingly inapt score, which bludgeons the movie audience with grating cues signaling where the laughs are supposed to be. Around this time Hopkins became head of the music department at Paramount Television, and his score for A Lovely Way to Die has much the same tone as his music for The Brady Bunch. Vic Mizzy's music for Don Knotts comedies had more subtlety.

Nevertheless, the picture isn't quite as bad as its reputation, and many critics both then and now seem confused about what works and what doesn't. 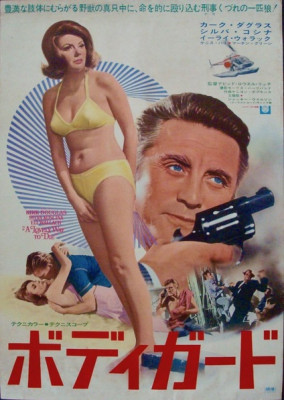 The movie opens with a title song, performed by Jackie Wilson and played over footage composed of scenes from the movie the audience has not yet seen. A weird concept, that. Kirk Douglas stars as a proto-Dirty Harry New York police detective, Jim "Skye" Schuyler, who turns in his badge after years of complaints of his brutal tactics, Skye scoffing at the rights of the accused. Also, in introducing the character, we see inveterate womanizer Skye love-and-leave a parade of beautiful women, including Marianne McAndrew and Ali McGraw, both uncredited, the latter making her film debut.

The basic plot is a noir chestnut: Ex-cop is hired by a shady lawyer to protect an exotically beautiful woman accused of murdering her rich husband. The wife in this case is Rena Westabrook (Sylva Koscina) and the lawyer is "Tennessee" Fredericks (Eli Wallach). Rena is anything but a grieving widow, and quite open about her affair with playboy neighbor Jonathan Fleming (Kenneth Haigh), though her husband was also fooling around with the housemaid (Sharon Farrell) shortly before his murder. Nevertheless, everyone, including Skye, assumes Rena is guilty.

However, there are strange aspects to the case, including the activities at a nearby mansion, occupied by reclusive Englishman Finchley (Martyn Green), whose confederates mysteriously keep a body in cold storage.

Surprisingly, one of the best things about A Lovely Way to Die is the direction by David Lowell Rich, best remembered for helming innumerable TV-movies, a task he seemingly alternated with John Llewellyn Moxey throughout the 1970s especially. Here, Rich keeps things moving at, by 1968 standards, an almost breathless pace, and his Techniscope compositions (with cinematographer Morris Hantzband) are often striking and the editing Rich supervised is also good, if ultimately for naught. Rich also photographs femme fatale Sylva Koscina, the gorgeous Yugoslavia-born Italian actress best-known for the Steve Reeves Hercules and its sequel, to good effect. The movie may be lousy, but Rich keeps at least the male-half of the audience wide awake with Koscina constantly slipping in and out of something more comfortable.

Conversely, while many critics of the time (including Roger Ebert) liked Eli Wallach's good ol' boy country lawyer, I found the very Brooklyn-born Wallach wildly unbelievable, his southern accent particularly phony. Partly the script is to blame: when famed Gilbert & Sullivan performer-director Martyn Green turns up in a rare film role as Finchley, I initially thought he was an American actor speaking with a phony English accent, rather than a genuinely English actor trying to deliver the type of ludicrous dialogue American writers often provide English characters (one almost expects "Pip, pip--cheerio!"). Ultimately, though, none of the characters are believable anyway, as they're all noir types never fleshed-out into anything interesting.

Universal opted to shoot a lot of its late-‘60s/early-‘70s features in cost-saving Techniscope, hence its appearance here. The video transfer is sharp and bright with decent color, showing the format to best advantage. The DTS-HD Master Audio (mono) is fine for what it is. Optional English subtitles are provided on this region "A" encoded disc.

Supplements are limited to an audio commentary track by Howard S. Berger and Steve Mitchell; and two trailers, one each for the domestic and international markets.

A swing and a miss, A Lovely Way to Die has good points (Rich's direction, Koscina's sex appeal, good cinematography) outweighed by bad ones (the musical score, Wallach's hammy performance, etc.), especially its screenplay, which can't settle on a consistent or even recognizable tone and which is populated by uninteresting, two-dimensional characters. Rent It.