I confess a fascination with German-made Westerns. Their production peaked during the 1960s, when big-budget adaptations of German author Karl May's Western novels were huge hits at the box-office there. Unlike the gritty, grimy, and cynical Spaghetti Westerns concurrently produced or co-produced out of Italy, the Westerns from West Germany (and, to a lesser degree, East Germany) were more classical in style, more like Hollywood Westerns of the ‘40s, romanticized though incorporating singularly German interests and characters.

The Kaiser of California (Der Kaiser von Kalifornien, titled The Emperor of California in the English subtitles) is a 1936 film, making it the first movie Western offering under Nazi Germany. It jibes with the party's political views in some respects, but probably that's mostly coincidental. It's as much a biographical drama as a Western, as it traces the fall, rise, and fall of Swiss-German Johann Sutter, he of the game-changing gold strike at Sutter's Mill. Filmed on location throughout the American Southwest, it's a real curiosity: an epic Western told from a unique perspective. 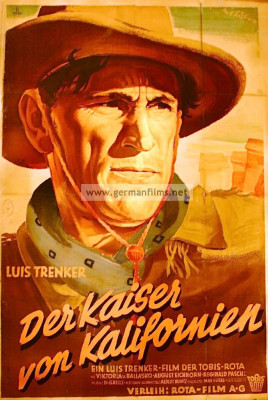 Facing arrest for publishing anti-Napoleonic pamphlets, Sutter (Luis Trenker, who also directed and wrote the screenplay) flees his Burgdorf, Switzerland print shop, leaving behind his wife, Anna (Viktoria von Ballasko), and their two toddler sons (Sutter actually had five) for a ship bound for America. The movie mostly accurately traces his movements through St. Louis, Santa Fe, and across the Oregon Trail, Sutter eventually settling in Alta California as the leader of a large contingent of German immigrants, convincing the governor to conditionally grant him nearly 50,000 acres to cultivate.

As the film's title suggest, Sutter does indeed become a kind of Emperor at Sutter's Fort, New Helvetia, pushing the other Germans to the brink with hard word in order to realize his vision of a thriving, self-made and sustainable paradise for his people. The accidental discovery of gold at Sutter's Mill by employee James Marshall (Reinhold Pasch) horrifies Sutter, who immediately realizes that an ensuing gold rush and the inevitable greed that accompanies it will bring ruin to all his long-term plans for the community.

South Tyrolean actor Trenker was a mountain climber and architect who entered films by accident, replacing the lead actor of a 1921 Arnold Fanck mountain film when the original star couldn't or refused to perform the movie's climbing stunts. By the late 1920s Trenker was taking on additional roles in his "mountain" films, eventually producing, directing, and writing as well as starring in them. His previous film, The Prodigal Son (1934), about a South Tyrolean immigrant, was also filmed in the U.S., primarily New York City. The Kaiser of California and that earlier film, partly financed by Universal in the U.S. and featuring Hollywood star Marian Marsh, are apparently the only Nazi-era movies filmed on location in America.

The Kaiser of California was mostly shot in an around Sedona, Arizona, at Death Valley, and even the Grand Canyon, where Trenker shows off his mountaineering skills a bit, a nod to his screen persona. The black-and-white cinematography, credited to Albert Benitz and Heinz von Jaworsky is often striking, at times anticipating John Ford's later Stagecoach (there's a similar use of clouds hovering over the large landscapes) but also German propaganda films like Olympia, which Jaworsky helped photograph. It idealizes the pioneer spirit of working the land -- shots of rows of farmers manually harvesting wheat with huge sickles stands out -- but this was also common to Hollywood films dramatizing settlers in the old West and hardly limited to fascist filmmakers. One assumes most of the interiors were done on soundstages in Germany, but what about the epic scenes near the end, featuring no less than the burning of San Francisco? Were those backlot-type sets constructed in the U.S., or in Germany?

The film looks quite expensive by 1936 standards, perhaps costing the equivalent of, say, between $500,000 and $1 million. Lots of elaborate sets, costumes, and extras, though a couple of shots, such as a wide angle of a huge wagon train, may have been stock footage from an American film Trenker acquired while in the U.S. (In the film, only three or so wagons are within the frame at any one time.) The picture looks very polished most of the time, but the remote locations and their distance from one another, combined with the all-German cast and crew, may have meant that Trenker could only rarely look at dailies. That would account for a number of goofs left in the film, including several out-of-focus shots, some dodgy hand-held camerawork (particularly the Grand Canyon footage) and, in one shot at about the 22-minute mark, a highly visible automobile seen driving in the distance.

The film is entirely in German, which makes sense, almost, since Sutter is among fellow German (and Swiss) immigrants most of the time. The only English spoken are a few lines when Sutter and his companions encounter Native Americans, presumably played by real, English-speaking ones while out on location. In these scenes film seems inspired by the Karl May novels with their sympathetic portrayals (many decades ahead of most Hollywood films), especially the noble Winnetou, the central figure of May's imagined Western universe. In reality, the historical Sutter treated Indians as sub-human, keeping around 700 as slaves and even feeding them scraps via pig troughs, the kind of treatment that, nowadays, gets one statue removed from the town square.

Trenker himself makes for a distinctly German Western hero: he looks more like Victor Jory than John Wayne, more a villain than a hero. Like that other mountain-climbing actor-turned-director, Leni Riefenstahl, Trenker was seemingly immortal, remaining in good health until shortly before his death in 1990 at 97. Unlike the controversial Reifenstahl, Trenker actively avoided Nazi meddling of his work, Trenker moving to Rome in 1940 and, for a while, switching to travelogue-type documentaries. He worked steadily in films during the ‘50s and ‘60s, and continued directing films as late as 1979, and as an actor until at least 1982.

Sourcing a 2K restoration of the film done by the Murnau group in Germany, The Kaiser of California is presented in its original 1.33:1 aspect ratio. The film looks great about 97% of the time, with only a few fleeting instances of resorting to secondary elements. Otherwise, it's as good as the best Blu-ray presentations of black-and-white Hollywood movies from the mid-‘30s also in black-and-white. The optional English subtitles appear to have been created in Germany; they're good, but a wee bit eccentric in their wording here and there. The LPCM mono is likewise fine. Region "A" encoded.

The lone supplement, easy to mix as one can access it only through the "Set-Up" option, is an audio commentary by film historian Eddy Von Mueller.

As Westerns go, The Kaiser of California is good, not great, but the nature of the film and its unique production and perspective keep it fascinating throughout, and the video transfer is excellent. Highly Recommended.