The good people at 3-D Film Archive hit another one out of the park with Dynasty (1977), a deliriously over-the-top kung fu epic not only restored to its original 3-D glory, but also presented in a new DTS-HD 5.1 mix adaptation of the release version's 4.0 Quadrophonic sound. Further, the disc is crammed with special features that, all by themselves, make this a highly desirable disc. It's yet another example of the exceptional restoration and value-added work 3-D Film Archive reliably does despite tight budgets; rights holders of 3-D titles really should be outsourcing and/or licensing more library titles their way. 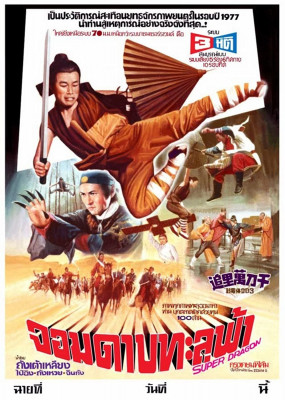 A Taiwanese-Hong Kong co-production originally released as Qian dao wan li zhu and alternatively known in English as Super Dragon, Warlord and possibly other titles, Dynasty is sleight of plot and populated with cardboard stock characters typical of the genre, but the near-constant action is staged well and the 3-D and stereo surround add enormously to the fun. Even without the 3-D and stereo sound it's above-average for this kind of film.

After framing loyal Prince Chu and turning the Emperor against him, Chao (Ying Bai), leader of a band of eunuchs (?), murders his way through China (though the movie was, apparently, shot entirely in Taiwan), eventually tracking the prince to a vast Buddhist temple. Elsewhere, Tan Hsiao-chien (Tao-Liang Tan, aka Bobby Ming)*, five years into his kung fu training following Chao's murder of his family, vows to avenge their deaths. The equally well-trained monks at the temple believe only he has the chops to kill the nearly impervious, wizard-like Chao, made vulnerable for just seven days following a brain injury (!) in combat.

Chao, meanwhile, is approached by the Eve Harrington-like Lang Si-yu (David Wei Tang), a handsome, cultured kung fu master who only wants to serve Chao -- or is he conspiring to kill him and take over himself? Si-yu insists Chao's generals are idiots, at one point claiming to have "twice as many brains" as those guys, all the while manipulating Chao's minions into one foul-up after another, with Si-yu calmly observing from the sidelines.

What plot there is, however, matters not in the slightest. Where the film delivers is in its non-stop action set pieces, comprising probably 80 minutes of the film's 92-minute running time. There's not even time for any romance; other than a few background extras, the movie is bereft of women.

I was expecting something like a martial arts version of Comin' at Ya! (1981), the 3-D spaghetti Western that kick-started the 1980s 3-D revival. That film's impressive 3-D effects eventually become tiresome, with no stone untossed at the camera. Instead, Dynasty retains all the balletic stunt work, editing and camera framing of an above-average martial arts film, while simultaneously maximizing the 3-D. Yes, spears, arrows, and even the hanging beam used to ring a bonsho bell are thrust into the camera lens but generally the staging is more in the style of ‘50s 3-D Westerns and the like, rather than the later, ‘80s revival titles.

Further, the martial arts genre's conventions, combined with all the attractive, traditional Chinese architecture gardens and the like, make this a special treat in 3-D. The climax, the inevitable three-way bout among the leads illogically begins at Chao's palace before instantly shifting high in the mountains, surely many hours' travel, yet the location is strikingly beautiful and looks terrific in three dimensions.

Seeing all this outlandish action and cartoon-level gore is quite fun. So what if there's barely a story? In one combat set-piece, a villain's hands are chopped off, but the "It's-only-a-flesh- wound" baddie soldiers on anyway, the fight continuing for several more minutes. In another, the bad guys fling Metaluna Mutant-like claws on long chains, decapitating many of the fighting monks, with everything flying toward and away the camera lens. The Quadrophonic sounds also adds immeasurably to the overall impact. The villains are often on horseback, their thundering hoofs first heard faintly in the front speakers before overwhelming the surrounds (while the dust they kick up lingers suspended in front of the movie screen). In theaters it must have been deafening. The sound effects one associates with the genre take on an almost avant-garde industrial quality in stereo surround. It reminded me of some of Spike Jones's later experimental recordings.

Dynasty was filmed in a process called Super-Touch 3-D (later called Optimax III), an "over-and-under" single camera process similar to the more familiar Space-Vision but compatible with a much wider range of 35mm cameras. The downside was that it was almost perversely complex in design, and ultimately used on just six feature films to date. The 3-D Film Archive had their work cut out for them. Their restoration of the 2.35:1 ‘scope image offers better-aligned 3-D which, 99% of the time, looks great, though disclaimers warn some problems were "burned in" to the original camera- and print-work, most noticeable in the form of black splotches on one "eye" during most of the climax. No amount of computer color correction could bring this title back to its original hues, but overall this looks no worse and often much better than other chop-socky titles on DVD and Blu-ray. The 3-D and stereo surround more than make up for these shortcomings. Undoubtedly aware of the many genre fans without a 3-D Blu-ray set-up, they've included an anaglyphic version as well, along with one pair of red-blue glasses (more can be ordered). That process works great with 3-D comic books but is terrible with color movies, though it's a nice gesture. The DTS-HD Master Audio remix is impressive, with all kinds of directionality and oomph while still sounding a lot like a typical ‘70s martial arts movie. Many such films shamelessly stole music from other movies -- the scores of John Barry seemed a particular favorite -- which had me wondering if this was original music or cribbed from other movies where stereophonic soundtrack LPs were available. The film is presented in its English-dubbed version only; optional English subtitles are included. Region "A" encoded.

Supplements begin with a superb featurette on the Super-Touch system by 3-D expert Mike Ballew. Loaded with intriguing photos and graphics, Ballew explains how the system worked and its history, striking an ideal balance between making it understandable for the layman while at the same time going into enormous technical detail. The House of Terror is a restored complete issue of 1953 3-D horror comic book, reconfigured to Blu-ray 3-D rather than anaglyphic. The images really pop, though even on my projection system and big screen I found some panels a bit too small to comfortably read. Go Away I Like You Too Much is an entirely CGI 3-D animated music video from The Simple Carnival; a trifle, but cute for what it is.

On the other hand, two color and 3-D stereo slide presentations are worth the price of the disc all by themselves. "Sold on Stereo: Commercial 3D in the 1950s" looks at 3-D marketing by big and mid-sized companies, from car manufacturers to undertakers, using 3-D slides and viewers to hawk their wares, while "Inside a Mid-century Department Store" documents every floor of the massive Titche-Goettinger Department Store in Dallas, Texas. Not only do all these color slides look stupendous, they act like a portal to another time. The items displayed, from new model Corvettes to ladies' corsets offer unique glimpses into life in the fabulous fifties. As with Hillary Hess's similar presentation of 3-D slides on an earlier 3-D Film Archive release, this material is almost too good to merely support a feature presentation. It may not be a commercially viable option for the Archive, but I'd be first in line to snap up a release devoted entirely to this type of material.

One of the year's best releases thus far, Dynasty is a must in Blu-ray 3-D and a DVD Talk Collectors Series title.

* I'm not certain of the actor's name, nor that of his character, but his face rings a bell. Literally.