History is Made at Night (Criterion Collection)

Charming beyond words, History Is Made at Night (1937) is a prime example of the type of lushly romantic fantasy Hollywood used to make but doesn't anymore. On the surface, its set-up and situations are ludicrous. Here, the estranged wife of an insanely jealous millionaire shipping magnate in a single evening falls madly in love with a celebrated head waiter, a situation finally resolved on a literarily Titanic scale, a spectacular maritime disaster.

Yet, History Is Made at Night is deeply affecting if you can let its magic work on you. That's because, no matter how improbable its plot, its core emotions are absolutely genuine. Indeed, these types of films feel very deeply and honestly, in some ways more so than serious drama. Director Frank Borzage and stars Jean Arthur and Charles Boyer understood this. Arthur, as she almost always was, is luminous.

The film, originally released by United Artists, was one of the earliest to be shown on commercial television, where it gained a new generation of admirers. In recent years, however, the film has been fairly difficult to see, the only previously home video version being a VHS tape released by Warner Home Video in 1993. Criterion's new Blu-ray is an impressive restoration. 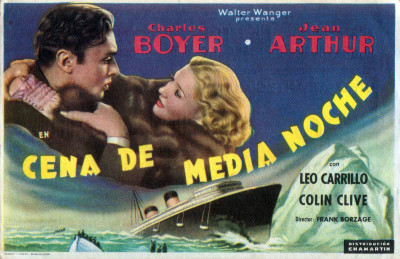 Irene Vail (Arthur) has left her shipping magnate husband, Bruce (Colin Clive, in his penultimate film), he driving her away with his insane jealously, wrongly convinced she's been having multiple affairs. Determined to prevent their divorce from being finalized, he bribes their chauffeur, Michael (Ivan Lebedeff), to enter Irene's Paris hotel suite and take her in his arms so that Bruce and a private detective (Lucien Prival) can catch Irene in a damning compromising position.

However, in the suite next-door, Paul Dumond (Boyer) overhears Irene's pleas to Michael not to go through with the deception, and as Bruce and the detective burst-in, Paul pretends to be a burglar intent on stealing Irene's priceless jewels. After knocking out Michael and locking the other men in a closet, Paul "kidnaps" the understandably confused Irene.

Even more perplexing, he whisks her to the just-closed Château Bleu restaurant, where Paul convinces the orchestra and celebrated chef Cesare (Leo Carrillo) to reopen just for them. Charmed by Paul, Irene falls in love as they dance the night away. Meanwhile, Bruce murders Michael with a poker, and when Irene returns home she finds police investigating a crime Bruce uses to blackmail Irene. Rightly guessing (for once) that Irene is in love with Paul, Bruce compels Irene to return with him to America as his dutiful wife to spare Paul from the guillotine.

Paul, at first unaware of the murder and blackmail plot, to say nothing of Irene's identity, with Cesare follows her to America. There he muscles his way into a struggling but swanky Manhattan nightspot, he and Cesare taking over as head waiter and chef, Paul certain that someday Irene will find him there.

To the uninitiated, History Is Made at Night is a surprising fusing of several genres: romantic comedy, romantic melodrama, suspense thriller; it's even a disaster film. Two disasters, in a sense. One scene has Bruce booking passage eastbound aboard the Hindenburg, the filmmakers not realizing the celebrated airship would meet with its own, real-life disaster barely two months into the film's release.

Charles Boyer had been alternating between French and Hollywood films since the beginning of the decade, but under contract to producer Walter Wanger he became a big Hollywood star. He is requisitely charming here, but it's Jean Arthur who dominates the film, even though the screenplay pretty evenly divides their screentime. Unique among stars of her era, Arthur was attractive but not glamorous and even awkward and befuddled. In this film, she identifies herself as from Kansas; in most of her films of this type her characters hail from similarly unpretentious places. She had a great, unique speaking voice, usually described as "throaty" but that's not quite it. Whatever it is, it's sensitive, even delicate, and vulnerable. Listening to her dialogue here I found myself wondering: Did Arthur adjust her lines slightly to suit her screen persona and character, or through performance alone does she manipulate the dialogue to so perfectly match her? We learn later Paul's attraction to Irene began with her nonplussed reactions to this strange mystery man. Irene/Arthur can only repeatedly say, "Oh," yet Arthur somehow turns this into gold. Paul falls in love with her and so, too, does the audience. Since retiring from the screen for good in 1953, other actresses have reminded viewers of Arthur's type -- Blythe Danner and Mary Steenburgen to name two -- but none have quite matched her great charm and underrated acting chops.

As outrageous as its story is, the screenplay is admirably unpredictable. Paul is a complete mystery in the early scenes, allowing the audience to wonder along with Irene just what his intentions are. Is he a gentleman thief? A rich playboy? Other story elements that at first seem problematic are neatly resolved later on, and the Titanic-like climax generates real suspense: surely, they're not going to let everybody die? First-time viewers will be on the edges of their seats until the film's final moments.

The film had, by 1937 standards, a large budget, about $820,000, and the special effects, credited to art director James Basevi, are good but not great, though a large-scale miniature of the doomed ship is impressive. But Borzage certainly captures the growing panic well, scenes as quietly intense as anything in A Night to Remember and more emotionally believable than anything in the James Cameron Titanic.

Borzage was a master at changing gears, from lush romance to screwball humor to serious drama with life or death on the line. Though mostly a romantic comedy, Colin Clive's character is a pathologically jealous control freak, intelligent with unlimited wealth on his side, and thus presents a very real threat to Irene and Paul. And despite tales of Clive's late-stage, Norman Maine-like alcoholism, stories of a drunk actor propped into frame from unseen stagehands and the like, his performance is genuinely unnerving.

Criterion's Blu-ray of History Is Made at Night includes a wonderfully detailed restoration demonstration that makes plain the problematic surviving film elements and all the work that went into its demonstration. The black-and-white film sources primarily a 35mm nitrate duplicate negative with a 35mm safety fine-grain to fill in the gaps. Restored in 4K, the transfer required thousands of fixes to eliminate scratches, dirt, debris, etc. and the results are quite impressive. The uncompressed mono soundtrack was remastered from the nitrate optical soundtrack. Optional English subtitles are provided and the disc is Region "A" encoded.

Supplements abound, including a new featurette with Hervé Dumont (author of Frank Borzage: The Life and Films of a Hollywood Romantic) and critic Peter Cowie; a 2019 interview with critic Farran Smith Nehme about Borzage; 1958 audio excerpts from an interview with the director; a 1940 radio adaptation starring Boyer; and an affectionate booklet essay by critic Dan Callahan.

A remarkable film still deserving a wider audience, History Is Made at Night is a DVD Talk Collectors Series title.