Not long before director Bertrand Tavernier's death just last month, he left cinephiles the invaluable My Journey Through French Cinema ( Voyage à travers le cinéma français, 2016), a marvelous three-and-a-half-hour documentary so good that he followed it up with an even longer eight-hour series, Journeys Through French Cinema ( Voyages à travers le cinéma français, 2017-18), his final credit. Both are now available in the U.S., on Blu-ray from the Cohen Media Group.

The second series itself is wonderful. Cohen's presentation is another matter, problematic and ultimately quite frustrating. To begin with, the two completely different shows confusingly have almost identical cover art, but the bigger problem involves the English subtitling. The original French version identifies clips via text in the bottom right-hand corner of the image with the movie's title, along with the director's name and release year. Sometimes, if Tavernier is discussing a screenwriter, cinematographer, or the music, those names appear simultaneously at the bottom left-hand corner. All of this material, naturally, is in French.

The Cohen Group did not obtain a textless video master, minus all this material in French, often leaving no room at the bottom of the frame for the English subtitles. As a result, the English subtitles constantly shift between the top and bottom of the frame, which is distracting, disorienting, and so clutters up the image with text sometimes even the actors' faces are obscured by subtitles.

Worse, because the original French graphics identifying the movies have been retained, most of the movies are identified only by their French names, even many famous ones. The main appeal of the program like this is that it inspires viewers to seek out these films based on all the tantalizing clips and Tavernier's infectious enthusiasm, but since the films are rarely identified in English, one can only pause the disc and laboriously copy the French titles down to research later. The disc menu is useless: episodes are simply numbered with no description of the topics covered; episode titles are given on the back of the case, but they don't match those in the show itself and are vague and generally unhelpful. The Internet Movie Database lists ten episodes but the two-disc set has eight (apparently several were combined; each episode on the set runs just under an hour). An insert or menu option listing all the films (or directors) covered in each episode would certainly have helped matters.

As with the earlier My Journey Through French Cinema, one need not be an expert to become entranced, even though Tavernier clearly was targeting a primarily French, rather than international audience, referencing names, places, and historical events English-speaking audiences will be less familiar. And, even more so than the first program, the deeply personal nature of the work showcases many forgotten or undervalued films and filmmakers. The big classics of French cinema, movies like Grand Illusion, The Four Hundred Blows, etc., get brief mention or not at all. A long segment on the director Henri-Georges Clouzot, for instance, highlights lesser-known works with no mention at all of Les Diaboliques and only a short excerpt from The Wages of Fear, his best-known works; a segment about Marcel Carné focuses on fascinating, underrated films while pretty much ignoring Children of Paradise and Port of Shadows, Carné's acknowledged masterpieces. 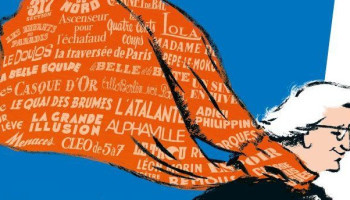 As before, the focus of Journeys Through French Cinema are movies that shaped Tavernier's views on French cinema during his youth and filmmakers he got to know as a young man, either through interviews he conducted, filmmakers he worked under, or through connections and friendships he made while working as a press agent for Rome-Paris Films. Some films and filmmakers highlighted here he disparaged 50-60 years ago but learned to appreciate over time. Some directors he knew only at the disappointing ends of their careers, only to discover great early works, sometimes with shockingly progressive attitudes in filmmakers who became reactionary zealots late in life.

The series is only vaguely chronological, Tavernier free-forming with this or that filmmaker, sometimes for a good 20 minutes, sometimes much less, and sometimes diverging from his subject to discuss his or her politics, collaborations with screenwriters, composers, or actors. He's mostly effusive but persuasive when critical. In one clip he points how editing ruined an otherwise outstandingly effective tracking shot. In another segment he compares Julien Duvivier's Pépé le Moko (1937) with its Hollywood remake, Algiers (1938), running side-by-side to demonstrate how the remake ruined the original's final scene. Archival interviews with the filmmakers themselves are interjected, along with occasional comments from other film critics and historians.

Episode titles (in the film, not on the packaging) are: "Jacques Becker, Macao, and Neighborhood Theaters," "The Children of the Liberation and the Cinematheque," "Cinema Under the Occupation, Before and After the War," "The New Wave of the Occupation," "The Songs / Julien Duvivier," "My Bedside Filmmakers: Grémillon, Ophuls, Decoin," "My Bedside Filmmakers Part 2: Guitry, Pagnol, Bresson, Tati," "The Forgotten," "The Unknowns," and "My ‘60s."

Tavernier covers a lot of ground, from France's forgotten, earliest color film to one intriguing feature, L'Heure de la vérité, from the 1960s apparently never released, despite the presence of name actors like Karl Bohem and Brett Halsey. There's a great section on women directors, an in other places he traces the careers of Jewish filmmakers forced into hiding during the Occupation, and others who fell on hard times after the war due to changing tastes but whose careers were bolstered by sympathetic colleagues. He acknowledges how many filmmakers deliberately or accidentally documented aspects of Parisian or rural life long gone, and praises the authenticity of some directors and actors in authentically capturing the working poor and bourgeoise. He admires the naturalism uncommonly present in films from the early ‘30s, or the appearance of a black man in one ‘30s film playing the kind of role unthinkable in Hollywood at that time.

With its opening titles collage, reminiscent of Kevin Brownlow and David Gill's Hollywood, the flurry of French stars and images conjures much emotion. Jean Gabin, the Spencer Tracy of French cinema, is seen in clips stretching from the early 1930s through 1971's Le Chat; Danielle Darrieux is followed from barely out of her teens through late middle age. Some actors turn up again and again in a wide range of roles, many unexpected, like Maurice Chevalier playing straight, unsavory characters far removed from his image in America.

Could Tavernier have known that his days were numbered, and wanted to make a final statement on an art he tireless devoted himself to? Regardless, the film strikes one as a kind of double-dip: it's both a great record of Tavernier's thoughts and passions, and a testament to French cinema at its most vibrant.

The Blu-ray of Journeys Through French Cinema, with eight episodes presented on two discs, is problematic for reasons described in detail above. Visually, the presentation is much better than My Journey Through French Cinema, with less motion problems that plagued that earlier release. The film clips mostly look great, with only a handful of titles up-rezzed from standard-definition. Audio this time is LPCM 2.0 stereo, and the English subtitles are not removable on this region "A" encoded set.

The lone supplement is a trailer. As noted above, a detailed breakdown of the episodes would have helped mightily.

As before, Journeys Through French Cinema had this viewer taking notes on tantalizing movies I've not yet been able to see, and looking up filmmakers and actors I wanted to learn more about, so in that sense the series accomplishes exactly what it sets out to do. It's so good, in fact, it's Highly Recommended despite the many problems with Cohen's presentation.