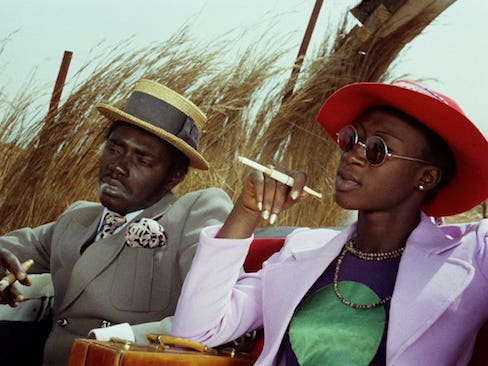 Touki Bouki (The Journey of the Hyena, 1973) was originally released on a double-feature Blu-ray by Criterion Collection a little over seven years ago, within the first box set for Martin Scorsese's World Cinema Project. Now, it stands alone on its own disc, with a higher encode bitrate and a few additional extras.

In my review of the film in 2013, I called it "a concoction that calls to mind Pierrot le fou crossed with El Topo." Struggling now to narrow down the flavor even further, I'm tempted to throw in a dash of the anti-capitalist social satire of Mandabi and the picaresque absurdity of Macunaíma. The inevitable punchline is that I feel the need to pile up all these comparisons because Touki Bouki is wildly unique. Frustratingly so, for someone trying to explain the film with some coherence.

Director Djibril Diop Mambéty has made a film that is bizarre, poetic, and full of loaded symbols that refract and expose different meanings as he creates new juxtapositions in his editing. If nothing else, Touki Bouki is a master class in editing; Mambéty's storytelling approach shifts from subtle and observational to absurd and mind-expanding, largely through the selection and juxtaposition of his shots.

The narrative spine of the film centers around two outsiders, Mory (Magaye Niang, Karmen Gei) and Anta (Mareme Niang, Xala). Mory is a drifter, with an overwhelming yearning for freedom, while his tomboy girlfriend Anta is a student disillusioned not only by her ordinary family but by the would-be revolutionaries she knows at school. Together, they decide to escape to Paris -- maybe to escape repression, or maybe just to see what else the world has to offer. Their fantasy is scored by an incomplete snippet of a Josephine Baker recording, "Paris, Paris," that recurs throughout the film and repeats like a record with a skip. Because of the awkward repetition of this snippet, the effect is both lilting and discomfiting.

Mory rides around on a custom-ornamented Triumph motorcycle with the horns of a zebu on the handlebars. The zebu, a local breed of cattle, is seen frequently in the film -- initially, in a graphic scene where several are slaughtered in a blood-soaked abattoir -- and there is clearly a connection between this indigenous animal and the people of Dakar in Mambéty's mind. The violence visited upon the zebu is meant to be seen as kin to the violence visited upon the Senegalese people.

This suggests why Mory and Anta would plot to leave for Paris, but the film treats their schemes to con or steal money for the trip as largely cartoon-y and ridiculous. The most amusing section involves a quickly conceived plan to steal the clothes of a local big shot, referred to as "the fat man," while he takes a bath. The fat man, who is gay and looking for companionship, implores Mory to join him in the bath so he can wash Mory's back. Later, when calling the police to report the theft of his clothes, the fat man flirts intensely with the police inspector as well.

The film also gets some solid mileage out of Mory and Anta riding around in the fat man's car like wealthy big shots, although eventually the characters -- and the film -- have to weigh the implications of their emigration fantasy.

I am docking my original 2013 score for Touki Bouki by half a star. This is not for any major failing of the film; I was just slightly less dazzled by its style this go-round. It's impossible to deny the depth of feeling and the passionate explosion of youthful energy that the film contains. I just found myself wishing the film had a more consistent focus so that its moments of shocking power weren't too often buffered by meandering experimentation. 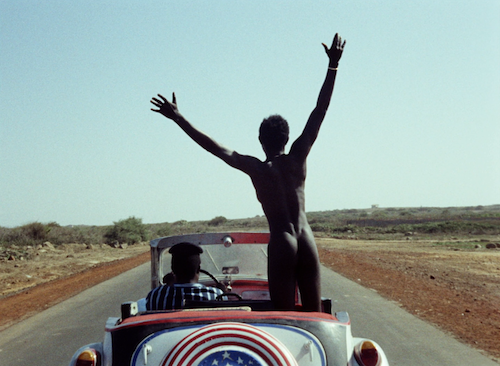 The Blu-ray
Touki Bouki is packaged with a fold-out featuring an essay by Ashley Clark.

The Video:
Sourced from the same 2K restoration that was the basis of the 2013 Blu-ray, this AVC-encoded 1080p 1.37:1 presentation has the advantage of a much higher bitrate (thanks to getting its own dedicated disc). As before, there are a few moments of discoloration and a few discernible scratches on the edge of the frame, but these are barely noticeable flaws in an overall vibrant and textured presentation. Strong colors and well-resolved film grain.

The Audio:
The LPCM Wolof and French mono audio (with optional English subtitles) shows some limitations of age and due to the low-budget nature of its shoot, but the restoration is excellent, allowing the eccentric, semi-Godardian mix of dialogue, source music, ambience, and score to really shine.

Final Thoughts:
Touki Bouki is an art film with a classic '70s midnight-movie sensibility. It is political, personal, perverse, and poetic. If you already own the World Cinema Project box set, you don't necessarily need to go for this updated stand-alone disc (although the Contras' City short is excellent and worth seeking out). If you haven't already plunked down for that set, though, this presentation is excellent. Highly Recommended. 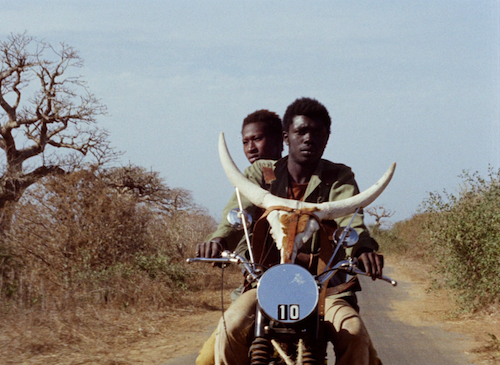