Kino // Unrated // May 11, 2021
List Price: $24.95 [Buy now and save at Amazon]
Review by Stuart Galbraith IV | posted May 24, 2021 | E-mail the Author
Though it starts out promisingly enough, the Budd Boetticher Western Horizons West (1952) quickly descends into a tired reworking of the Cain and Abel, brother-against-brother story, variations of which often pop up in Western film.

The picture is worth watching for its cast, its Technicolor and production values, but they're not enough to save it from its general mediocrity. 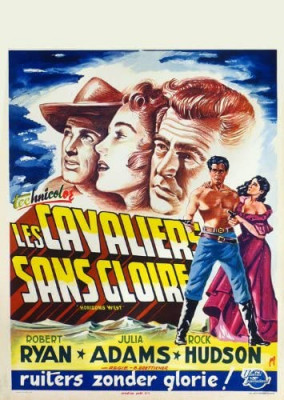 The promising early scenes have Dan Hammond (Robert Ryan), younger brother Neil (Rock Hudson), and neighbor "Tiny" McGilligan (James Arness) heading back to Austin, Texas after four years of serving in the Confederate Army during the Civil War. Neil and Tiny assume they'll easily resume life as before, working the cattle ranch owned by Dan and Neil's father, Ira (John McIntire), but Dan, cynical and restless after the South's defeat, wants something more.

Louis Stevens's screenplay might have worked had they found life under the Reconstruction far more difficult than they imagined, but back home with Ira and his wife, Martha (Frances Bavier), all is as before, a bit dull but peaceful and even idyllic. Neil and Tiny effortlessly slip back into their pre-war lives, while squirrely Dan is compelled to move on to something more glamorous.

Unbelievably, he gets a no-questions-asked $1,000 unsecured loan from banker friend Sam Hunter (John Hubbard) -- How many of us could do that in 2021, let alone the 1860s? Dan foolishly loses it all in a high-stakes poker game with rancher Cord Hardin (Raymond Burr), whose wife, Lorna (Julie Adams), Dan covets. Eventually he rallies a band of homeless veterans (Confederate and Union), deserters, and criminals squatting near a riverbed into a joining him in rustling Hardin's cattle, Dan quickly amassing a big enough fortune to build a land-grabbing empire. As Dan loses his soul to insatiable greed, can Neil and Ira bring him back?

Stevens's script is unusually muddled. It's not immediately clear, for instance, during the opening scenes that Dan and Neil are brothers, nor later on are the means of Dan's spectacular financial climb. He promises his men "big money" but doesn't bother to explain to them or the movie audience just how he plans on achieving this, as if at some point Stevens's original plan was to keep this aspect of the story a mystery to be revealed later on. Almost no rustling is shown, and later when Dan takes advantage of Reconstruction loopholes to legally steal land away from farmers and ranchers, that's also inadequately dramatized. He simply becomes very wealthy within minutes of screentime. Though among the squatters is Dan's old army friend Dandy Taylor (Dennis Weaver), who vouches for Dan's abilities, after that first meeting Dan hardly interacts with any of his men, none of whom seem annoyed that Dan's rich while everyone else is working, apparently, for peanuts.

The cast is the primary draw here, with Robert Ryan's embittered Texan better than the story deserves, though even he can't make sense of this confusing, largely unmotivated character. Julie Adams's character is superfluous, but she's so gorgeous (in Technicolor, yet) she's a welcome presence whenever she's onscreen. Raymond Burr, at this point in his career playing heavies almost exclusively, demonstrates how he became a go-to actor for such parts during the first-half of the ‘50s: he's excellent, and his mind games with Ryan are the most interesting scenes in the picture. Rock Hudson, in an early role, is serviceable but his character is dull. James Arness and Dennis Weaver (in his film debut), future stars of Gunsmoke, share no scenes; Arness's likeable lug is far removed even from the characters he'd generally essay pre-TV, but he's in there slugging. (Amusingly, at 6'7", Arness even towers over 6'4" Rock.) Former star Mae Clark, of Frankenstein and The Public Enemy has a memorable if small role as a grieving widow.

The film has good production values and Technicolor gives it a boost, but the film is pretty much a bust.

Kino's Blu-ray of Horizons West presents the film in its original 1.37:1 standard format. Filmed in 3-strip Technicolor, the image is variable, with the color matrixes out of alignment much of the time, though at other times the color and sharpness look great. The DTS-HD Master Audio (mono) is decent. Optional English subtitles are provided and the disc is Region "A" encoded.

Supplements are limited to an audio commentary track by critic Toby Roan, and a trailer.

By no means terrible but its strong cast is seriously let down by a weak, overly-familiar and muddled screenplay. Rent It.