Le Magnifique (aka The Man from Acapulco)

Kino // Unrated // June 8, 2021
List Price: $24.95 [Buy now and save at Amazon]
Review by Stuart Galbraith IV | posted May 25, 2021 | E-mail the Author
Going in, I think I was expecting director Philippe de Broca's Le Magnifique (also known as The Man from Acapulco, 1973) starring Jean-Paul Belmondo, to be something like a cross between their Buster Keaton-influenced That Man from Rio (1964) and Belmondo's later The Professional (1981). It's generally regarded as a spoof of spy novels and movies, a genre that by 1973 had grown pretty stale (both the spy stories and their spoofs), but about 25 minutes in the movie begins moving in unexpected directions and never really stops. The screenplay was mostly written by Francis Veber, later a director himself, whose French comedies were often remade by Hollywood: The Tall Blond Man with One Red Shoe, A Pain in the Ass, La Cage aux Folles, etc. However, Veber objected to de Broca's changes to the script, particularly those involving the female lead, played by Jacqueline Bisset, and had his name removed from the credits. 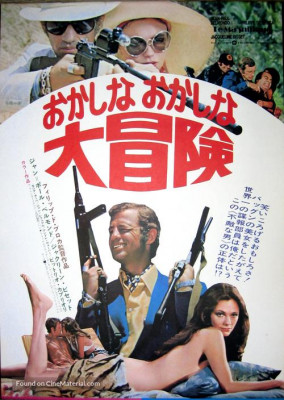 (This film is best viewed with no foreknowledge of its plot, so if you haven't yet seen it, you may want to stop reading here.)

The movie opens in Acapulco, where French superspy Bob Saint-Clair (Belmondo) is on the trail of Albanian spies, teamed with glamorous beauty Tatiana (Bisset) in a fight against villain Colonel Karpof (Vittorio Caprioli). Henchmen lurk around every corner, in every palm tree, but Saint-Clair easily dispatches them all. All this is done on an almost cartoon level, with some very clever sight gags and, unexpectedly, a proto-Tarantino level of blood and gore.

About 20 minutes into the film, at just about the point where all this starts becoming wearying, some action is interrupted mid-scene, and its revealed that what the movie audience is watching is a visualization of pulp espionage writer François Merlin (also Belmondo), madly trying to finish his 42nd Bob Saint-Clair novel before a Monday morning deadline. In his drab Paris apartment shy François turns to bookish neighbor Christine (also Bisset), a sociology graduate student from England, as his inspiration for Tatiana, and his toupee-wearing, womanizing breath mint-popping publisher, Pierre Charron (also Caprioli) for Karpof. Many other characters, such as unhelpful plumbers and electricians refusing in turn to fix his bathroom, become other characters in the crazy spy story.

Frustrated writer François is delighted to discover that Christine is keenly, even obsessively interested in his Bob Saint-Clair novels, though she sees them as raw material for a graduate thesis. Emboldened as well as smitten, François's emotions begin impacting the imagined events in Mexico, and François later even begins sabotaging his suave hero, turning him into a klutz worthy of Inspector Clouseau.

The concept runs out of steam a little toward the end, but the screenplay, de Broca's direction, and the lively, ready-for-anything performances of the main cast go a long way. Mathlin's cinematography is particularly outstanding: bright and colorful, as good as anything in the best James Bond movies for the spy scenes, and desaturated, dark, drab, and overcast for everything in Paris, a real visual contrast effectively realized.

Belmondo, probably the most physical actor of French cinema of this era, famous at the time for doing nearly all his own stunts, doesn't overly exert himself here as in That Man from Rio, but his comic timing as Bob Saint-Clair is great. The disc includes both the original French audio track and an English dubbed version, but you most definitely will want to avoid the latter. In the French version, Bisset speaks fluent if accented French while neither actor's voice is heard on the English track, with Bisset's sounding only vaguely like her while the actor voicing Belmondo is, emphatically, not him.

Kino's Blu-ray of Le Magnifique looks splendid, an outstanding transfer with bright primary colors and, in other scenes, muted and desaturated where appropriate. The disc presents the film in its original 1.66:1 widescreen. The DTS-HD Master Audio (mono) is also strong, with French (with optional English subtitles) and English audio tracks (discussed above) on this Region "A" encoded disc.

Supplements are limited to an audio commentary track by critics Howard S. Berger, Steve Mitchell, and Nathaniel Thompson, plus a trailer.

Clever and funny, Le Magnifique is a good movie to spring on those expecting a standard if well-made spy spoof. Though that's essentially its reputation, the film turns out to be much more than that, and the presentation is basically flawless. Highly Recommended.