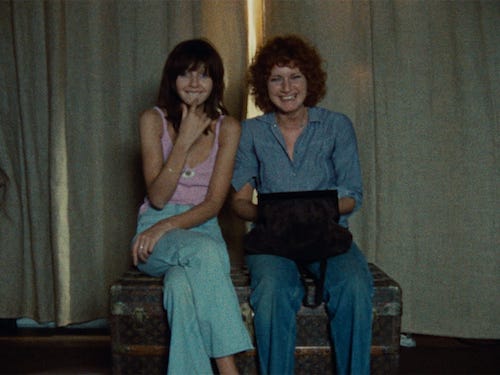 When someone first tried to describe the 1974 film Céline and Julie Go Boating (Céline et Julie vont en bateau) to me, they wrongly told me that it was a three-hour-plus film with no story. Of course, the film is so playful and odd that pinning down the narrative isn't the easiest task. It slithers all around, turns self-reflexive, and then essentially undoes itself. But that's not the same thing as not having a story; storytelling is almost the whole point.

Céline and Julie centers on two women who meet by chance on the streets of Paris. Daydreaming librarian Julie (Dominique Labourier) notices frazzled, funky fashion plate Céline (Juliet Berto) dashing through a park, dropping accessories along the way. Like Alice following the white rabbit, Julie chases Céline. This initial encounter plays out like a postmodern one-reeler, with Céline evading her pursuer and Julie evading notice in increasingly silly ways (at one point, Julie puts Céline's dropped scarf in front of her face as though it would somehow hide her). With both competitors well aware of who they are up against, there's a flavor of playful seduction to this cat-and-mouse game that sets a subtly complex tone.

Is this a film about the start of a wacky female friendship? Is it a clandestine queer film about a couple of cantankerous lesbians? Director Jacques Rivette (Duelle) innately resists easy narrative answers in most of his filmmaking, so it's easy to see the central relationship in either light. He has stated that he wanted Céline and Julie to be a classic comedy duo in the vein of Abbott and Costello, and has there ever been a fussier fussy-bottom on screen than Lou Costello? (I kid!)

There are various little episodes scattered throughout the film -- Céline dresses up as Julie to meet up with her new friend's old flame, Julie takes over Céline's sleight-of-hand act to audition for some producers with questionable motives -- but the film eventually coalesces around a kind of ghost story that Céline and Julie might be manifesting themselves. Céline is constantly telling tall tales throughout the film, but one particular yarn she spins, about an old house with some buried secrets, comes to life. Both women are separately drawn to this mystery house, where they see the same melodrama play out every day: Bulle Ogier and Marie-France Pisier compete for the affection of widower Barbet Schroeder, in a situation lifted from Henry James's novel The Other House. Céline and Julie's memories are immediately wiped once they leave the strange old house, and they can only recall details of what went on through the tasting of a magical sweet (more shades of Lewis Carroll).

After a few different trips to this house, they have seen enough to realize that a small girl gets murdered at the end of each repeated day. Rather than witness this horror again, they decide to take the story into their own hands and rescue the girl from her ghostly fate. However, true to their comedy-duo roots, Céline and Julie partly bungle their way through the day's events, trying to piece together their vague memories of what is supposed to happen as though it were a play script. A few times they "forget their lines" and have to improv their way out.

Rivette frequently likes to explore the form and function of performance -- his previous mega-epic Out 1 had many long acting-exercise sequences -- and this film continues his theme of "playing," whether it's on stage, as part of Céline's magic act, or in a more basic childlike way (i.e., the leads' infantile horsing around together), or in the pseudo-performance the duo enacts in the haunted house. This constant playfulness makes the film an infectious joy to watch, even if every moment doesn't necessarily connect tidily to the whole. This is a film that bypasses standard narrative logic in favor of the instinctive and unconscious.

Other writers who have thought about this film longer than me place Céline and Julie Go Boating on a cinematic continuum of influence that includes Věra Chytilová's Daisies as a precursor and David Lynch's Mulholland Drive as a stylistic result. Yeah, that sounds about right.

I would also nominate Céline and Julie to join the ranks of Richard Linklater's early work and Rio Bravo in the canon of great "hangout movies," whose atmosphere and characters linger longer with audiences -- and invite further rewatches -- instead of a clever or concise plot.

To that end, Rivette's masterstroke here is the cast he has assembled. The chemistry of real-life friends Berto and Labourier is palpable in every frame, and watching them, we feel like we are being bestowed the privilege of joining their gang of two. Ogier, a Rivette regular, plays her soap-operatic role to a T, especially during a woozy monologue as her injured hand bleeds out into a bathroom sink. Pisier and Schroeder are both fascinating because their characters seem designed to be bland and well-meaning, but both actors deftly incorporate little hints of surprising menace as more of their characters are revealed.

Céline and Julie Go Boating is self-reflexive and subversive. Also: silly, sassy, and somewhat smutty. Strange, too... so you might not like it. But if you can tap into its infantile-adult world of everyday magic and unrestricted role-playing, you're in for a major adventure. 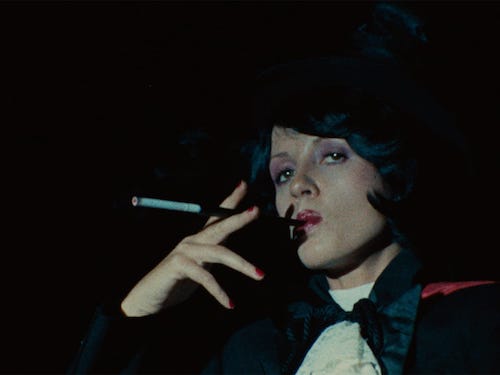 The Blu-ray
Céline and Julie Go Boating is a 2-BD set, with the feature film and commentary on disc 1 and all the other bonuses on disc 2. A booklet featuring essays by Beatrice Loayza and Juliet Berto is also included.

The Video:
The AVC-encoded 1080p 1.33:1 presentation does an excellent job at accentuating the grainy 16mm texture and reproducing the rich colors of the wardrobe and decor. Detail is sometimes a little soft, but it was clearly a loose, semi-improvised production.

The Audio:
The French LPCM mono audio (with optional English subtitles) is cleanly reproduced and has a half-stylized / half-naturalistic flavor. I don't honestly remember very much score (although the credits tell there was some), but the ambience and dialogue are consistently well-balanced and effective.

- Recorded a few years ago for the BFI Blu-ray, this is a thoughtful and thorough scholarly commentary, and far from dry.

Final Thoughts:
Céline and Julie is so odd and unique yet satisfying and entertaining that it is tempting to call it Jacques Rivette's best film. I dare not succumb to that temptation, with Out 1 and La Belle Noiseuse in such close contention. Still it's probably the closest thing to an arthouse crowd-pleaser he made, with its odd amalgam of genres and giddy, playful performances. Criterion's presentation is technically strong and truly loaded up with tons of fascinating extras. All in all, this edition is pretty darn definitive. DVD Talk Collector Series. 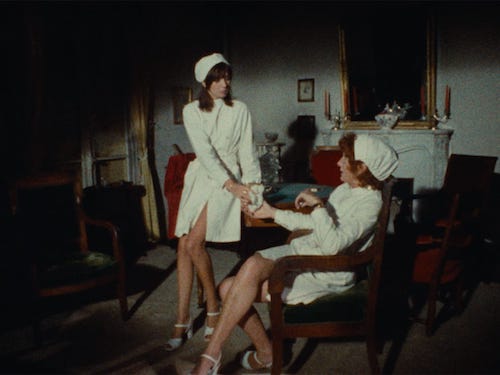