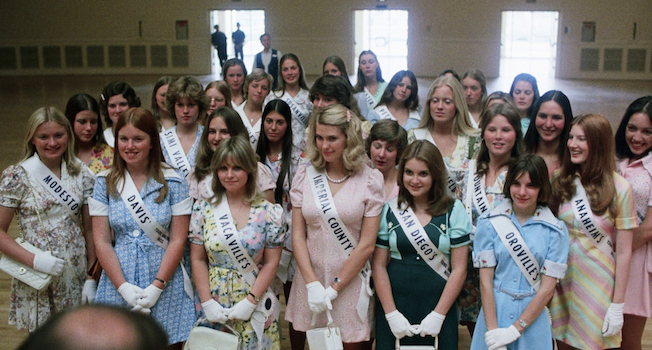 A jokier take on the same mid-'70s American disillusionment that informed Robert Altman's Nashville, Michael Ritchie's 1975 ensemble film Smile is essentially an absurd comedy played bone dry. Set during the week of the Young American Miss beauty pageant in middle-of-nowhere Santa Rosa, California, the film flits between episodes in the lives of the contestants and some of the organizers.

Bruce Dern, as Big Bob Freelander, is essentially the main character. Big Bob is a car salesman who seems like the kind of fella who has been selling so long, he believes every word that he says. Big Bob is one of the judges of the pageant, and he is bizarrely devoted to it. Knowing that, cynical viewers might be tempted to peg Big Bob as a high schooler-chasing perv -- many of the film's male characters certainly seem driven by prurience -- but Big Bob is perhaps more oddly driven by what he perceives to be the ideals of the pageant. He has bought into the American Dream, with all its attendant corniness, kitsch, and consumerism. Dern's performance suggests that part of Big Bob perceives his way of life might be hollow, but he just ignores that part.

Matching Big Bob's enthusiasm is pageant organizer Brenda DiCarlo (Get Smart's Barbara Feldon), who is much happier leading her young charges than coping with her drunk and depressed husband, Andy (Nicholas Pryor), also Big Bob's old friend. Andy feels smothered by the hypocrisy and mediocrity that surrounds him; also, he is dreading an upcoming ceremony where the local Jaycees will make him kiss the ass of a dead, plucked chicken for aging out of the club. (Unsurprisingly, Big Bob loves that kind of stuff.)

The contestants are all charming young women from the far-flung reaches of California, some played by future stars like Melanie Griffith, Annette O'Toole, and Colleen Camp. Denise Nickerson, Willy Wonka and the Chocolate Factory's Violet Beauregard, is an amusingly naive young singer who is overwhelmed by the prospect of performing with live musicians. Big Bad Mama's Joan Prather is a good-natured competitor who gradually shows her teeth -- and I don't mean smiling -- once it becomes clear she might actually have a chance of winning. Maria O'Brien, the daughter of D.O.A. actor Edmond O'Brien, plays a Mexican-American contestant who cartoonishly leans into her "ethnic" heritage by making big bowls of guacamole to present as gifts.

It's all vividly realized, but if there's one fault in the tapestry woven by director Michael Ritchie and writer Jerry Belson (a TV veteran who co-wrote the original Fun with Dick and Jane), it's that there is more focus on the men outside the contest than the young women in it. Indicative of this viewpoint is a subplot involving Big Bob's pre-teen son Little Bob (Eric Shea), who becomes obsessed with shooting pics of the girls undressing; he gets more screen time than most of the female cast.

Nonetheless, the film is stacked with delightful performers, like dance legend Michael Kidd as a choreographer who is slumming it on this show, Geoffrey Lewis as the penny-pinching head of the Jaycees who just wants the pageant to make money, and The Jeffersons' Paul Benedict as a busy-body mortician.

Much like Ritchie's 1972 political satire The Candidate, Smile is a film that took more than one viewing to click for me. The style feels closer to a fly-on-the-wall documentary than broader mockumentaries like Waiting for Guffman or Drop Dead Gorgeous, and I'll admit that the first time around, I was left wondering what this flick was even about, let alone what was supposedly funny about it. Watching now, I think this initial reaction might have been triggered by the naturalistic direction. Ritchie does not come across as someone who wants to goof on it all; like Big Bob, maybe he likes some of this American Dream idealistic hogwash, only he has since started listening to the part inside that tells him it's hollow. So his take is a little more even-tempered, but not toothless. The point is, this time around I laughed out loud. A lot. 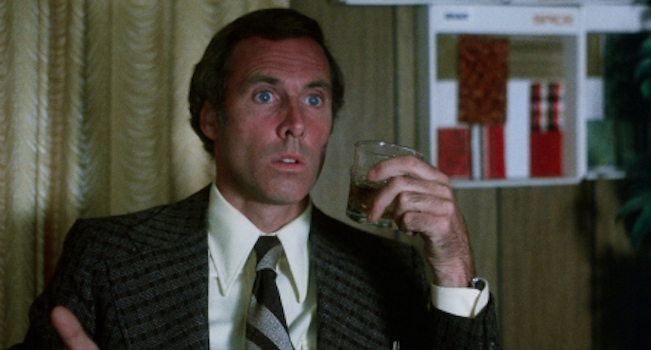 The Blu-ray
Fun City Editions has packaged Smile with reversible cover art featuring two different vintage options and a color booklet with stills and a new essay by Mike McPadden.

The Video:
Sourced from a new 2K restoration, this AVC-encoded 1080p 1.85:1 presentation is a real treat and a major step up from the old MGM DVD. Conrad Hall's cinematography is fairly naturalistic but sprinkled with striking high-contrast images, not unlike his work on Fat City. Strong blacks in the new transfer, with satisfying color and contrast. Some dirt and specks, but no major damage

The Audio:
The main audio offering is a DTS-HD MA 2.0 mono mix that nicely supports the dialogue, effects, and music -- some of it performed by characters in the film or otherwise provided by nostalgic needle-drops. Like all Fun City Editions releases so far, a lossy audio track is also provided, this time a Dolby 2.0 mono (320kbps) track. An English subtitles option is included.

- Brothers Pat Healy (he acted in Cheap Thrills) and Jim Healy (a film curator in Madison, Wisconsin) provide a long-distance commentary that is chock full of interesting tidbits about the making of this film and the folks involved. These guys are film buffs through and through, and it shows in their discussion.

Final Thoughts:
Sometimes subtle and sometimes silly, Smile is above all humane and honest -- and that's what makes it one to check out. Fun City Editions offers another great-looking presentation, and they threw in a delightful new interview with a Hollywood legend. Highly Recommended. 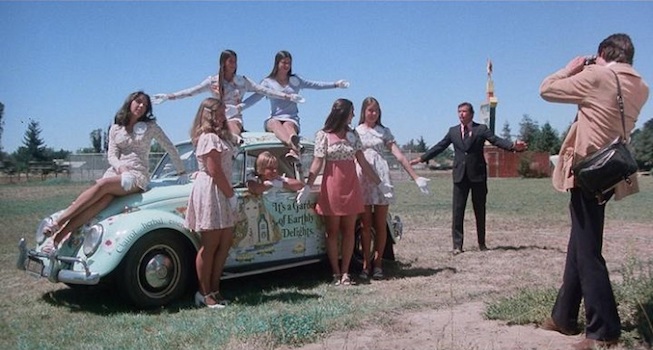