Kino // Unrated // June 1, 2021
List Price: $24.95 [Buy now and save at Amazon]
Review by Stuart Galbraith IV | posted May 28, 2021 | E-mail the Author
Though shot almost like a TV situation comedy from that era, The Green Man (1956) is a very funny black comedy starring the great Alastair Sim as a freelance assassin. Stylistically, the screenplay by Frank Launder and Sidney Gilliat, based on their play Meet a Body, is kind of a bridge between Ealing Studio greats like Kind Hearts and Coronets and The Ladykillers, and the slightly later breed of British comedies starring the likes of Peter Sellers, Terry-Thomas, and the Carry On gang. Like the Carry On films, this is almost an ensemble piece; Terry-Thomas gets third billing even though he's onscreen for probably less than five minutes, which couldn't have pleased Jill Adams, positioned fourth despite being the female lead and in three-quarters of the story. 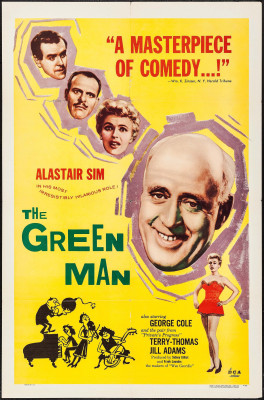 Hawkins's (Sim) latest target for assassination is prominent London businessman Sir Gregory Upshot (Raymond Huntley). In early scenes we see him prepare a bomb in a portable radio, aided by Scottish confederate McKechnie (John Chandos). Hawkins plans to explode the device at a seaside hotel, the Green Man, where Upshot is planning a weekend rendezvous with one of his secretaries, Joan Moore (Eileen Moore, co-star George Cole's then-wife).

Hawkins obtained information about Upshot's schedule by courting his Plain Jane secretary, Marigold (Avril Angers), but she discovers an incriminating carbon copy of Upshot's schedule Hawkins has surreptitiously obtained from Marigold. She announces her intention of confronting her supposed beau, but he arranges to have her mistakenly enter the unoccupied house next door, ordering McKechnie to do away with her there.

The screenplay is fairly droll by itself, but it's the performances that really sell it. Owlish Sim plays Hawkins as supremely confident, calmly using his quick wits to adapt to the ever-changing situation, complicated by both fate and the growing suspicions of Ann and William. Hawkins finds his intellectual dexterity amusing, the way he's able to manipulate others, a man quite happy and contented in his chosen profession.

George Cole was a protégée of Sim's, even living in Sim's house for a dozen years in the 1940s and early ‘50s. He and Jill Adams make an appealing pair, she unhappily engaged to Reginald, though only through the plot complications does she come to realize this, and he determined but naïve. Favorite character players like Richard Wattis (as a doctor), Arthur Lowe (as a radio salesman), and Michael Ripper (as a waiter) add to the fun.

Though he'd appeared, usually uncredited, in films as early as 1933, The Green Man was Terry-Thomas's first major film role. Prior to this he'd become a major radio and stage star, which probably accounts for his unjustifiably prominent billing. In both this and Private's Progress, released that same year, his parts were small but scene-stealing, and he was headlining films within another year or two.

Sim himself had hoped to direct, but that job was assigned to Robert Day, making his theatrical feature debut. The two didn't get along, and reported Basil Dearden directed some scenes but, stylistically, the movie is efficient but visually unremarkable.

Kino's Blu-ray of The Green Man boasts a 4K restoration from the original camera negative, but while that looks splendid, the 1.37:1 standard format presentation is clearly in the wrong aspect ratio, which should be 1.66:1 widescreen, made obvious by the title blocking and headroom above the actors. It does look great, however, and the DTS-HD Master Audio (mono) is also strong, with optional English subtitles provided on this Region "A" encoded disc.

The lone extra is an appreciative audio commentary by David Del Valle.

Not quite in the top rank of British comedies but quite amusing and very satisfying, The Green Man is Highly Recommended.