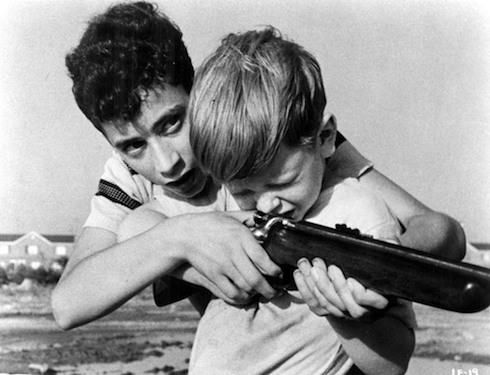 In 2013, Kino released the influential Little Fugitive on Blu-ray, and now they expanded the release to a three-disc set called Little Fugitive: The Collected Films of Morris Engel & Ruth Orkin that includes the filmmakers' other three features, plus some shorts and commercials.

) is slight but undeniably charming. The directing credit is divvied up three ways, between producer-cinematographer Morris Engel, his spouse and editor Ruth Orkin, and writer-producer Ray Ashley, which implies the organic development and guerrilla nature of the production. With its semi-doc style and New York location shooting, Little Fugitive presages hundreds of films, from Shadows to David Holzman's Diary to Ramin Bahrani's earliest features like Chop Shop.

Engel, Orkin, and Ashley's film concerns two young Brooklyn boys who are left alone for a day while their single mother goes out of town to see a sick relative. The older kid, Lennie (Richard Brewster), is galled because he wanted to go to Coney Island and instead he's stuck with the runty Joey (Richie Andrusco). Joey always wants to join in when the older boys are playing, much to their annoyance. Lennie and his friends decide to prank Joey to get him to leave them alone, so they make Joey think he shot and killed Lennie while playing with a rifle (wow... yeah, it was a different time). The prank backfires on Lennie, however, when Joey decides to run away and hops the nearest subway train to end of the line -- which is Coney Island.

Much of the film shows little Joey exploring life all over Coney Island, from the midway to the boardwalk to the beach. A montage of Joey eating all manner of junk food is immediately followed by a shot of him tracking down the nearest men's room -- presumably, this is the polite '50s way of implying that the kid hurled all the junk right back up again. Obsessed with westerns, Joey discovers a pony-ride attraction of which he can't get enough. After learning the ropes of returning used Coke bottles for deposits, he starts collecting glass like crazy just to feed his pony-ride addiction. Fortunately, this tips off the man running the attraction that he needs to track down Joey's guardian -- and a happy ending is almost assured.

Engel and Orkin both came from a background in still photography, so it's unsurprising Little Fugitive is mainly notable for its disarming and natural visual style. Although essentially a fiction film, the flick offers a lot of time capsule pleasures: the look of Coney Island and the New York subway back in the day is a particular treat.

), thanks to sequences at the Bronx Zoo, the Statue of Liberty, Chinatown, the Museum of Modern Art, Rockefeller Center and a few other iconic spots. Although it seems like Lovers and Lollipops didn't catch on as widely as Little Fugitive did, I appreciated the filmmakers' attempt to make something a little more dramatically complicated without greatly overburdening their light, observational style.

At the center of the story is another kid without a father, little Peggy (Cathy Dunn). Peggy is playful, mischievous, and bratty in ways that feel adorably (and sometimes maddeningly) real. Peggy's mom Ann (Lori March) has started seeing a new man, Larry (Gerald S. O'Loughlin), and Peggy isn't terribly pleased about it. She doesn't entirely hate Larry, but she constantly tests him in different ways: disappearing and hiding in public or refusing a gift on a whim.

Engel and Orkin balance Peggy's growing pains with the increasingly serious and slightly bumpy courtship between Ann and Larry. One of their most striking sequences about the pair involves no sight-seeing; it just features Ann in an empty house planning an impromptu dinner for Larry. Larry's friend is considering buying the house, and Ann falls in love with the look of it. So they decide to spend an evening there. Ann sends Larry off to get some hot dogs to roast in the fireplace. It's a cute moment for the adults to get to play house. Ann fashions a dinner table out of cardboard and remodeling fixtures that are laying around and even picks some modest wildflowers from the backyard to set the table. And then Larry doesn't show up. For what seems like a long time. Ann hears a car approach... and then pass. She hears an ambulance... but never sees it materialize. Engel and Orkin give Ann no dialogue here, because they don't need to. The character's loneliness, insecurities, and fears are all relayed elegantly in Lori March's reactions as Ann. Eventually, Larry does return, and the vision of him with an arm full of hot dogs, buns, and fixins carries a more loaded meaning than anyone might reasonably expect. 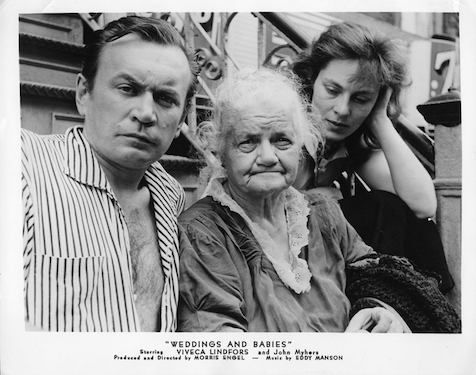 Considering Engel and Orkin's years working in still photography, cameras and picture-taking are frequent motifs in their films. However, photography takes center-stage in 1958's Weddings and Babies (

). The main characters are photographers in a business that specializes in the titular subjects. With a subject so close to the filmmakers' hearts, one would expect a supremely personal film; if it is, somehow director Morris Engel is strangely inarticulate in expressing that personal message for once.

More likely the film is a victim of its makers' success. The previous two features were shot silent with the dialogue dubbed in later, and while it creates an atypical atmosphere, it allowed Engel to create dynamic images on the fly. The budget of this film could support the technical upgrade to synchronized sound during filming, but one feels Engel too often locked down into boring and visually flat dialogue scenes. This was also Engel's first feature without Orkin as co-director and editor, and her sense of pacing is sorely missing.

The Adventures of Don Juan's Viveca Lindfors adds some marquee value as photo assistant Bea, longing for the self-same weddings and babies she spends all day photographing. Her business and romantic partner Al (John Myhers) is too focused on getting ahead in the photography racket to propose. Lindfors and Myhers are game and make a convincing enough couple, but Engel strands them in seemingly improvised scenes that feel more like strained acting exercises than organic moments of people interacting. On top of the romantic conflict, Engel throws in a subplot about Al's aged mother who feels abandoned in a rest home by her son. Chiarina Barile is the real deal as the old Italian mama, but the whole story thread comes off as unconvincingly sentimental and melodramatic.

Engel's silent images captured on the streets of Little Italy -- especially footage of the San Gennaro street festival -- show signs of life, but sadly most of the film is uninspired and asleep.

The final feature by Morris Engel in the set is making its home video debut. I Need a Ride to California (

) was shot in 1968, finished a few years later, but never released publicly until nearly a half-century later. It sort of makes sense, since the film is so steeped in a particular flower-child headspace that it probably looked dated almost immediately. (Also, the ending is an out-of-nowhere shocking bummer.) The film is a loosely episodic, impressionistic, and self-reflexive look at the (many!) relationships of a young woman from California (Lilly Shell) as she tries to find love, find inspiration, and find her way in a turbulent and schizophrenic New York landscape.

It's kind of rough going at first, thanks to an onslaught of '60s-trendy stylistic tics and so-so pop songs with on-the-nose lyrics underlining the action. But the arrival of Rod Perry (future star of TV's S.W.A.T.) as a playful love interest for Lilly similarly signals a return to the playful shooting and editing strategies of the best stuff in Little Fugitive and Lovers and Lollipops. There is still plenty of purple prose, navel-gazing, philosophizing, and overwrought folk music to wade through, but when Engel puts still cameras in his actors' hands and lets them roam the streets and parks of New York, it feels natural and right.

Engel also folds in a meta aspect of him and his crew filming the action and manufacturing the scenes which are supposedly based on real events. It's a welcome distraction when the drama gets rote and boring, and it also offers the surprising recurring image of the proper-looking Morris Engel overseeing this hippie production that sometimes looks like the end product of a college student getting stoned.

Now, about that ending. *SPOILERS* The film within the film is completed, and Lilly is given flowers by the offscreen filmmaker (presumably voiced by Morris Engel). She shares her flowers with a beau and passersby as she heads home. On her way upstairs to her apartment, she is mugged and raped. Whether this is based on a real-life incident for the main actor, or intended as something allegorical about what the world does to artists and dreamers, or a cynical comment on life in the city, or whatever, it just creates a bizarre, heavy dissonance at the end of a fairly light film. I was left feeling puzzled and icky after that ending. *END SPOILERS* 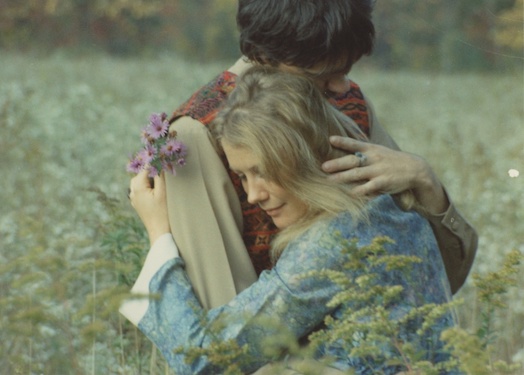 The Blu-ray
The 3 Blu-rays of Little Fugitive: The Collected Films of Morris Engel & Ruth Orkin are housed in a standard-sized keepcase, with the first two discs on a back-to-back hub in the middle. The first disc is identical to the Little Fugitive Blu-ray released by Kino in 2013. Lovers and Lollipops and Weddings and Babies share the second disc, and I Need a Ride to California and the short films can be found on disc 3.

The Video:
Little Fugitive, Lovers and Lollipops, and I Need a Ride to California are all AVC-encoded 1080p 1.37:1 presentations; Weddings and Babies is framed at 1.66:1. The first three films from the '50s are all shot on black-and-white 35mm and have held up fairly well over the years. Scattered dirt, scratches, and density issues let you know this was low-budget independent filmmaking, but the image is generally stable and clean. Lovers has some intermittent flaws that look sort of like hot splices, but might be some sort of development or printing error. Nonetheless, detail and film texture are both well-preserved. Similarly, the color film I Need a Ride to California has some minor scratches and dirt throughout, but has a richly saturated and detailed look overall.

The Audio:
All four features are presented in LPCM 2.0 mono audio mixes, with optional English SDH on the latter three films. There are no subtitle options for Little Fugitive. All four soundtracks are relatively limited due to age, plus they are subject to various other factors caused by the loose, low-budget filming. Lovers and Lollipops probably sounds the best of the four, with the post-synchronized dialogue and music well-supported and without distortion. The earlier Little Fugitive has intermittent crackle and mild distortion. The latter two films featuring scenes shot with naturalistic sync sound both have recording issues, like audible camera noise or muffled dialogue. As a counter-balance, the musical score is fuller and better supported in the latter two films.

Special Features:
There are no subtitle options for any of the bonuses, shorts, or commercials.


Final Thoughts:
The first two features in this set are landmarks of American independent filmmaking and welcome entries in the canon of great films about New York City. The other two features are more hit-and-miss, but demonstrate the same keen photographic eye and creative spirit that fuel the earlier work. The shorts, home movies, and commercials included in the set are a delight. Highly Recommended. 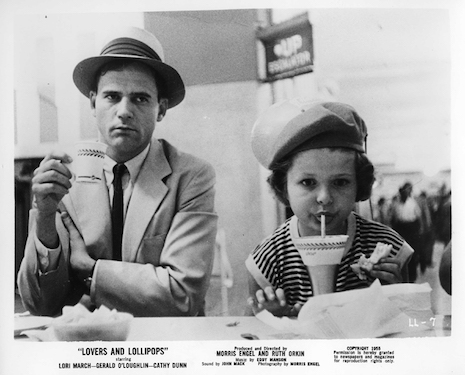