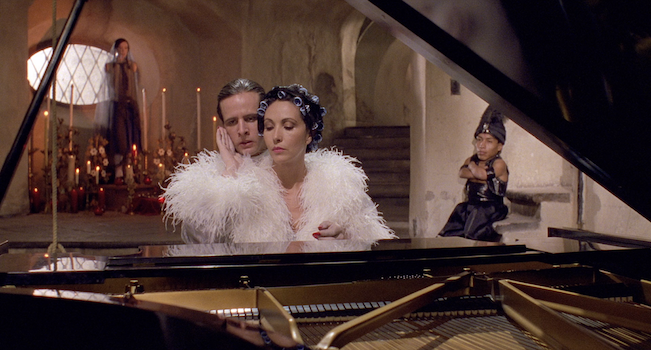 1989's Santa Sangre is one of the highlights in the tumultuous career of madman visionary Alejandro Jodorowsky. Released roughly a decade after his previous film (the little-seen Tusk), Santa Sangre became an instant cult sensation. In his time away from cinema, Jodorowsky worked in high-concept comics, and Santa Sangre's combination of the operatic, the existential, and the luridly horrific feels like the kind of thing that could have made a great graphic novel. Even better for us cinephiles, Jodorowsky was able to bring it vividly to the screen.

Although Santa Sangre might be Jodorowsky's most narratively straightforward film, it goes in enough jaw-dropping directions that I hesitate to explicate its plot. Alas, some things must be described for any synopsis or analysis to make much sense, so let me just say I recommend skipping to the technical review and checking out the film for yourself, leaving those surprises intact.

If your temperament demands that you know something about a film before pressing play, I'll tread lightly. The film concerns a disturbed young man, called Fenix and bearing a large phoenix tattoo on his chest. Continuing a tradition Jodorowsky began by putting his young son Brontis in El Topo, the role of Fenix is played in a long flashback section as a ten-year-old by Jodorowsky's son Adan, and then played as a young adult by another son, Axel. (Brontis has a cameo at the beginning of this film and a fourth son, Teo, appears in a small part as a pimp.)

Fenix is the son of circus performers. His father Orgo (Guy Stockwell) is a knife-thrower, and his mother Concha (Blanca Guerra) is a trapeze artist. When a new curvy tattooed assistant (Thelma Tixou) catches Orgo's fancy, Concha is driven to a maniacal rage. Concha's confrontation results in a Grand Guignol bit of violence that mentally scars the witnesses -- little Fenix and the tattooed woman's mute daughter Alma (Faviola Elenka Tapia, later played by Sabrina Dennison) -- and leaves Concha alive but without arms.

As a young man, Fenix is deeply traumatized and suffering one of the worst cinematic Oedipus complexes since Norman Bates. He and Concha have developed a theatrical act where he moves behind her and performs as her arms. Worse, Concha demands that Fenix continue to supply her with arms in daily life -- knitting, playing the piano -- and even seems to have a psychic power over Fenix's hands. Whenever Fenix feels lustful stirrings toward a woman, Concha intervenes and uses her psychic control to force Fenix to kill the woman.

Some instances of intense gore might tempt one to brand the film as a highbrow slasher film (one presumes that's what Italian giallo veterans and credited co-writers Roberto Leoni and Claudio Argento had in mind), but Jodorowsky brews together all manner of horror classics, including Freaks, The Hands of Orlac and its numerous remakes, and most explicitly, Universal's The Invisible Man. Fenix becomes obsessed with emulating Claude Rains's see-through scientist -- presumably so that he can escape from his mother and all the trauma.

In Jodorowsky's hands, however, none of this feels like an easy reference. Like the best of David Lynch, Santa Sangre's images feel blasted onto the screen straight out of a dream, uninterpreted and undiluted. Icons and symbols float through the film but squirm away from easy explanation (except, naturally, the phallic symbols). The image of young Alma in a funereal black version of her stage costume and mime make-up -- reproduced in the original US home video art for the film -- is the kind of startling and uncanny sight that one could unpack (maybe with the help of a therapist) for a long time.

With its English-language dialogue and familiar horror movie trappings, Santa Sangre reasonably should appeal to viewers outside the arthouse and cult movie niches. The uninitiated might be gobsmacked by the intensity and insanity of Jodorowsky's vision, but I don't doubt they will be changed for the better. 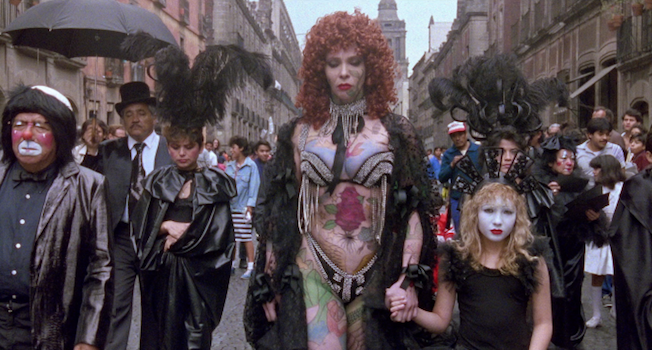 The 4K UHD/Blu-ray
Severin's new 4K release for Santa Sangre comes in a limited-edition 4-disc set. Disc 1 (4K UHD) and 2 (BD) contain the same material: the feature film plus a few bonuses. Disc 3 is an additional BD of more bonus features (many previously available on Severin's 2011 Blu-ray, with some new additions). Disc 4 is a soundtrack CD. The discs are packaged in a digipak housed in a box with slightly embossed art. 8 postcard-sized lobby card reproductions are included inside.

The Video:
The UHD disc offers an HEVC-encoded 2160p 1.85:1 presentation with SDR. Even without the High Dynamic Range treatment, the new restoration of this film is wildly impressive. Detail and depth are extraordinary, and the colors are strikingly vivid and saturated. Only a few scattered shots underwhelm -- and they look like they might have been optically altered in the original film or are maybe just pulled from later-generation film material. I do not have Severin's first Blu-ray release to compare, but other online reviews state the detail and clarity on the new AVC-encoded 1080p Blu-ray disc utterly blows away the earlier release. I would believe it.

The Audio:
On both the UHD and BD, the main English audio soundtrack is offered either in a new DTS-HD MA 5.1 surround mix or the original DTS-HD MA 2.0 stereo. The remix has been given a slightly more imaginative design, with the original stereo mix relatively anemic and often quite center-focused. (Almost a mono mix with stereo effects thrown in superficially.) There also two alternate dubs: Spanish DTS-HD MA 2.0 mono and Italian DTS-HD MA 2.0 mono. Only one subtitles option: English SDH.

(Disc 1/2) - Carried over from Severin's 2011 Blu-ray. It's a fast-paced and info-packed chat. Jones prods Jodorowsky to discuss the thematic ideas behind his images; sometimes Jodorowsky acquiesces. On the other hand, in response to the question, "Why include an elephant's funeral?," Jodorowsky replies, "Why does an apple tree give apples?" Jodorowsky is pretty frank in general, admitting, for example, that he hated Guy Stockwell because the actor was an angry drunk.


Final Thoughts:
A visionary work that shatters expectations for a horror film, an indie film, and even an art film. Truly a must-see. The 4K restoration is a jaw-dropper. Severin's new expanded edition is generously stacked with informative anecdotes for viewers interested in the practicality of making a film like this. The whole package is outstanding. DVD Talk Collector Series. 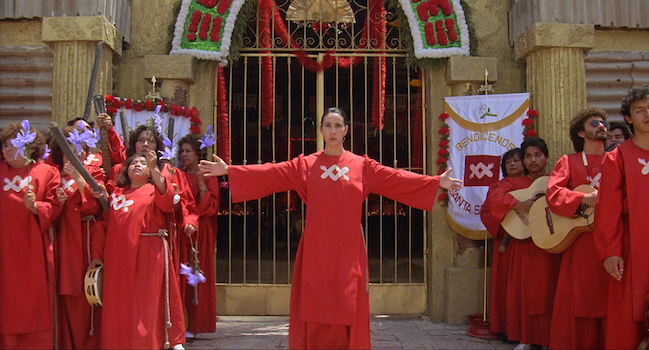