Kino // PG // May 4, 2021
List Price: $24.95 [Buy now and save at Amazon]
Review by Stuart Galbraith IV | posted June 11, 2021 | E-mail the Author
A slight comedy about a Hollywood film crew engulfing a small New York State university town with activity and glamor, Sweet Liberty (1986) was M*A*S*H star Alan Alda's second feature as writer-director-star, and first after that long-running series came to an end. Alda had earlier written and starred in (but did not direct) The Seduction of Joe Tynan (1979) and followed that up with The Four Seasons (1981), neither well remembered today but back then movies that earned positive reviews and, in the case of The Four Seasons, exceptionally good box-office. Sweet Liberty doesn't bear much comic fruit, but I liked it a bit better than the only other time I saw it, 35 years ago when it was new. 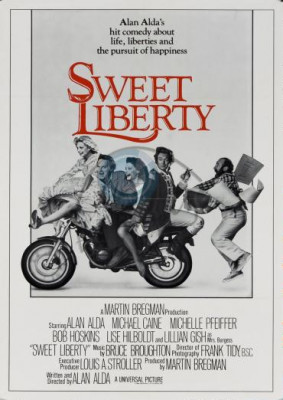 All of Sayville, New York is abuzz with excitement as a caravan of movie people arrive to shoot a film on location there, also called Sweet Liberty. College history professor Michael Burgess (Alda), who wrote the historical novel from which the movie is based, initially is more interested in convincing his girlfriend, fellow professor Gretchen (Lisa Hilboldt), into moving in with him. However, Michael becomes incensed after reading Stanley Gould's (Bob Hoskins) screenplay adaptation, pure commercial slop that has turned Michael's exhaustively researched novel, set during the Revolutionary War and revolving around the relationship between American Mary Slocum and Englishman Banastre Tarleton, into a lewd sex romp.

Working with eager-to-please Stanley, Michael has little luck pressuring the film's condescending director (Saul Rubinek) into making any changes to the script, so instead he appeals to the lead actors, movie stars Faith Healy (Michelle Pfeiffer), playing Mary, and Elliott James (Michael Caine), playing Tarleton. Michael is enchanted by method actress Faith, who stays in character and has extensively researched the part on her own. Conversely, Michael doesn't quite know how to handle Elliott, a Lothario bedding down all the local women and causing other mischief. Meanwhile, Michael is also distracted by his doddering, ancient mother, Cecilia (Lillian Gish).

Written at a low point in Alda's personal life, when both of his own parents were ill (actor Robert Alda died less than two weeks before Sweet Liberty premiered), maybe Alan Alda found the frivolous nature of the project a source of relief. His well-established TV image as an "Honorary Woman" for his support of the Equal Rights Amendment and the feminist movement is sort of on display here, with two strong female characters while Alda's is sensitive if unconsciously controlling.

The most interesting aspect of the movie is Michael's infatuation with Pfeiffer's character. In early scenes the Method actress stays in character, and Michael is charmed beyond words to see the character from his novel and from history come vividly to life, and in such an attractive woman yet. He's oblivious to her celebrity status. When she invites him over for dinner, he's crushed to then find her out of character, making profanity-laced demands over the phone with her agent, but attracted to her again, later, when he realizes how dedicated she is to her character.

The movie also works in the mostly realistic way it depicts a movie crew on location. The camera picks all kinds of interesting details in the background, showing how the town is convincingly transformed from modern university town to an 18th century village. Also, undoubtedly a decision by Alda, the first assistant director is an African-American woman. However, the intolerant director played by Rubinek is a less realistic stereotype, as is Bob Hoskins's uncouth screenwriter, though Hoskins himself is appealing.

Lillian Gish had been acting in movies since 1912; Sweet Liberty was her penultimate film. Generating laughs from goofy lines emanating from her addled, elderly brain would seem a cheap shot, but Alda's screenplay avoids this, and Gish is too good an actress not to give it careful consideration. Their scenes together have a quiet, eccentric charm, though the movie might have been better had it been entirely about them, rather than a shoehorned subplot.

Michael Caine is charming as Elliott but too irresponsible to be believed, behavior that would have made even a star of his stature uninsurable to too costly to the production to ever hire. However, Caine adds a knowing amusement in scenes revolving around his celebrity status, something the actor could, no doubt, relate to. Good also in early roles are Law & Order's Dann Florek and John C. McGinley as Revolutionary War reenactors, their cheery, enthusiastic fidelity to history coming into conflict with the realities of movie production.

Kino's Blu-ray of Sweet Liberty is a fine encoding of the 1.85:1 widescreen film, remastered without any significantly age or damage issues. The DTS-HD Master Audio is also strong, with optional English subtitles provided on this Region "A" encoded disc.

Supplements are limited to a trailer and an audio commentary track featuring film historians Daniel Kremer and Nat Segaloff.