Kino // Unrated // June 29, 2021
List Price: $24.95 [Buy now and save at Amazon]
Review by Stuart Galbraith IV | posted June 16, 2021 | E-mail the Author
Given the talent involved, My Little Chickadee (1940) is generally regarded as a disappointing pairing of two of the biggest comedy names of the 1930s, Mae West and W.C. Fields. Each had been a huge star at Paramount, West literally saving the company from bankruptcy with She Done Him Wrong (1933) and other films, she earning as much as $300,000 per movie, more than the entire cost of most early-‘30s productions. Fields, meanwhile, the highest-paid entertainer in Vaudeville and on Broadway at various points earlier in the century, finally found feature-film success in thirteen mostly hilarious Paramount features (including such classics as It's a Gift and You're Telling Me!) that were inexpensive to make and thus highly profitable.

Poor health kept Fields off the screen for several years in the second-half of the ‘30s, while West's career was damaged by the enforcement of Production Code censorship. When Fields's health improved, slightly, he became a sensation on radio as ventriloquist dummy Charlie McCarthy's nemesis on The Chase and Sanborn Hour, which in turn led to film contract at Universal. Though hardly the prestigious film company that Paramount was, at Universal Fields made three of his funniest films: You Can't Cheat an Honest Man (1939), The Bank Dick (1940), and Never Give a Sucker an Even Break (1941), his last starring film before ill health again limited his film work.

Having found success with another faded Paramount star, Marlene Dietrich, in the Western comedy Destry Rides Again (1939), Universal tapped West for this almost-follow-up, her first movie in several years, at a greatly reduced salary of just $50,000. (Fields, the bigger star by this time, got $150,000, though West received top billing.)

Its screenplay written primarily by West, My Little Chickadee favors her slightly over Fields, the plot revolving around her character, resulting in something like a 55-45 split in terms of their screentime. While not up to the level of either star's best work, it's funny and a crowd-pleaser, better than its reputation would suggest. 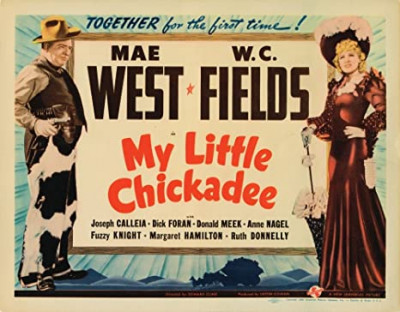 Like Destry, My Little Chickadee is a Western spoof, with West playing voracious man-eater Flower Belle. Aboard a crowded stagecoach robbed by a masked bandit (Joseph Calleia), the suave Latino kidnaps the voluptuous Flower Belle but later that evening she returns to town unharmed and, temporarily, sexually satisfied by her latest conquest.

However, town busybody Mrs. Gideon (Margaret Hamilton, fresh from The Wizard of Oz) witnesses the bandit leaving Flower Belle's second-floor room at the home of her aunt and uncle, and the resulting scandal sends her packing. Aboard a train bound for Greasewood City, she encounters conman Cuthbert J. Twillie (Fields), flirting with him in the belief that he's carrying a satchel full of loot, and almost single-handedly she thwarts an Indian attack. Before the train reaches its destination, she "marries" the smitten Cuthbert, those aboard unaware that the "minister" conducting the ceremony (Donald Meet) is actually a gambler friend of the saucy blonde.

The production did not go smoothly, though less so during filming than immediately before and after. Fields once described West as "a plumber's idea of Cleopatra" while West had little use for Fields, whom she regarded as a B-picture comedian compared to her earlier, A-list Paramount productions. Both West and Fields wrote their own material, not limited to their own dialogue but often most or all of their scripts. West was credited with the story and/or screenplay on seven of her eight Paramount films, while Fields often used amusing aliases on his films (e.g., Mahatma Kane Jeeves). As documented in James Curtis's excellent W.C. Fields: A Biography, after several aborted attempts at a script, West herself took the task upon herself, and the results left Fields flummoxed: while predictably masterly with her own dialogue, her lines for Fields were equally spot-on. "During my entire experience in the entertainment world," he later said, "I have never had anyone catch my character as Miss West has. In fact, she is the only author that has ever known what I was trying to do." Though Fields would amend and alter slightly his scenes, the script was far superior to earlier attempts and, primarily, hers.

Yet, in the opening credits, both West and Fields are equally credited with the script, justifiably angering West, who may have been responsible for as much as 80% of it. Further, West's hopes that the project would lead to bigger solo films at Universal (as had happened with Dietrich) went nowhere, even though the film was a box-office success, earning nearly $2 million. She starred in just one more picture, The Heat's On (1943), and that was for lowly Columbia, another comedown. She wouldn't return to the screen until the excretable Myra Breckenridge (1970) and the equally bad (but fascinating, and more purely Westian) Sextette (1978), made when the actress was nearly 85 years old, a minor detail impressively oblivious to the young male suitors clamoring for her attention.

Kino's release of My Little Chickadee, derived from a 35mm nitrate composite fine grain and 35mm dupe negative, is an impressive transfer, the picture looking far better than any previous home video release. The DTS-HD Master Audio (mono) is also above average. Optional English subtitles are offered on this region "A" disc.

Supplements are limited to trailers for other Mae West titles (not noted on the disc is the recent announcement by Kino of numerous Fields titles over the next two years) and an audio commentary track with critics Alexandra Heller-Nicholas and Josh Nelson.

Not the best film of either star, My Little Chickadee still offers plenty of big and little laughs and is Highly Recommended.