Cohen Film Collection // Unrated // May 18, 2021
List Price: $29.95 [Buy now and save at Amazon]
Review by Stuart Galbraith IV | posted June 18, 2021 | E-mail the Author
Originally planned as project for director Frank Capra, It Happened Tomorrow (1944) was directed instead by French import René Clair (Le Million, À nous la liberté) during that filmmaker's ten-year stint of British and Hollywood films, including I Married a Witch (1942) and the great Agatha Christie adaptation And Then There Were None (1945). It Happened Tomorrow is at the weaker end of this spectrum, but it's a pleasant and clever fantasy-comedy-romance. 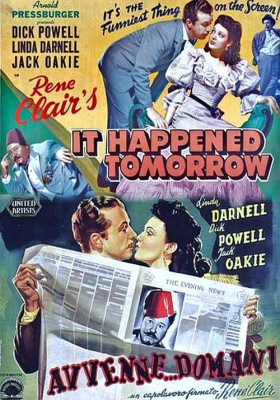 Based on Lord Dunsany's one-act play The Jest of Haha Laba, and an adaptation by Hugh Wedlock and Howard Snyder (when it was tied to Capra), the story begins in the present day, on the Golden Wedding Anniversary celebration of Larry and Sylvia Stevens (Dick Powell and Linda Darnell, in old-age makeup). While their legacy, scores of children, grandchildren, and great-grandchild await their arrival, the old couple gently argue upstairs in their bedroom, Larry wanting to Reveal All about the strange circumstances surrounding their first meeting, she wanting to suppress Larry's wild claims which even she refuses to take seriously.

In flashbacks, in the 1890s, Larry is an obituary writer for a newspaper and anxious to become a full-fledged reporter. At a party there, Pop Benson (John Philliber), who maintains the paper's bound collection of past editions, gives Larry a copy of the following day's evening edition. Gradually recognizing its authenticity, he uses its information to scoop the other writers of the day's top news: the robbery of an opera house's box-office by armed gunman. While this lands him a promotion at the paper, it also gets him in trouble with the law: Police Insp. Mulrooney (Edgar Kennedy) is convinced Larry is part of the robbery gang.

At the same time, Larry becomes smitten with Sylvia, she working as one-half of a clairvoyant act with her Uncle Oscar (Jack Oakie). Pop Benson appears and reappears sporadically, each time handing Larry a copy of the follow day's evening edition, and each time causing Larry to get into more trouble. Eventually Larry decides to use the future-telling newspapers one last time, to bet on five consecutive horses at the race track in order to build a nest egg for his future bride, but then realizes the top story that next day is of Larry's murder in a hotel lobby.

Similar to lighter episodes of the later Twilight Zone, It Happened Tomorrow is primarily interesting in how it deals with concepts of time and anticipating future events. A wonderful early scene, the after-hours party at the paper among the various writers and copy boys, involves Pop discussing time as inviolate. Time -- past, present, and future -- is already written, Pop argues, even news not yet documented in his archive. In passing copies of tomorrow's editions to Larry, Pop warns that foreknowledge is not necessarily a good thing, and as Larry discovers, there's no way of preventing such written-in-stone destinies. Near as I can recall, this concept had never been dramatized in movies before, though it certainly must have in written science fiction and fantasy.

The script is sometimes very clever in making this work cinematically. Clair himself was generally unimpressed with the film, but considered the climax his best work in Hollywood. Indeed, just how Larry, making every effort to avoid being there, still unavoidably ends up in the hotel lobby moments before his predicted murder is quite ingenious.

Star Dick Powell had outgrown the juvenile leading roles in Warner Bros. musicals that established him as a major star. It Happened Tomorrow was the last of several post-Warner films that mostly cast him in similar parts, including Preston Sturges's Christmas in July, a film with the same kind of energy as here, and Abbott & Costello's In the Navy. Immediately after It Happened Tomorrow, Powell abruptly refashioned his screen image to movie tough guy in Murder, My Sweet (1944), as private eye Philip Marlowe.

Someone attached to the film, maybe Clair, perhaps someone else, drew on the best Hollywood character comedian and bit player talent for the picture. In addition to Oakie, Edward Brophy (as a race track bookie), and Sig Ruman (as a Barnum & Bailey representative) in credited parts, fine if uncredited roles are given to Jimmy Conlin and Robert Dudley (of Preston Sturges's company of actors), Charles Halton, and even Three Stooges foil Bud Jamison, among others. Silent comedian Snub Pollard actually plays two different characters and is easy to spot both times.

Produced independently for release through United Artists, the film was a modest critical and commercial success, but a big hit in Clair's native France.

The Cohen Media Group's release of It Happened Tomorrow presents the black-and-white, 1.37:1 standard frame film in an excellent, near-flawless transfer via a 4K scan. The LPCM 2.0 mono is a bit problematic, with some minor imperfections that are, thankfully, only mildly distracting. Optional English subtitles are offered on this region "A" disc.

The lone extra really isn't, billed as an original trailer, in fact it's a recently-made promotion of the film edited together by Cohen Media itself.

Not quite a classic but still quite enjoyable, It Happened Tomorrow is Highly Recommended.