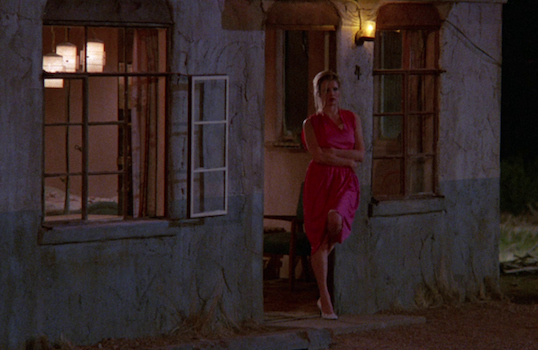 1985's Fool For Love is a moody and oddball melodrama from director Robert Altman's mid-career. This was when he specialized in screen versions of stage plays that stayed fairly faithful to the text. (Other examples include Come Back to the 5 & Dime, Jimmy Dean, Jimmy Dean, Beyond Therapy, and Secret Honor.) Strangely, exploitation legends Menahem Golan and Yoram Globus -- the fellas who brought the world Chuck Norris's most entertaining film and introduced the phrase "electric boogaloo" to the popular lexicon -- bankrolled this quirky arthouse picture, much as they had done with John Cassavetes's Love Streams the previous year.

Altman cast writer Sam Shepard as the lead of his own play, a traveling cowboy named Eddie. At the start of the flick, Eddie pulls his pickup and horse trailer into a desert motel, looking to reconnect with former flame May (a top-of-her-game Kim Basinger). Their tempestuous relationship is evident from the start, as Eddie literally breaks through the door of her room to see her. To see Sam Shepard swiftly charge through the center of a flimsy wood door, like a circus animal jumping through a hoop, immediately sets a slightly unreal, kind of comic but not quite, tone for the piece.

Adding further to the semi-surreal ambience is Harry Dean Stanton as a loopy drunk, known only as the Old Man. He wanders the periphery and spies on the proceedings. The Old Man steals swigs of tequila from Eddie's bottle when the cowboy is not looking and once interjects about his deeply held belief that he is currently married to country singer Barbara Mandrell.

For much of the film's first two-thirds, Fool For Love is a cryptic two-hander between Eddie and May, where they attract and repel each other (sometimes simultaneously), hint at former glories and old betrayals, get gradually drunker, and fight. Shepard and Basinger are both strong combatants, able to bring fire to Shepard's quirky text. The dark secrets of their relationship are finally revealed once a potential suitor arrives in the form of Randy Quaid's milquetoast Martin; Eddie regales Martin with their unsavory origin story, in a sequence that plays like Tennessee Williams and Ingmar Bergman had a long-belated collaboration. You could call it Southwestern Gothic.

For his part, director Altman is a little more visually sedate and aurally simple than usual. The camera does roam and zoom around the neon-lit motel parking lot, but not with the distracting antsiness of, say, Beyond Therapy. And with the dialogue spoken consistently by two characters at a stretch, there's no need for the usual layering up of soundtrack elements -- apart from different spatial placements of the country songs consistently playing on characters' radios. Altman chooses to complicate his approach to flashbacks by having the visual action diverge in both large and small ways from the narration we hear characters deliver -- suggesting a Rashomon-like disparity between memory, story, and fact.

The cyclical nature of May and Eddie's hot-and-cold relationship, as presented in Altman's low-key mise-en-scène, makes a sizable stretch of Fool for Love feel flat and same-y (especially before Randy Quaid finally shows up to alter the dynamic). Still, the film's off-kilter ambience, coupled with the organic intensity of the four main performances, make this the kind of experience that is hard to shake off.

The Video:
The AVC-encoded 1080p 2.35:1 presentation is solid if not stunning. Detail is a little soft throughout (ah, those zoom lenses'll do that!), but depth is decent overall and colors seem appropriately saturated and lifelike. No noticeable encoding or compression issues.

The Audio:
The DTS-HD MA 2.0 stereo audio is well-supported and effectively mixed. It's not heavily reliant on directional effects, but it suitably echoes the semi-natural/semi-strange ambience of the visuals. An English subtitles track is also offered.

(19:47) - Ported over from the 2004 MGM DVD. Altman talks about his experiences making this film and his approach to making films in general. It's a thorough and thoughtful little piece.

Final Thoughts:
With its offbeat tone and edgy subject matter, it's little surprise that Fool for Love has remained on the outskirts of Robert Altman's filmography. However, it's easily one of the finest of his stage-to-screen adaptations, with four strong performances from his tiny main cast. This new Blu-ray presentation isn't too flashy, but it gets the job done. Recommended.