Kino // Unrated // May 11, 2021
List Price: $24.95 [Buy now and save at Amazon]
Review by Stuart Galbraith IV | posted June 20, 2021 | E-mail the Author
After watching the mostly drab series of ‘50s Westerns produced by Universal-International and recently released to Blu-ray by Kino, I wasn't much looking forward to Quantez (1957). Among other things, reviews from the time of its release and more recent reviews describe it as profoundly dull. So it came as a big surprise that the picture, while not a classic, is in fact quite good. Though remarkably short on standard Western set pieces -- most of the film is confined to a darkly lit interior with the only real action coming in the last ten minutes -- the film has strong characterizations with above average dialogue.

Credit for this goes to R. Wright Campbell, brother of busy actor William Campbell, who sometimes appeared in movies written by his sibling. R. Wright Campbell (1927-2000) frequently wrote scripts for producer-director Roger Corman, including Five Guns West (in which he also appeared as an actor), Machine Gun Kelly, Teenage Caveman, The Young Racers, and The Masque of the Red Death. Despite his low budgets, Corman had a knack for finding good screenwriters (Robert Towne, Charles Griffith); except for Five Guns West, all those Corman films mentioned here have interesting screenplays, The Young Racers and Masque of the Red Death being the best of that batch.

I wouldn't be surprised if Quantez was originally written for Corman. There are only seven speaking parts, and since most of it is confined to a single interior and the area immediately outside, Corman probably could have shot it in his usual manner for less than $50,000. Even with the addition of color, CinemaScope and two big stars, Fred MacMurray and Dorothy Malone, as a big studio production Quantez might have cost as little as $400,000, perhaps even less. Campbell at this same time was aiming higher, selling scripts to Kirk Douglas's production company and, eventually, Universal. His first movie there, Gun for a Coward (1957) has miscasting problems but Campbell's script is good; Quantez is significantly better. He was also one of a several writers who worked on Man of a Thousand Faces but after 1957 Campbell mostly went back to working for Corman and, occasionally, wrote for television. After the early ‘70s Campbell turned writing novels and plays. 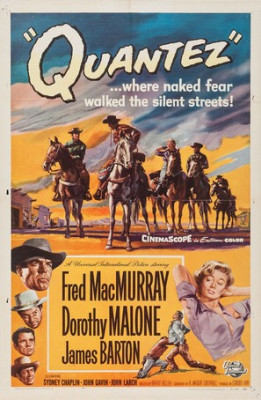 The story opens with a gang of outlaws trying to lose a posse on their trail following a hold-up. Heller (John Larch) is the conceited, crude leader of the gang, with his girl, former saloon singer Chaney (Dorothy Malone), tagging along. Gentry (MacMurray) is the circumspect second-in-command veteran of the gang, while young Teach (John Gavin) is the hired hot gunslinger. Teach is from an apparently wealthy family back east and inexperienced in the ways of the West but quick with a gun. Gato (Sydney Chaplin, son of Charlie), is a white man raised by Apaches after they murdered his family. His Indian blood, Gentry says, is the gang's most valuable asset, given their dire circumstances.

The gang loses the posse, at least temporarily, but Heller overworks their horses and Gato's collapses from exhaustion and has to be euthanized, while the others, spent, are desperately in need of rest and even nursing before they can ride again. The gang make their way to Quantez, a border town close to the Rio Grande but find it mysteriously bereft of people, they having recently fled for some unknown reason. The strange absence of people unnerves everyone. It soon becomes clear to Gato but not the others that Apache renegades, led by Delgadito (Michael Ansara), drove off the residents, and are hiding just outside of town, considering what to do with these unexpected white visitors. Gato slips away and declares his allegiance with the Apache tribe.

While short on action, the characters in Quantez keep it interesting. Larch, the actor typecast as a lout throughout the ‘50s, here plays the typical brutish leader of outlaws: openly abusive toward his girlfriend, a racist toward Gato, whom Heller refers to as "breed" throughout, even though he's white. A self-styled criminal mastermind, he insists on making bad decisions that only create more problems, refusing to even consider better solutions. He threatens to kill each member of the party in turn, including leaving Chaney to face the Apaches alone, even though Heller needs the others if he has any serious hope of getting out alive.

In this environment, MacMurray's Gentry plays it cool and circumspect, diplomatically deflating tensions between Heller and the others, fully aware of when he can push and where he can't and can only patiently wait it out. Teach is a young hotshot in way over his head, but unlike most such characters in Westerns, realizes his shortcomings early on. Malone's Chaney tries using each man in turn to get out of her bad situation with Heller, but finally declares impendence from them all, a minor surprise.

Into this mix, about two-thirds into the film, rides the only other major character, "Puritan," a wandering minstrel and artist who realizes at once that he's stumbled into a nest of scorpions. Nervous but feigning a relaxed manner, he tries singing to the outlaws and, later, paints Chaney's portrait, biding his time until he can attempt an escape. The actor playing him, James Barton, received third billing, despite his comparatively little screentime. Forgotten today, Barton had been one of the top and most versatile entertainers of the first-half of the 20th century, in a league with top stars like Jolson, Sinatra, and Bing Crosby. Barton made only a handful of films, but his performance and character are memorable here.

Campbell's script is so good it survives the uninspired direction of journeyman Harry Keller, though Keller probably deserves some credit for the uniformly good performances. Previously an editor and later a producer, Keller had a mostly undistinguished career and is probably best remembered for shooting additional scenes for Orson Welles's Touch of Evil (1958) after Welles had left the project.

Filmed in CinemaScope, Quantez looks good, not great, but with strong color and not too much digital manipulation that marred several other recent U-I ‘50s titles. This appears to be an older HD master; it's grainier and softer at once, but overall appears accurate. The DTS-HD Master Audio 2.0 mono is decent, and optional English subtitles are offered on this region "A" disc.

Supplements are limited to a trailer and an audio commentary track by film historian Toby Roan.

Some may find Quantez slow-moving and uneventful, but I thought it several notches above average, thanks chiefly to its strong screenplay by underrated writer R. Wright Campbell. Recommended.